The decision by the US authorities to release the terrorist Luis Posada Carriles exposes before the eyes of the world the hypocritical attitude of the United States government to terrorism. 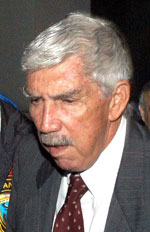 Posada is the author of the 1976 attack that brought down a Cubana de Aviación civilian airliner off the coast of Barbados, which cost the lives of 73 innocent people.

By releasing this criminal, the US authorities have admitted that they support terrorism when this is in the interests of US imperialism. Bush's so-called war on terrorism therefore stands exposed as a shameful deception. In an editorial of April 20, the Los Angeles Times condemned the decision:

"With a misguided decision upholding bail for Cuban-born terrorist Luis Posada Carriles, the U.S. 5th Circuit Court of Appeals in New Orleans has done more than free a frail old man facing unremarkable immigration charges. It has exposed Washington to legitimate charges of hypocrisy in the war on terror.

"By allowing Posada to go free before his May 11 trial, the court has released a known flight risk who previously escaped from a Venezuelan prison, a man who has boasted of helping set off deadly bombs in Havana hotels 10 years ago and the alleged mastermind of a bombing of a Cuban airplane that killed 73 people."

Like Osama bin Laden, Noriega and other criminals and terrorists, Posada carried out his murderous activities in the service of the CIA, particularly during the time when Bush Sr. was that agency's general director.

To this day, terrorist organizations are carrying out their activities on the soil of the USA with complete impunity under the protection of the CIA. All attempts to expose and halt these terrorist activities are sabotaged by the US authorities. We saw this with the arrest and illegal detention of the five Cubans who were trying to prevent the activities of terrorists operating in the USA, and now we see it again in the release of the terrorist Posada.

Posada, who escaped from a Venezuelan prison in 2005, has a long history of involvement in terrorist activities. Apart from the bombing of Cubana Flight 455, he was involved in the Bay of Pigs invasion, the Iran-Contra affair, the tourist bombings of 1997 in Havana, and, according to some, the assassination of President Kennedy.

Carriles has publicly boasted of bombing Havana hotels. He admits trying to assassinate Fidel Castro with C-4 explosives placed in an auditorium packed with students in Panama in 2000. His employees have confessed to the 1976 attack, and declassified FBI and CIA documents have shown that he attended planning sessions. There is therefore not the slightest doubt about Posada's guilt.

The U.S. Homeland Security Department's Immigration and Customs Enforcement agency, set up after September 11, has been granted the most sweeping and draconian powers. It does not hesitate to use these powers against all those who it considers to be enemies of imperialism. In so doing it does not hesitate to violate the civil rights of ordinary US citizens. Yet it treats "friendly" foreign terrorists with the tenderest concern.

Despite the damning evidence of his guilt, Posada has never been charged with crimes of terrorism in U.S. courts. Instead, Immigrations and Customs Enforcement arrested him on a technicality - for lying to immigration authorities after he sneaked in the country in March 2005 and held a news conference announcing his triumphant return. Both Customs and the Justice Department lobbied to keep Posada behind bars, but U.S. law enforcement has never shown a strong interest in trying him for more serious crimes. In reply, Posada's lawyer has warned that if charged, his client would likely reveal extensive collaboration with the CIA.

Writing in the New York Times, Bernardo Álvarez, Venezuela's ambassador to the United States, comments: "Nor has Mr. Posada been charged with the 1976 attack, even though declassified Central Intelligence Agency documents indicate that his role has long been accepted as fact. Instead, he faces charges of immigration fraud, a travesty that could be equaled only by charging Osama bin Laden with entering and leaving Pakistan without a visa. Finally, Mr. Posada was released on bail on Thursday, even though he is an obvious flight risk and a violent terrorist."

The U.S. government and its agencies protected this gangster for months after his illegally entry into the United States. Compare this tender concern for a known terrorist and mass murderer with the harsh treatment meted out to poor Mexicans and other immigrants who are immediately arrested and deported although they have committed no crimes either inside or outside the USA.

After Posada's capture, the government of President Hugo Chávez demanded his extradition, offering 2,000 pages of documentary evidence to substantiate its claims. But twenty-two months have passed since Venezuela formally asked for his extradition, and the State Department has not even acknowledged receiving the request.

The Bush administration has refused to extradite Mr. Posada to Venezuela or Cuba, alleging that it fears he will be tortured. In fact, it is the USA that is practicing torture in the most infamous way in Guantanamo Bay, and is now attempting to prevent access of lawyers to the prisoners who are being held in inhuman conditions without trial.
The Los Angeles Times editorial has pointed to this blatant contradiction: "The United States keeps 385 suspected terrorists imprisoned in Guantanamo Bay, many in isolation and all without U.S. norms of due process. Yet Posada, a confessed terrorist, is sent home with an ankle bracelet."

Even if the US did not want Posadas to go to Venezuela or Cuba, that was no reason to allow him to go free. The court could have refused bail until trial while the State Department keeps searching for a third-party country that would agree to try him on terrorism charges.

What is the reason for the release of Posada? The reason is not concern for Posada. We know that there is no honour among thieves and that George W. Bush would be quite prepared to sacrifice Posada if it suited him. The real reason is fear. Washington is afraid that if Posada Carriles were to be put on trial, he would reveal all he knows about CIA involvement in terrorism in Cuba, Nicaragua and Venezuela - and he obviously knows quite a lot. This cannot be allowed. Therefore a known terrorist and mass murderer is allowed to walk free.

The whole world is now well aware of the double standards of George Bush and the regime at the White House. They talk about "defending democracy" and "waging war on terror" but their actions are determined purely by naked interest and political expediency.

Five years ago, the Bush administration did not conceal their enthusiasm for a coup that overthrew the democratically elected President of Venezuela, replacing him with a junta that suspended the Constitution, dismissed the National Assembly and dissolved the Supreme Court. Fortunately, the Venezuelan people defeated the CIA-inspired coup by mass action. But Bush has never abandoned his plans to overthrow and/or assassinate President Chávez, and terrorist groups are encouraged to operate in Florida under the protection of the US security services.

Similarly, the CIA has for decades attempted to overthrow the government of Cuba and has repeatedly attempted to assassinate Fidel Castro. It has funded and encouraged extreme right-wing terrorist organizations based in Miami, and continues to do so. Only recently a special department was established in Washington to organize actions intended to destabilize Cuba and bring it back under US control after the death of Fidel Castro.

All this is done in the name of "democracy". But the Bush administration's support for the Venezuelan junta five years ago exposed its pledge to uphold and promote democracy around the world as a lie. Now the freeing of Posada Carriles completely exposes Bush's "war on terrorism" for the fraud it is.