Portugal
Share
Tweet
Friday, March 2, witnessed a huge mobilisation of the Portuguese working class with 150,000 workers on the streets of Lisbon protesting against the â€œcentre-leftâ€ Socialist government's economic policies. Not since the glorious days of the revolution of the 1970s have we seen such a mobilisation. 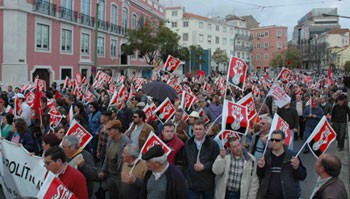 On Friday, March 2, 150,000 workers marched through Lisbon in protest against rising unemployment, falling wage levels, worsening working conditions and in defence of the public services, health, education and social security.

It was the biggest demonstration in the last 25 years. Not since the years of the revolution that started in 1974 have we seen such a sea of working class people gather together under the banner of protest.

Such a demonstration, however, did not come as a complete surprise. The Portuguese economy has been in crisis for the past six years with high levels of unemployment (according to official statistics 8.2% of the work force is off work, but the real figures are well above 10%), falling living standards and deterioration of the public services.

Four governments (both of the left and the right) have been incapable of solving anything. It is not difficult to see why. By applying the same pro-capitalist policies that the former right-wing government tried to impose, the Socialists have proven incapable of doing anything significant, except for claiming credit for achieving the minimal growth of GDP in the past few years (below 1%). And the sacrosanct budget deficit is still not in line with European Union standards, in spite of all the sacrifices forced onto the shoulders of the working class. 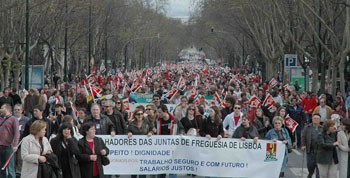 For the past six years all the attacks on the working class have been justified by quoting the need to reduce the budget deficit and stay in line with the dictates of the European Central Bank - Portugal is one of the countries that has adopted the Euro.

But now the limit has been reached! After two years of Socialist Party government, after two years during which the working class has given the Socialists the opportunity to solve the crisis, the workers are saying: "enough is enough"!

Over the past months, the growing number and size of the demonstrations and strikes have revealed how the working class is ready to take serious action in order to reverse the situation. But what does the trade-union leadership do? After last week's hugely successful mobilisation, instead of calling for a general strike to put a stop the bosses' and the government's offensive, they have called for... another day of protest in six months' time! This is an absolutely ridiculous position to take!!! What are they waiting for? More anti-working class policies? Or for the capitalists to solve the crisis for them? 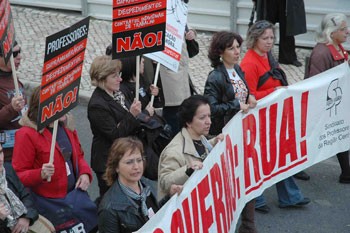 The truth is that they do not have any faith or trust in the ability of the working class to change the world. Therefore they behave as if the only thing possible is to pressurise the government, attempt to limit the damage and wait for the next general elections (that are two years away!) to achieve what only the class struggle and the mobilisation of workers can achieve: the adoption of policies in favour of the interests of the working class.

But that is the thorny question. Under capitalism there is no hope for working class people. And that is even truer in Portugal than elsewhere. The Portuguese national bourgeoisie has always been incapable of developing the country and today, as in the past, its parasitic nature is well expressed by the fact that they do not invest in real production. They would rather concentrate their efforts in speculating on the stock markets, in the banking system and in all sorts of financial dealings. None of this creates a single job and serves anybody's interests, except for the bourgeois themselves.

It is not by accident that in a recent state visit to China, the Minister of the Economy called on the rising Chinese bourgeoisie to invest in Portugal using the argument that here we have the cheapest labour force in Western Europe. That is all the ruling class has to offer the workers: more exploitation. That such words should to be uttered from the mouth of a so-called Socialist minister is simply the graphic illustration of reformist bankruptcy in an epoch where reforms are no longer possible under capitalism.

Let us not forget that Portugal recently emerged as the country in the European Union where the differences between rich and poor are the greatest! This is the dramatic situation facing the people. But these are no longer times of despair. Once again the people are taking to the streets and fighting back. With ups and downs, with a long road ahead of us, the new generation of workers will reclaim the legacy of our fathers and grandfathers and take to the road of revolution, finishing what was not completed during the glorious revolutionary events of the seventies: the abolition of capitalism.

In order to do this and avoid the mistakes of the past - in order to storm the heavens - we must spread the revolutionary ideas of Marxism throughout the trade-union movement and within the working class parties. United under the banner of genuine Marxism, the working class will be invincible, and we shall eventually overcome.