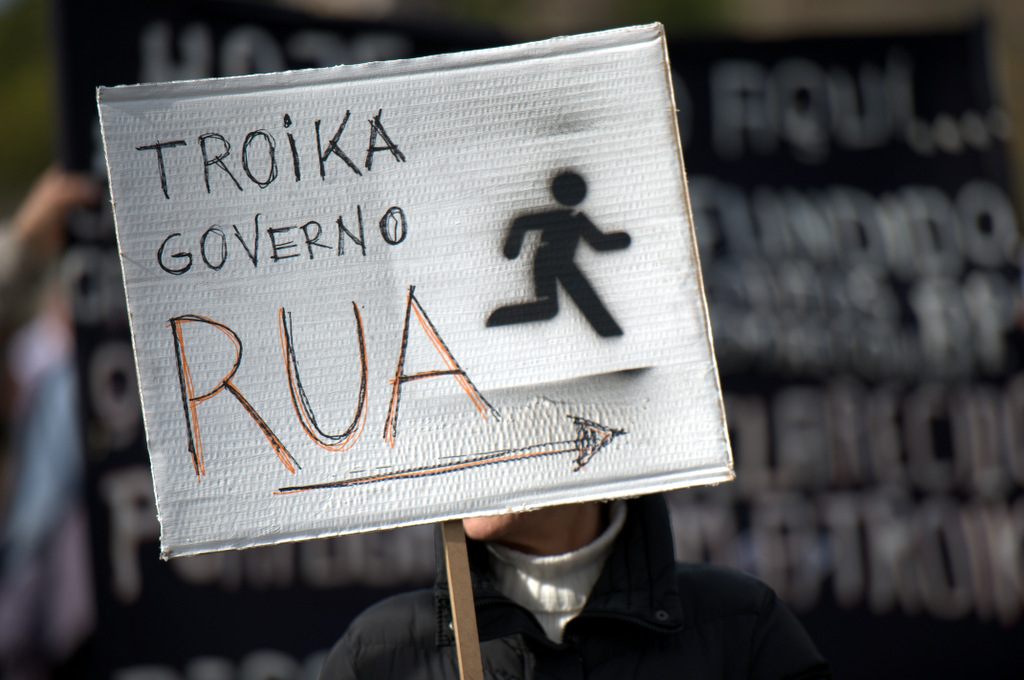 One and a half million people took to the streets in 40 different cities in Portugal on March 2 in protest against austerity cuts and against the troika. This was one of the country's largest ever demonstrations on the same level as the one on September 15 and the huge mobilisations during the revolution in the 1970s.

Figures for attendance differ wildly, but according to the organisers there were anything between half a million and 800,000 in Lisbon alone, with demonstrations throughout the country, from the far away Açores islands to the mainland's main cities of Porto, Braga, Coimbra, etc. Let's not forget that the total population of Portugal is around 11 million.

The slogan or the protest and the organisers, “que se lixe a troika”, can roughly be translated as “screw the troika”. The immediate reason for the calling of this protest was the visit of a delegation from the troika (representing the IMF, the European Central Bank and the European Commission) to review the implementation of the Memorandum of Understanding, the conditions imposed on the country as a result of the 2011 bail out.

Like Imperial envoys inspecting an occupied province, the troika representatives, also known as the “men in black” will spend time in the different ministries and economic authorities of Portugal to make sure the draconian program of cuts, privatisations and attacks on workers' rights is being implemented in every small detail. At the end of their visit they will deliver a report, which will involved even more cuts.

There is a feeling of deep anger and resentment both against the troika and also against the right wing Passos de Coelho government that is implementing the Troika's dictats. The austerity measures being implemented have affected almost all sections of the population and include rises in public transport fares, introduction of fees for the use of the national health service, draconian cuts in social spending, cuts in wages for civil servants and public sector workers, an increase in the rate of VAT, cuts in pensions, etc.

As could have been expected, the result of these policies, since they massively cut private consumption, has been to deepen the recession and hence to make the deficit reduction targets completely unworkable. The economy collapsed by 3% in 2012, after a fall of 1.7% in 2011, and it is forecasted to stay in recession in 2013 with a further 2% fall. The austerity measures have failed, even by its own standards, and have brought suffering to the majority of the population. Unemployment which was below 8% in 2008, just before the onset of the crisis, has now reached an all time record of 17.6% (over 40% amongst the youth).

The Passos de Coelho government attempted to present itself as the “good student” of the troika, fulfilling its targets and going even further than what was required, as opposed to the “unreliable Greeks”. Then in September de Coelho announced an increase in workers' social security contributions while lowering employers contributions. The measure amounted to the loss of one month's wages for many workers. That provocked a swift response on the part of the people, in the form of a spontaneous movement which culminated in the huge protest demonstrations on September 15. The pressure was such that the government was forced to backtrack on that particular measure. That in turn gave the movement a sense that struggle could force the government to retreat, even if partially and temporarily. 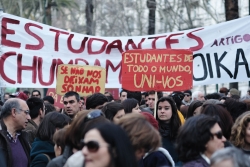 Photo: João Paulo FerreiraThe March 2 protest was preceded by a large demonstration in Lisbon called by the powerful communist trade union CGTP-IN with clear slogans demanding the resignation of the government and posing the need for a left wing alternative.

In an incident over a week ago, anti austerity activists interrupted the weekly speech of the Passos de Coelho in Parliament by singing the revolutionary hymn Grandola Vila Morena from the public gallery (video). This was the song which signalled the beginning of the revolution in 1974 and contains the line “the people has the most power” (O povo e quem mais ordena). This encapsulated the mood of the country against the government. In the days after, ministers and government representatives have had to face activists singing Grandola Vila Morena whereever they appeared.

The march in Lisbon on Saturday was opened by a banner with that very slogan “O povo e quem mais ordena” and most of the slogans demanded the resignation of the government. The huge demonstrations in Porto and Lisbon, wih hundreds of thousands present between them, ended with the signing of the revolutionary song, clenched fists raised (videos of Lisbon and Porto). The mood is one where the people want the end of the austerity policies, they think the only way it can be achieved is by pushing this government out through mass action in the streets.

The demonstration in Lisbon voted a symbolic “people's vote of no confidence”, a statement, which amongst other things declared that it represented “a public statement of the growing will of the people to take the running of the country into their own hands, overthrowing a corrupt power which has existed for several governments” and demanded “as a starting point, the resignation of the government, the end of austerity and the domination of the troika over the people, which is sovereign”.

The ruling class is certainly worried, and there is some talk of asking the troika for some “leniency”, perhaps one more year to achieve the deficit reduction targets. However, the movement is clear on this point, “we don't want these policies, even if they are implemented over a longer period of time”.

The trade union organisations of officers and NCOs, which have also been mobilising against the cuts in the last two years, were also present in the protests, bringing echos of the 1974-75 revolution which was sparked by a movement within the Armed Forces.

There was also a feeling that the struggle against austerity is part of an international movement. The general strike on November 14 which paralised the country took place simultaneously with a general strike in neighbouring Spain and trade union protests in several other countries. Following the example of the February 23 “united tides” demonstrations in Spain, the march in Lisbon was also organised on the basis of feeder marches (“tides”) representing the different sectors affected by the cuts (health care, education, pensioners). There is talk of a coordinated day of action involving at least Spain and Portugal. The experience of the workers and youth in one country is being passed on to another. Despite differences in degree, the brutal austerity cuts being implemented in the so-called PIIGS are basically the same, are having the same impact on working people, and rightly so, the movements in these countries want to learn from each other. One of the slogans heard was “Greece, Spain, Portugal, our struggle is international”. 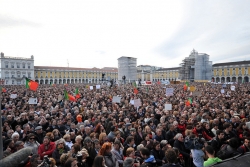 2 March demonstration in Lisbon. Photo: BlocoHowever, even the largest and most militant demonstrations, on their own, will not bring down the government. It is necessary to combine these shows of strength of the popular feeling against cuts (and there is talk of another one being organised on the anniversary of the revolution on April 25), with strike action to bring down the government. There have already been 3 general strikes in Portugal in the last 3 years, paralysing the country. It is now the time for the trade unions, particularly the CGTP, the left parties which are opposed to the cuts, the Communist Party and the Bloco de Esquerda, toghether with the different anti austerity campaigns, to organise a sustained plan of action, including a 48 hour general strike, with the clear aim of bringing down the government, the repudiation of the debt (as opposed to its renegotiation or auditing) and the reversal of all the cuts and attacks implemented in the last few years.

This would pose the question of what is the alternative once the government is gone. The right-wing is extremely discredited and the socialdemocratic leaders of the PS, though they formally supported the protest are also thoroughly discredited as they carried out the austerity measures in the previous government, and have only been very recently forced to take up a position of very mild opposition . If the Communist Party and the Bloco were to offer a clear program against the crisis of capitalism, linking the struggle against cuts and austerity to struggle for socialism, they would be enormously strengthened and could win an early election.

A placard from today's anti-austerity protests in Portugal: "I prefer horses in lasagna to donkeys in government." twitter.com/klaaskatkop/st…