The Polish courts' decision to de facto ban legal abortions has provoked an enraged response from workers and youth (both men and women), who are fighting back against this reactionary attack.

The PiS (Law and Justice Party) government in Poland, led by right-wing Catholics and Nationalists, have for years tried to carry through extreme laws against abortion, under pressure from the Catholic Church. Any attempts so far have been resisted by mass mobilisation of predominantly young and working-class women on the streets.

22 October, however, marks a turning point. The PiS took its provocations and attacks one step too far. Due to the highest rise in cases of coronavirus since the start of the pandemic, the government had banned gatherings of more than five people, be it indoors or outdoors.

It then decided to carry out what it struggled to implement for years. It is no longer legal to terminate pregancies on the grounds of feotal defects, which constitutes 95 percent of all abortions carried out in Poland. The Constitutional Court, fully backed by the government, managed to push this through. This is a de facto ban on abortion, which they thought they would get away with because of the pandemic.

To the complete astonishment of the PiS and its henchmen, this move has completely blown back in their faces. A wave of anger is sweeping Poland. Large and radical demonstrations across the country have raged for seven days in a row, openly attacking the establishment and the Catholic Church for their reactionary role in society, despite the attempt to intimidate and criminalise the protests.

What’s going on far exceeds past movements both in terms of quality and quantity. This is no doubt exacerbated by the years of experience of PiS rule, which was seen as humiliating, especially to women, LGBT people, as well as workers and youth as a whole. On top of this, the PiS are overseeing a sharp recession, which is threatening the livelihoods of millions. Poland had avoided the main brunt of the 2008 crisis, but has now “caught up” with a bang.

The movement started with spontaneous protests in the main cities, but had since gained a huge amount of momentum. On Monday 26 October, 226 different towns, cities and even villages protested. On Wednesday, the police confirmed 460 demonstrations. The main cities of Warsaw, Poznań, Kraków or Łódź have seen mass turnouts, and have been effectively brought to a standstill.

Tens of thousands of people in Poland have defied Covid-19 restrictions to protest against a new high court ruling that imposes a near-total ban on abortion. https://t.co/eP11ZEiL1F pic.twitter.com/I0DfUZhjbj

The mood is starkly against anything that resembles the status quo. Statues of pope John Paul II, Ronald Reagan, and other figureheads of the Capitalist restoration, have been vandalised. Sunday masses have been interrupted, the church walls graffitied and postered by the protesters. The main slogans include: “I wish I could abort my government” and “This is war”. These scenes reveal a profound upheaval of the image of the religious, and politically quiet, Poland of the previous period.

Amazingly, quiet towns in rural areas are seeing unprecedented participation in the protests. 10,000 took part in a march in Białystok, a traditional stronghold of PiS. Tiny towns are witnessing big demonstrations; for instance Trzebnica, a small town with a population of 10,000, has seen a demonstration of 2,000. In the tiny town of Nowy Dwór Gdański, farmers have blocked all the main roads with their tractors. There is no corner of the country that is left unaffected.

It is indeed the participation of the working class, and proletarian methods of struggle – including strikes – that are giving this movement its strength. Tram drivers, bus drivers and taxi drivers have taken part in road blockages. Miners, nurses and other groups of workers represented by trade unions have expressed their support. This kind of widespread support, direct or indirect, did not take place on this scale in the original abortion law protests of 2016.

Although the role of the police has been to defend the status quo – with reports of abuse, violence and pepper spraying – morale in their ranks is visibly low. In Kraków, whole groups of police officers have put down their batons and joined the protests. This reflects the strength of the mood, and the feebleness of the bourgeois state. 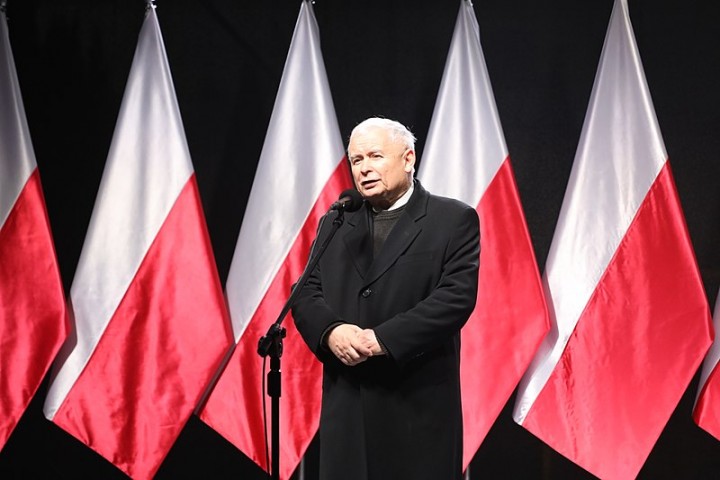 Jaroslaw Kaczynski, the machiavellian puppet-master of the PiS, has tried to rally the forces of reaction against the movement, but the balance of forces are not in their favour / Image: Kancelaria Sejmu

Jaroslaw Kaczynski, the machiavellian puppet-master of the PiS, had made a statement, in which he attempted to intimidate the movement. He correctly claimed that the attack on Polish Catholic Church is “unprecedented in Polish history”. He concluded that the aim of the movement is to “destroy Poland and end the history of the Polish nation”. He proceeded to call on his supporters to “defend the church at all costs''.

This is a direct call to the far right, represented by the Konfederacja (Confederation) party and the most backward layers of PiS supporters to attack the demonstrators. Indeed, there were multiple reports of cars ramming into protesters, and the fascists using violence to stop the protesters from getting anywhere near the churches. Konfederacja are setting up a “National Guard", which are meant to organise the “soldiers of Polish patriotism”.

But the balance of forces is not in their favour. Their actions can only add fuel to fire. 74 percent of the entire population oppose the move, and only 13 percent support it. Furthermore, 56 percent directly support the protest movement. There have been scenes in which some Legia Warsaw football fans, a traditionally reactionary group, were standing in defence of women's protests and attacking Konfederacja supporters in fist fights. This is just an example of how sharp and wide-reaching the change in mass consciousness is.

The movement already outnumbers the far right and exposes them for the feeble force that they are. But to maintain this, this power needs to be organised, with the full backing of the trade unions and leaders of the left-wing parties, into a mass independent party of the working class. Only this kind of organisation will be capable of smashing reaction wherever it rears its ugly head.

Strajk Kobiet, an organisation through which these protests have been called, demanded for the government to resign, and for a “consultative council, like in Belarus, to be called up to clean up the mess”. It calls for the council to be made up of “all pro-democratic groups”, and “experts”.

The demand seems like a step in the right direction, but it is not enough. Who are these “experts”? The same economists who oversaw the mass sell-out of the 1990s? Or liberals and academics who have no clue about fighting back against the PiS and who play no real role in this movement? These liberal elements, who are vying for control of the movement, will drive it down a blind alley.

The real experts in society are the workers, who know how to run their workplaces. In alliance with students, pensioners, unemployed and all of the oppressed, they must be the ones running any such councils, which will be nothing if they are not made up of all layers of the working class.

The government knows that time can wear out this movement. The leadership needs to move a step further, and to galvanise the anger that exists across the whole of Polish society against the PiS government and the system they represent. Strajk Kobiet have launched surveys of its supporters, and have extended the demands to include:

The anger of these protests is anger against the whole system, which offers no future for all workers and youth.

The Polish Marxists, around the organisation Czerwony Front, are defending these ideas and perspectives within the movement.

We do not need to wait for the PiS to resign for us to organise. Their game is to wait and hope the protests fizzle out. We must not allow for this. Inter-district strike committees should be called immediately in every city, town, and village – organising all workers, students, pensioners to coordinate the movement, and defend it against the National Guard, and the most reactionary Konfederacja and PiS supporters. The goal must not be to plead with the PiS, but to bring this reactionary government down and build an independent political alternative based on the mass of the Polish working class – both women and men – and the youth.