Details
In Defence of Marxism
31 January 2006

France
Share
Tweet
On January 28 and 29 a memorial meeting was held at the Institute of Political Studies at Grenoble University to pay homage to the life and works of Pierre Broué, that outstanding Marxist historian and revolutionary. Among the speakers were Alan Woods, Celia Hart and Trotsky’s grandson, Esteban Volkov. 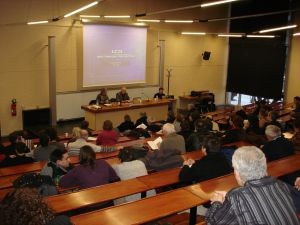 The event dedicated to the life and work of Pierre Broué which took place on 28th and 29th January, at the Institute of Political Studies at Grenoble University, in France, was a welcome opportunity to emphasise the contribution to the working class movement, of a man who was not only an outstanding Marxist historian, but also an active revolutionary.

Pierre dedicated his entire life to the cause of international socialism. Towards the end of his life, he entered into contact with Alan Woods and the International Marxist Tendency, and considered himself to be in complete agreement with the ideas of In Defence of Marxism, on all fundamental issues.

Tragically, his failing health and ultimate death prevented our common work from accomplishing the many projects, which we had jointly planned and initiated. The death of Pierre is a great loss to the international Marxist movement. His own works and his monumental achievements in relation to the translation and publication many of Trotsky’s writings will prove to be an invaluable tool in the hands of the present and future generations of revolutionaries.

This point was emphasised in the remarkable speech made to the conference by Esteban Volkov, Trotsky’s grandson, who insisted on the vital contribution of Pierre in recovering historical truth about the Russian Revolution and the struggle of the Left Opposition against the bureaucratic degeneration of the Soviet State from underneath the mountain of lies, distortion and slander heaped upon it by the Stalinist falsifiers.

Some of the speeches at the conference were of a more anecdotal character, on the part of academics and friends who had occasion to work with Pierre over the years. The political dimension of the event came to the fore in the evening session, with the speeches made by the Cuban revolutionary Celia Hart and by Alan Woods. 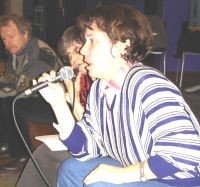 Celia emphasised the importance of defending the ideas of Marxism – and in particular of Trotsky’s “theory of permanent revolution” in relation to the present-day revolutionary events in Venezuela and Bolivia. She also pointed out the vital importance of defending the Cuban revolution – an elementary idea for Marxists that has unfortunately been forgotten by many self-styled “Trotskyist” sects in France – the fate of which is inseparably linked to the perspectives for the revolutionary movement in the rest of Latin America. “It is inconceivable, for me” she said, “to speak of the Latin American revolution without taking into account the need to defend the conquests of the Cuban Revolution”.

Then came the intervention of Alan Woods. Alan opened his speech by pointing out the validity of the ideas contained in the Communist Manifesto, which, although published in 1848, is “a remarkably accurate description of the modern world”, a fact, which demonstrates, as Alan pointed out, the superiority of Marxist methods and ideas over those of the ideologists of capitalism. 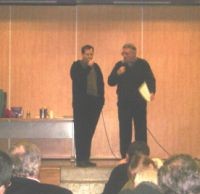 Alan went on to explain the revolutionary events underway in Venezuela, in Bolivia, and elsewhere. In relation to Pierre Broué, he said that the most fitting manner to commemorate and continue the principles and aspirations, which guided Pierre throughout his entire life, was to build a genuine Marxist leadership and a genuine Marxist international. It must be said that while this idea met with a positive response from many in the audience, it would seem that it had a disturbing effect upon some of the people present, and in particular upon some particularly confused former “trotskyists” who have subsequently embraced the bankrupt and discredited ideas of reformism. 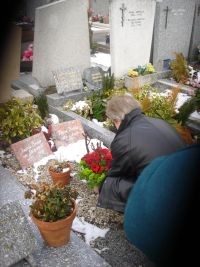 Before taking the train back to Paris, Esteban Volkov, Celia Hart and Alan Woods, together with Greg Oxley (the editor of the French Marxist journal and website La Riposte) and Jean-Pierre Juy (a longstanding friend and collaborator of Pierre in relation to the journal Le Marxisme Aujourd’hui) went to the cemetery on the outskirts of Grenoble, to pay their respects and place a bouquet of red flowers on the grave which contains his ashes, alongside the remains of his wife, Andrée Broué.