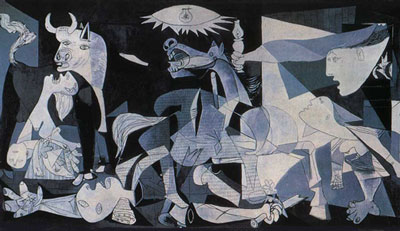 The prophetic description of anonymous warfare, the blankets of darkness and death dropped over civilian populations still resonate. To the degree we realise the truth expressed in this work, Guernica stands as possibly the greatest painting of the 20th Century.

"What do you think an artist is? An imbecile who, if he is a painter, has only eyes, if he's a musician has only ears, if he's a poet has a lyre in each chamber of his heart, or even if he's a boxer, just muscles? On the contrary, he is at the same time a political being, constantly alert to the heart-rending stirring or unpleasant events of the world, taking his own complexion from them. How would it be possible to dissociate yourself from other men; by virtue of what ivory nonchalance should you distance yourself from the life which they so abundantly bring before you? No, painting is not made to decorate apartments. It is an instrument for offensive and defensive war against the enemy." Pablo Picasso, Les Lettres Francaises, March 1945.

On April 26, 1937 General Franco commissioned from the German High Command, against Republican Spain, the aerial bombardment of the small and defenceless Basque town of Guernica. The prototype of all future bombing raids, the Junker and Heinkel bombers of the Legion Condor visited a hell on earth in the form of bombs weighing up to 1000lbs across the town of 10, 00 people. Heinkel fighters, according to press reports, machine-gunned the fleeing crowds as they sought escape into the surrounding fields.

Some two months later, seventy years ago this month, as the result of an already existing contract between himself and the Spanish Republican Government, Pablo Picasso, the most famous artist of the 20th century, was to deliver a large painting to be installed at the Spanish Pavilion at the Paris World Fair. To great controversy, Guernica was unveiled. Despite his enormous prestige the establishment rarely tell us that Picasso was a man of the left.

About six months ago I enjoyed the privilege of standing before this painting, housed now in the Reina Sofia, Madrid's Museum of Modern Art. Against my expectations and even to my surprise I found it an undoubtedly moving experience. Like many paintings in their reproduction, we become desensitised to the expression of force revealed only in the act of painting.

I was aware this work was large, but I was not prepared for its actual scale, and was made aware once again of the gulf between knowing something, and actually experiencing it.

There is no colour in this painting. Both colour and life have seemingly been drained from its surface, with only extremes of grey, and silence. But the silence shouts!

Playing upon the allegory of the bullfight, the courageous â€˜fighter of the bull' is pitted against the cruel and violent beast. But here the primitive urgings of the beast emerge as the victor. The bull, perhaps a clue for Spain itself, stands either indifferent to the scene of raging despair, or on the cusp of comprehension. The human carnage, the torn bodies, are perhaps symbolic in Picasso's own words, of â€˜a suffering humanity', engaged in acts not of their own agency, but writhing from terror in the immediate aftermath of the raid.

During its execution, Picasso wrote the following in order to combat accusations of political indifference to the plight of Spain: "The Spanish struggle is the fight of reaction against the people, against freedom. My whole life as an artist has been nothing more than a continuous struggle against reaction and the death of art. How could anybody think for a moment that I could be in agreement with reaction and death? ... In the panel on which I am working, which I shall call Guernica, and in all my recent works of art, I clearly express my abhorrence of the military caste which has sunk Spain in an ocean of pain and death."

Almost unexpectedly, this ocean of agony is contained within an interior, restrained twice, once by the painting's frame, and then also by the â€˜inside of life'. The mother on the left cradles her broken infant as she screams heavenward. Below her on the ground the horse thrown bull fighter, his sword and himself snapped and defeated. The horse, apocalyptic, terrified, punctured, its neck outstretched in an equine scream. Two women rush toward the horse and the centre, one arm outstretched overhead holding a candle illuminating the bedlam, while yet another woman collapses, arms outstretched to the sky, forlornly pleading with the absent bringers of death.

Interestingly, the electric light transformed itself at the close of the painting's execution from an eye, but still reads as such, acting as both witness, and as a commandment to look, and to see: - to act â€˜in the light of the eye'.

Picasso refused to allow the painting to be exhibited in Spain under the Franco regime, and not until 1981 did it move to Madrid from the Museum of Modern Art in New York. More than any other painting of the â€˜modern' era this work undoubtedly spoke its relevance, and its necessity, to a wide audience.

The triumph of all great art is the dialectical convergence of form becoming content, and content becoming form. Fighters for socialism are only too aware of the â€˜horror without end' that Capitalism maintains as a future.

But there is another future, one that is lit from above with both hope and with life. In this space we must have art. The prophetic description of anonymous warfare, the blankets of darkness and death dropped over civilian populations still resonate. To the degree we realise the truth expressed in this work, Guernica stands as possibly the greatest painting of the 20th Century.