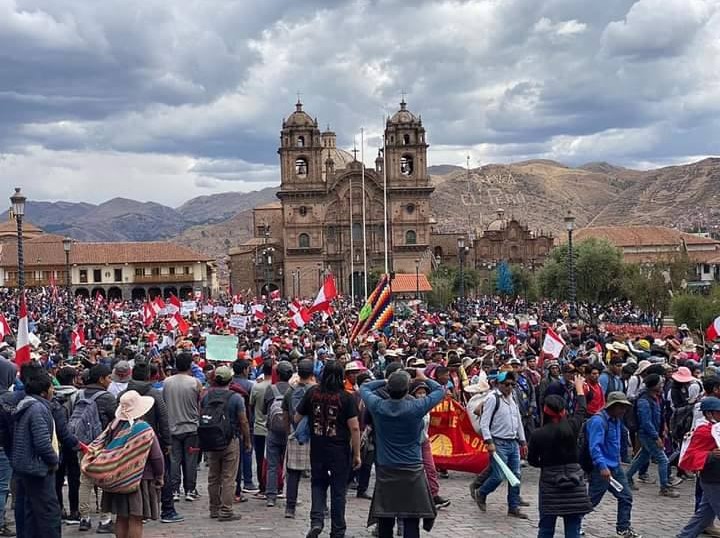 Mobilisations opposing the coup against president Pedro Castillo in Peru have put the government of the usurper Dina Boluarte on the ropes, with 14 of Peru's 24 departments affected by mass demonstrations, strikes and roadblocks.

The repression has failed to stop the movement, although 8 people have already been killed, including two minors, all but one by police gunfire.

In several provinces in the south of the Andean country, the masses have taken over airports and attacked public prosecutors' offices. Groups of demonstrators occupied the Camisea gas installations.

The growing mass movement of workers, peasants and youth is spreading rapidly throughout the country around three or four central slogans: Freedom for Castillo, Shut down Congress, New elections and a Constituent Assembly.

The dismissal and arrest of Castillo on 7 December have been the spark that has ignited a powerful movement that puts into question the whole of the established order. When workers and poor peasants say "we want a constituent assembly", they do not only mean a rewriting of the current constitution, issued under Fujimori's dictatorship, but a root-and-branch change of the whole political system.

"For how long are we going to be subjugated by the capitalists", said a community member in Pazos, Huancavelica, at one of the roadblocks of these days. The idea that is driving tens of thousands is the question: "if we elected teacher Castillo, why does the oligarchy think it has the right to remove him?” In reality, what is being put on the table is a questioning of the farce of bourgeois democracy, where all can vote, but an unelected and parasitic minority of capitalists, bankers, landowners and multinationals are the ones who really rule.

The capitalist oligarchy thinks that the people are ignorant and therefore unable to rule. They certainly never reconciled themselves to the idea of a teacher unionist with roots in the rondas campesinas (autonomous peasant patrols) as president of the country. For all of Castillo's concessions to the ruling class and retreats from his own programme, they never considered him as one of their own.

Thus, province after province is declaring a peoples’ insurgency against the vacancy (the legal formulation used for his removal) of President Castillo. Several regions have already declared an indefinite strike since 13 December, and more are joining in. The movement is spreading from the rebellious south to the north of the country. In the capital, for the moment it is the youth, led by the students of San Marcos and La Cantuta, who are leading the way in the face of police repression.

The growing strength of the mobilisations has begun to crack the coup alliance. State authorities in several southern provinces and departments have issued communiqués denouncing state repression and demanding general elections now. The National Association of Regional Governors has made a similar statement.

The usurper president herself, Dina Boluarte, who when she was illegitimately sworn in announced that she was taking office until 2026, then said there would be elections in 2024, and is now pressured by a motion in congress to be discussed on 15 December, calling for elections in 2023.

It is clear that the idea of early elections, called by the current authorities (congress and the usurper president) is an attempt by the oligarchy to find a way out of the explosive situation they themselves have unleashed.

But that is not what the masses want. When the workers, peasants and youth on the streets and squares of the country say "elections now", this slogan is linked to the other slogans, starting with the freedom of Castillo (and his reinstatement in the presidency), the closing of the Congress and a Constituent Assembly. The capitalist oligarchy wants to call elections... so that everything stays the same and the mobilised people leave the streets, squares and roads.

Today will be crucial. All the organisations in struggle, workers' unions, teachers, agrarian and peasant organisations, ronderos, students, regional defence fronts, struggle committees, unitary commandos, have called for a big national strike and demonstration in the capital Lima. Tens of thousands are already on the march from the four suyos [corners] of the country.

In panic, the defence minister on 14 December, declared a state of emergency throughout the country for 30 days, extending the measure that had already been declared in Arequipa, Ica and Andahuaylas for 60 days.

Defence Minister Alberto Otárola explained that: "The Peruvian National Police maintains control of internal order with the support of the Armed Forces... the declaration of a national state of emergency means suspension of the rights of assembly, inviolability of the home, freedom of transit, freedom of assembly and personal freedom".

It is a clear challenge to the movement. An attempt to prevent the national strike and mobilisation of 15 December by means of repression. In the three southern departments, where the army is already guarding public buildings, the state of emergency has not stopped the movement.

The bourgeois media and the political mouthpieces of the oligarchy have launched a campaign to criminalise the movement, accusing it of being controlled or manipulated by the Shining Path guerrillas. The accusation is ridiculous, and the "terruqueo" (slandering someone as a terrorist), which has been part of the arsenal of the Peruvian ruling class for years, has less and less impact on public opinion.

Unfortunately, we must point out that the recognised leaders of the left have not risen to the occasion. The former president of Castillo’s council of ministers, Guido Bellido, who abstained in the presidential vacancy vote, has come out to call for dialogue (when the police are gunning down demonstrators) and to dissociate himself from "criminal acts that delegitimise peaceful protest" and "acts of aggression and vandalism" (!!).

It is an intolerable defensive response to the attacks by the bourgeois media that target Bellido himself and other congressmen like Tello, Bermejo and Chávez, as "instigators of the protest" and accuse them without proof of "facilitating money and logistics to Movadef" (the organisation supporting the rights of Shining Path prisoners).

What Bellido should have said is that violence comes from the side of the oligarchy, the usurpers and the state apparatus they use to stay in power. To the accusations of "vandalism" and "violence" we have to answer that seven of the eight deaths in the last few days have been caused by police shooting with firearms. Who then is violent? Who are the vandals? The mobilised people have the right to defend themselves against the repression of an illegitimate government.

The leader of Perú Libre, Vladimir Cerrón, has expressed himself roughly in these terms when he declared: "The violence is caused by the rich who managed to overthrow Castillo, the poor do not go to the protests because they want to die, but because of the conditions that force them to take this path, to make their voice respected and for their victory at the ballot box to be respected, which today is being taken away from them."

Workers, youth and peasants must fight the coup!

However, Peru Libre's position has been weakened by its vote in favour of the removal of Castillo in Congress on 7 December (by six to three vote, with three abstentions).

Although Perú Libre has correctly insisted that new elections in and of themselves would not solve anything and has proposed that they be linked to a constituent referendum, Cerrón explained that he conceives the Constituent Assembly as a way of establishing a "fairer social pact" between workers and capitalists: "Only with a consensus between the ruling and dominated classes can there be social peace, and this starts with debating the new constitution in a Constituent Assembly."

Here we see the ideological confusion at the root of the position of Perú Libre, which although it describes itself as "Marxist, Leninist and Mariateguist", in reality advocates managing capitalism in a "fairer" way for workers and peasants. We must say it clearly: this is not possible, and even less so in a time of deep world capitalist crisis, and even less so in a country dominated by imperialism like Peru.

Faced with this situation it is clear that the working class, peasants and student youth can only rely on their own strength. To win, the movement must adopt an organised character, through elected and recallable delegates in every town, city, neighbourhood, faculty and peasant community, united in a great National Revolutionary Assembly of Workers and Peasants, which should take the reins of the country into its own hands and dislodge the capitalist oligarchy once and for all.

The next few hours will be decisive.

Kick them all out! The working people shall rule! Expropriate the oligarchy and the multinationals - no more poor people in a rich country!