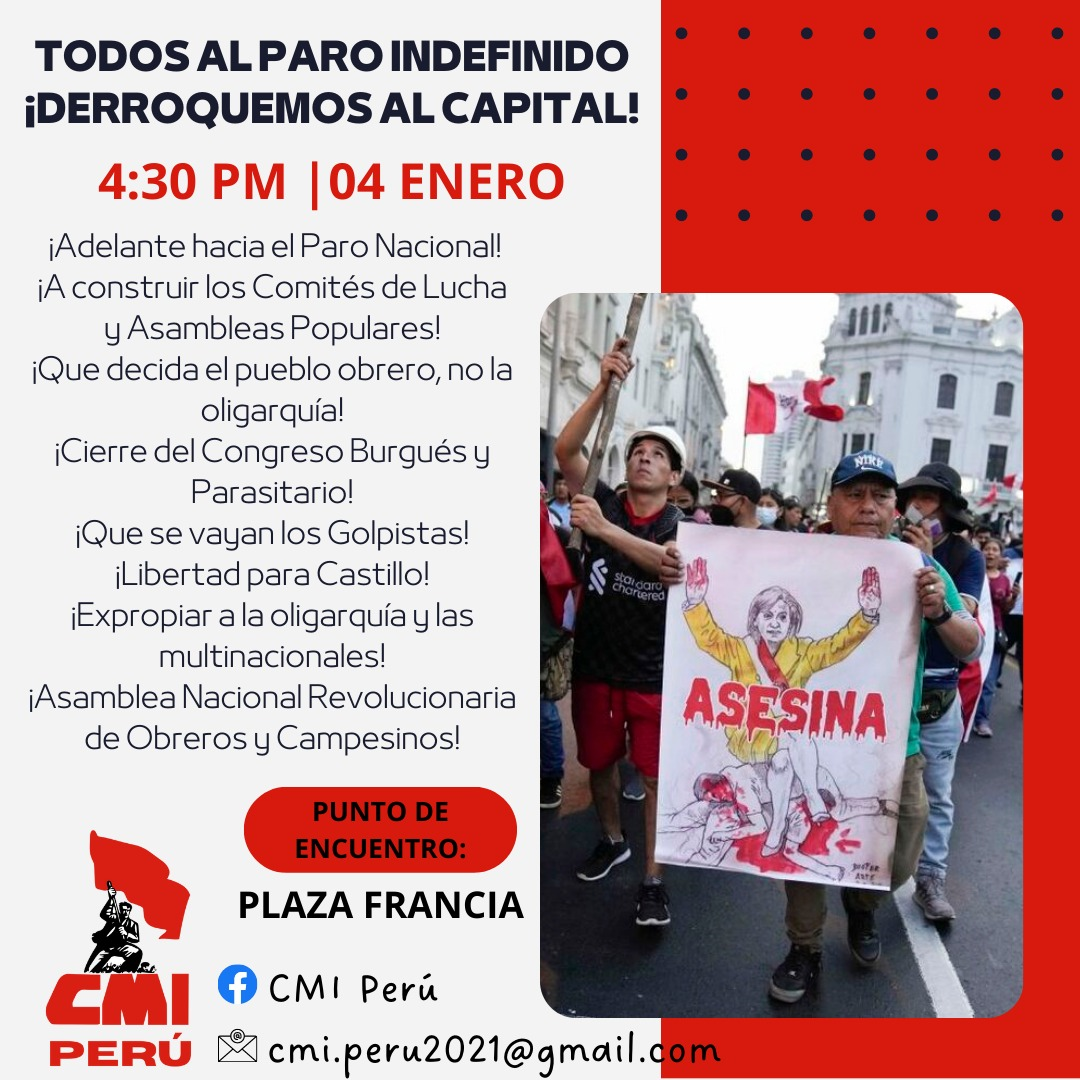 This is the text of a leaflet, issued by the comrades of the IMT in Peru on 4 January, when there was a call for an indefinite general strike in the southern regions of the country, as part of the struggle to oppose the coup against President Castillo.

Almost a month has passed since the coup against the government of Pedro Castillo. A coup orchestrated by CONFIEP [the bosses’ organisation], the bourgeois state apparatus, Fujimorism, the mining multinationals and the US embassy against a president democratically elected by the working people of Peru.

The government of Pedro Castillo represented the hopes of the oppressed to improve their living standards, but for the Peruvian bourgeoisie and imperialism, he always represented a latent threat to their economic interests, and that is why it was necessary for them to get rid of him. Finally, on 7 December, they succeeded in doing so.

Through the coup-congress, which had guaranteed that the president could not carry out his mandate, Dina Boluarte was appointed as president. In less than a month she is already responsible for the death of almost 30 Peruvians who have been vilely murdered by the National Police and the Army during the protests against the coup.

The situation in Peru today is a reflection of the fact that the capitalist system, which is rotten to the core, cannot be reformed, it must be abolished. The only way out of this crisis, which is favourable to all the oppressed of Peru, is through the organised struggle of our class.

The demands of the movement are clear: the closure of the coup-congress, the resignation and imprisonment of Dina Boluarte for murdering demonstrators, freedom for Pedro Castillo, early elections for 2023 and the convening of a Constituent Assembly. But who will be in charge of enforcing these demands? The same institutions of the bourgeois state that have provoked the coup? To leave the process of early elections and the Constituent Assembly in the hands of the bourgeois legality would be to leave our destiny in the hands of these exploiters once again. That is why, for our demands to lead to real, revolutionary change, the organised working people must take the reins of these processes in every region of Peru.

New elections in 2023, or 2024, as the coup-congress wants, while keeping intact the institutions that serve the ruling class, is the perfect trap that the bourgeoisie will use to demobilise and to put up candidates who are in tune with them, like Keiko Fujimori, or in the best of cases, fearful reformists incapable of confronting and fighting for their own limited programme. What is at stake is not new elections within the bourgeois framework, but to put on the table who rules the country: the working people, the oppressed majority; or the 17 big national and foreign economic groups that control the country's economy?

Bourgeois laws and constitutions have shown us that they are designed to protect the interests of a privileged class, so why let them redraft the constitution? As long as they have control of the state, they will be the ones to apply the law and use the state at their convenience. Only we, the exploited, know our needs well and the assembly we need must be a National Revolutionary Assembly of Workers and Peasants, composed of delegates, elected and with the right of recall, from the factories and workplaces, the peasant communities, among the university and working-class youth; an assembly freed from the interests of the exploiters, so that we are the ones who decide the political and economic course that Peru will take.

That is why we of the International Marxist Tendency - Peru join the call for an indefinite strike, the call for the formation of United Struggle Committees and the March of the Four Suyos. We call on all organisations in all regions of Peru to join this call, to unite all the forces of our class in this battle for the dignity and liberation of our people.

The March of the Four Suyos, in 2000, was able to overthrow the Fujimori regime; now we have the historic opportunity to defeat capitalism, in order to no longer continue under a regime of exploitation and barbarism. With all the strength of the working class, the peasants, the women, the students and all the oppressed of Peru, we can bring down the bourgeois regime. Let us expropriate the big economic and transnational groups that control the wealth of our country. Let us put the wealth created by our work and our resources at the service and disposal of the majority.

This is a historic moment, where the conditions for transforming our reality are at hand, and the only way for the oppressed of Peru to triumph will be by organising our ranks, trusting in our strength and leading the movement towards the seizure of power.

Not a step back, comrades! Forward to the National Strike!

Let the working people decide, not the oligarchy!

Close down the bourgeois and parasitic congress!

Kick the coup plotters out!

Expropriate the oligarchy and the multinationals!

For a Revolutionary National Assembly of Workers and Peasants!