Brazil
Share
Tweet
The second day of the Pan American Conference provided a real taste of the most advanced workers’ struggles in Brazil and other countries in Latin America. Peasant leaders, Bolivian miners’ leaders, factory leaders, all spoke about the terrible conditions and expressed their determination to struggle. The idea of factory occupations as an answer to the bosses’ closing of factories dominated the discussion, as did a deep-seated desire to struggle for international socialism. 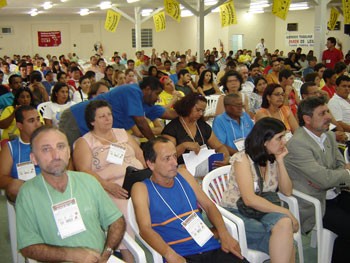 The Second Day of the Conference opened with the presentation of a whole series of leading activists in the Brazilian Labour Movement, trade union leaders, representatives of the MST (Landless peasants movement) and others, who made up the panel of speakers.

The representative of the railway workers denounced privatisation and pointed out that this had led to the loss of 55,000 jobs in Brazil. "Those who produce get no reward," he said, "and those who do no work get the profits". He paid warm tribute to the workers of Cipla and other occupied factories: "They are an inspiration to all of us who are fighting for the expropriation of the railways under workers' control."

A young female worker, Paula Vilela, spoke on behalf of the workers of the occupied factory Plascalp Produtos Cirurgicos, in the province of Bahia. She spoke of the incredibly bad conditions of the workers under private management: poor health and hygiene, injuries caused by repetitive strain, the arrogance of the bosses who did not pay wages or social security contributions for months on end. Finally, the patience of the workers was exhausted and the workforce of 1,100, 80 percent of them women, decided to take action.

"Most of us are the breadwinners and our families were going hungry because the owners of the plant owed us three million Reals in unpaid wages. They did not recognize this debt. We went to court but with no result. Finally we decided to take over the plant." (applause and shouts of "Unity! Unity! The workers united will never be defeated!")

Antonio, a workers' leader of the shoemakers in São Paolo told a similar story: "In September the factory closed its doors. They paid the workers nothing. We were left with empty hands. That is why I have come here - to learn from the experience of workers who have occupied their factories. We are only fighting for work and a dignified and just life." The same point was made by the representative of the unemployed workers' movement, the MTD, who concluded that, in order to fight unemployment and factory closures, "we must support the occupation of factories all over Brazil."

A very effective speech was made by João Francisco Juruna, leader of the metal workers in the Campinas region, near São Paolo:

"We workers understand that the only way to reduce hours is by revolutionary means. Under capitalism technological advances mean that a machine can do the same work with two workers that was previously done by ten. That means growing unemployment and the only way to solve the problem is by reducing the hours of work.

"Brazil also faces another big problem: agrarian reform. Many peasants have been forced to move to the towns and cities to earn a crust of bread. But this solves nothing. We must organize a big movement of all workers, from all different trades and factories, to force our government to carry out an agrarian reform and a general reduction of working hours. To do this, we need the CUT, to which our union is affiliated.

"The other issue is the occupation of factories. We must do everything in our power to supply them with what they need so that they can continue to produce. We cannot accept any attack on the working class by the government. The government must do what the workers need. We must reject all laws that restrict workers' rights.

"It is a new experience for me to be here. It has been very important and I intend to carry the message of this conference to the workers of Campina and São Paolo, and to take up the banner of struggle." (applause)

Unity of peasants and workers

The conference gave a particularly warm reception to comrade Ravanelo of the MST (landless peasants movement), who congratulated the workers of Cipla on their decision to introduce the 30 hours week:

"Comrades, we have not come here just to make speeches, but to establish unity in action. The fight for the land has convinced us that we cannot defeat the big landowners (latifundistas) on our own. The globalisation of the capitalist system has changed the situation. The class of landlords and capitalists is mixed up. The latifundistas are the enemies of the workers and the bankers and capitalists are the enemies of the peasants. They are the common enemy. We must unite the struggle on the land and in the factories.

"Although we have had Lula for four years - and he came from the working people and was part of its struggle - our basic problems have not been solved. There are some on the Left who say we should not put pressure on the President. But the bourgeois are putting pressure on him all the time! The working class and the peasantry must compel Lula to carry out an agrarian reform and nationalise the factories. (cheers and applause)

"In the end, it all depends on us: our determination and solidarity. We must learn to set aside petty differences and unite in action against our common enemies: Capital and the bourgeois state. Therefore, comrades, I urge you to unite all over Latin America and all over the world. Once the working class and peasantry are united, nothing can stop us. Victory will be ours!"

Amidst enthusiastic applause, comrade Ravanelo made a presentation to the occupied factories movement of a banner of the MST, which was hung at the front of the hall.

Announcing the arrival of new delegations from Uruguay and Venezuela, Serge Goulart said: "Yesterday a comrade from an occupied factory said to me: ‘Before I came here I felt we were isolated. But now I feel we are not alone, but we are fighting together with the rest of the working class.'" These words really express the tremendous feeling of unity and strength that has characterised this conference from first to last.

Continuing his speech, comrade Goulart paid tribute to the heroic Bolivian working class and read out the names of the five miners who were killed recently in Huanuni, in bloody clashes with counterrevolutionaries. After each name was read out, the conference shouted "Present!"

He then went on to deal with the domestic political situation in Brazil, and sharply condemned the action of Lula in forming a coalition with bourgeois politicians:

"The only coalition Lula ought to form is with the forces represented in this hall today: the working class, the peasantry and the popular forces (applause and cheers). But if he forms a coalition with the bourgeois, that is not the way to represent the interests of the people. The bourgeoisie is only interested in making profits: for them, the people are only just so many statistics."

Serge went on to refer to the revolutionary developments in Mexico - the struggle over the election results and the uprising in Oaxaca. Referring to the Popular Assembly of the People of Oaxaca, he said: "Do you know what this Assembly was? It was the birth of the Soviets in Latin America. In the Russian Revolutions it was the Soviets, the democratic organs of power of the workers and peasants that expropriated the land and factories. That conquest was later betrayed by Stalin, but it was the most democratic expression of workers power."

Serge concluded: "We must explain the real meaning of the movement to every trade union branch, every worker, to every factory and village. When there is sufficient pressure from below, the trade union bureaucracy soon becomes ‘convinced' that they must support the movement, they even become very ‘left wing' and ‘communistic' (laughter). But the real answer is always below - in the rank and file. Only by mobilizing from below can we succeed." (applause)

After this speech, the Conference broke up into commissions dealing with 1) housing 2) public services 3) agrarian reform and 4) factory occupations.

The final session opened on Sunday 10th December, when a series of messages were read out, although there was no time to read all of them. There was a warm welcome for the message from the United States. Unfortunately, the US delegation was prevented from attending at the last minute by technical difficulties. But their letter expressed firm support for the Conference and the aims of the occupied factories movement and expressed their commitment to solidarity.

Other messages were received from as far away as Turkey (miners, health workers and students) and from Mario Bustamente, leader of the COB (Bolivian trade union confederation), who, again, was prevented from attending for technical reasons. There were many messages of support from workers and peasants' organizations all over Brazil, as well as a message from Sanitarios Maracay (Venezuela) and the Bolivian Miners' Union (also represented at the meeting by four leading members).

The delegates then heard the report back of the four commissions held the day before. A final declaration was read out and voted unanimously by the Conference. The text is only available in Portuguese, but will be translated in the next week and published for maximum distribution.

Roberto Chavez, general secretary of the Bolivian Miners' Union spoke at the end, reiterating the firm determination of the Bolivian miners to fight for nationalisation and workers' control. He then presented Serge Goulart with a Bolivian miner's helmet, an act of considerable symbolic value, and one that is not done very often. It shows the enormous importance the Bolivian miners give to the occupied factories movement and the impact that this Conference undoubtedly had on them.

In closing the Conference, Serge Goulart, complete with miner's helmet, summed up the three days proceedings. Among other points, he stressed the absolute need for free debate and democracy in the workers' movement:

"Our movement needs free debate and democracy as the human body needs oxygen," he said. "Almost 700 delegates attended this Conference and everyone had their say. We cannot allow discussion to be suffocated or our positions to be distorted. The working class must freely decide what it wants and its decisions must be sovereign. In this Conference we have come together to exchange views and experiences and to clarify our orientation in the struggle.

"We have big struggles ahead," he said, and warned that it would not be easy. "I have just heard that the big employers in Joinville have met to discuss how to react to the decision we took here on Friday to reduce the working week to 30 hours. We must be prepared. We must work out a strategy of struggle. We must set up an international committee of struggle and begin to organise seriously.

"If we are organised, we can win. We must bury the rotten profits system once and for all. But if we are to succeed in this, we must build on every small conflict, conquering one small victory at a time. The first priority is the struggle to defend jobs. 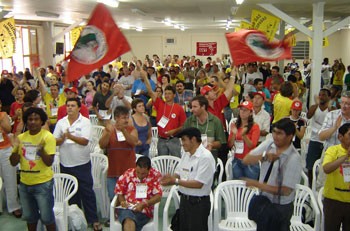 If the capitalists close factories, we will open them. The factories to the workers! The land to the peasants! Long live the struggle of the working class! Long live proletarian internationalism! Long live socialism!"

This inspiring speech of Serge Goulart was met with a spontaneous standing ovation. The mood in the hall was of tremendous elation, tempered by a solid determination to carry the fight to victory.