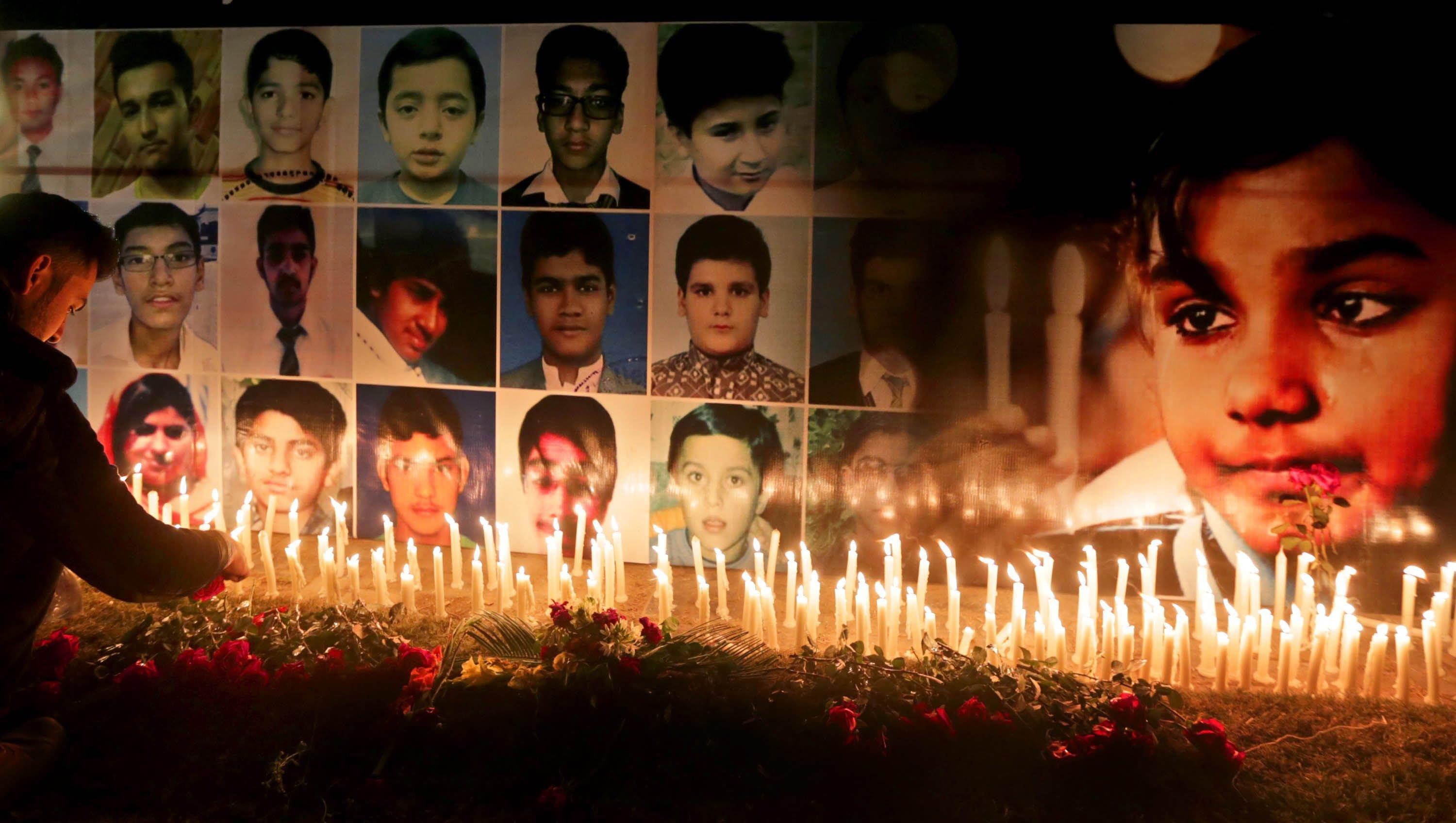 As terrorists struck another educational institution, the attack has stunned even a society where terrorism is not an extraordinary happening. Wednesday`s attack on Bacha Khan University`s Charsadda Campus in which 21 mainly students were killed and more than fifty injured, has raised the two-day death toll to more than 30.

Just when the media, the ruling elite and the state were trying to claim that Pakistan had “turned the corner” by nearly overcoming the behemoth of terrorism, terror is raising its ugly head again in a vicious vengeance. In the first 20 days of 2016 there have been more than 60 deaths in terrorist attacks across the country.

All this has raised apprehensions and the feeling of insecurity among ordinary souls that more is to come, with more horrific results. Such incidents in the last analysis add insult upon injury for the oppressed masses that are already facing the brunt of the economic and social crisis of this obsolete and cruel capitalist system.

Although the frequency of the attacks subsided in 2015, the menace of terror remains very much there and the attack on the university at Charsadda shows that their networks and threat are far from being eradicated, contrary to what is being proclaimed by the army’s spokesman. There have been intelligence-based operations, thousands of them, and scores of militants have been arrested or eliminated. The military operation had been launched two years ago but the notion that it will eliminate terrorism has proved to be futile. The grim reality is that it isn`t over.

Driven from their sanctuaries in the tribal borderlands, Pakistani militants have found sanctuaries close to the border in Afghanistan, where they continue to train and send death squads to Pakistan to sow mayhem. Khalifa Omar Mansoor, the former activist of the banned Lashkar-i-Jhangvi who heads his own group within the outlawed Tehreek-i-Taliban Pakistan, and who claimed responsibility for the Bacha Khan University Campus attack, operates from Naziyan district of Afghanistan`s eastern Nangrahar province. All phone calls were traced to Afghanistan. This commander of the terror outfit, who also goes by his alias Omar Naray, previously masterminded and executed other major attacks in and around Peshawar, including the December 2014 attack on the Army Public School and the assault on the PAF airbase in Badabher in September last year. The anti Shia sectarian attack on Imamia Mosque in Peshawar’s middle class district in February 2015 that left 20 worshippers dead was also his doing.

However, nothing tangible took place nor could have been achieved. An intra-Afghan peace dialogue began and collapsed. With the deadline of the NATO forces withdrawal, the Afghan Taliban went on a new offensive in Afghanistan, capturing provincial capitals and district headquarters amid suicide bombings in Kabul and elsewhere. President Ghani waited but then lost his nerve, openly accusing Pakistan of waging an undeclared war against his country. Realising that he could not possibly salvage the situation without Pakistan`s help, he, reluctantly, reached out to Islamabad again. A video conference between the beleaguered Afghan president and Gen Raheel Sharif helped kick-start the process again, resulting in the resignation of the Pakistani security establishment`s long standing bête noire, the intelligence chief of Afghanistan`s National Directorate of Security, Rehmatullah Nabeel. President Ghani visited Islamabad to attend the Heart of Asia conference in December and offered a new, verifiable mechanism of a “military-to-military” and “intelligence-to-intelligence” relationship. Pakistan renewed an offer to “facilitate” the return of “reconcilable” Afghan Taliban to the negotiating table.

A hotline between the directors general of military operations has been set up. An understanding on “intelligence sharing and cooperation” between the Afghan NDS and the ISI was also reached. But then suddenly renewed terrorist attacks on the diplomatic missions of India and Pakistan, two of the most hostile foreign adversaries in Afghanistan’s multifaceted proxy war took place. On Jan 4, the Indian consulate in the Afghanistan city of Mazar-i-Sharif was struck by the Afghan Taliban. On Jan 13, a suicide bomber attacked the Pakistani consulate in Jalalabad. The militant Islamic State group (Khorasan) accepted responsibility. In the same period, the Pathankot incident took place in India that was blamed by its media and regime on the Jaish a Mohammad, a Pakistan based terrorist organisation supposedly banned by the government. Then there was a sudden surge in terrorist attacks in Baluchistan and Peshawar. Pakistan’s military agencies are adamant that there is an undeniable link between these incidents.

There appears to be a tit-for-tat doctrine at work. Afghanistan’s NDS under Mr Nabeel masterminded this, the “if you can do this to us, we can do this to you” doctrine, and executed it in a masterly manner, the reverse of what it believed or still believed Pakistan’s establishment were doing to them. The example of Latif Mahsud former Tehrik Taliban Pakistan’s chief Hakeemullah’s trusted lieutenant is a case in point. The Americans captured him in October 2013 while being escorted by an NDS convoy for a meeting in Kabul. That game may not be over.

Once again as the Charsadda terrorists phone calls were traced back to Afghanistan, Pakistan’s military supremo, Gen. Sharif contacted and sought help from the Afghanistan regime to access and eliminate the masterminds and perpetrators of this heinous atrocity. Is this desperation or naivety? The reality is that the beleaguered Afghan President and his regime has hardly any control of the regions where the sanctuaries of these terrorist outfits are to be found.

The Afghan state is a poorly grafted tool of the imperialist invaders that has hardly much writ in large swathes of the country. Democracy under the shadows of NATO bayonets is a cynical farce. If the Pakistani state agencies could bring Afghan Taliban to the negotiating table, then sections of the Afghan regime have also links with the Pakistani Taliban that are wreaking havoc here. The hostility of Afghan state factions towards Pakistan is ubiquitous. There are also divisions within the state elites. Sections of the Pakistani state bring in India as the perpetrator, while Gen. Sharif and the Nawaz government have not ventured into that accusation. With the complexity of the quagmire in Afghanistan none of the possibilities can be ruled out. But such divergence of views amongst the top brass shows the strains in the edifice and the toll that this war of attrition is taking on the state.

Now most analysts in Pakistan are parroting an old truth that was for the first time publically confessed by Hilary Clinton when she was Secretary of State, that these Islamist terrorists were of their own making. The Pakistani state agencies were used as a tool to manufacture this vile terrorist network that was used to unleash the so-called dollar Jihad in 1978 to overthrow the revolutionary government in Afghanistan. The financial infrastructure based on drugs and heinous crimes was set up by the imperialists. That has metamorphosed into the main source of terrorist funding and now runs into billions of dollars. What were being used as proxies by the imperialists and the Pakistani and Saudi states for their own interests in the region have expanded and splintered, mainly over the share in the plunder and black money, into even more virulent vigilantes. They are now there in the terrorist market to hire and buy at risk of no guarantees by various regional and international imperialists who need proxies to plunder Afghanistan and Pakistan on both sides of the Durand line. The more vicious and bestial their acts of terrorism are, the more marketing advertisement these groups get with the increase in their renting costs and greater profits for their bosses. The adoption of the ISIL brand name by several of the groups in this region is more of a marketing ambition bon the part of their warlords than any real recruitment or organisational structuring by the pan-Islamic Daesh.

With a history of almost four decades of their association and collusion with the official bourgeois states of these countries they and their terrorism-based capital have infiltrated the structures and sections of these states. The veneer of this collusion is often called the ideology of political Islam. With societies in socio-economic decay and the masses in utter deprivation and misery they seem to provide some employment to the millions of youth suffering from chronic unemployment and prospects of a bleak future. The collapse of the Left and the betrayals of the left populist leaders have further added to this apathy and demoralisation of the masses. These Islamic vigilante proxies set up by the imperialists and the regional states have now ended up as Frankenstein’s monsters for them. Not only have they eroded the discipline and structures of the states, but also they are now posing a threat with their belligerent and bestial intrusion in states and societies. Like a black spectre of evil they have begun to haunt their mentors who created them to perpetuate acts against their adversaries and enhance their interests of greed and hegemony.

Now terrorism has become a worldwide phenomenon. From the Middle East to south Asia and Africa it is brutally ravaging societies. The imperialist military interventions and economic plunder have perpetrated this process. In the last analysis these Frankenstein’s monsters are the products of the manoeuvres of the states that substituted them for operations they conducted covertly for the lust of their bosses and ruling classes. Now they have to face the retribution of history. The failures of these states are also due to economic decline and the rapidly intensifying social turbulence where the states have become incapacitated and are losing their grip and writ on societies. But above all the crisis of the capitalist system is so acute that it exhibits flagrantly its historical obsoleteness and economic bankruptcy. Its rotting societies and the venomous froth of this filth in the form of terror and violence come to the fore in such periods of mild reaction and social stagnation. Terrorism can neither be eliminated through negotiated settlement with such inhuman creatures nor can it be crushed by the states that created and bred them. It is only through the revolutionary upheavals of the youth and the toilers that these forces of black reaction can be swept away. This objective situation and the epoch will not last long. We have seen movements of the oppressed masses in the recent years. New revolts will erupt sooner rather than later. This system that breeds such evils, in Lenin’s words, is a “horror without end”. Only through the revolutionary overthrow of this rotten capitalism can humanity get rid of this violent terror and socio-economic misery inflicted upon society for generations.