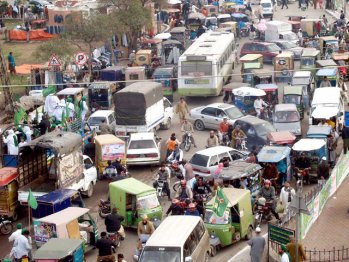 In yet another recent tragedy in a vicious cycle of constant calamities afflicting society, at least 60 people were killed, including 21 women and 19 children below the age of 14, and numerous injured following a collision between a passenger coach and a truck near Theri Bypass in Sindh's Khairpur district. A mere accident or part of the general decay of Pakistani society?

Only a week apart, a similar number of people were slaughtered in the Wahgah suicide bombing. The grotesque lynching of a Christian couple, who were later burnt to ashes in the same brick kiln where they worked as bonded labourers was next.

These horrors depict an endless saga of mayhem, disasters and brutalities in today’s Pakistan. It is a measure of how society has become so accustomed to violence and tragedy that it takes exceptionally cruel and monumental devastation of mammoth proportions to get media attention.

Hardly a day passes when there is no major blast, acts of state repression, man-made “natural” disasters and countless deaths from curable diseases. Deaths in Thar from poverty and hunger lay bare the odious nature of this rotten capitalism. The ruling elite cynically pause for deceitful rituals of “condemnation” of these incidents and then rushes back to its normal practice of extortion and plunder. Often they callously abuse these tragedies to divert mass attention from the issues and crises that could instigate mass revolts. On top of this, the murderous traffic that is choking the roads is also one of the chief causes of deaths in the country.

The number of deaths every year attributable to road accidents is almost thrice that of terrorism-related fatalities. This is due to the appalling conditions of road infrastructure, badly maintained vehicles and reckless driving. Bombings and target killings may have much of the country worried, but ordinary people are perpetually exposed and their lives and physical wellbeing are threatened constantly in this orgy of disastrous traffic. In fact, there are too many cars, motorcycles, heavy vehicles, with too few roads and parking lots. This is the result of the failure and abdication of the state in fulfilling the most basic responsibility for developing and maintaining transport infrastructure and providing road safety.

The social alienation and fear of “others” arising from the social, cultural and morale crisis of this system makes people crave “private” transport, which in turn chokes cities and towns, with high carbon footprints, asphyxiating pollution and increasing isolationism, further atomising society. The only people who benefit from this are the banks, transport and petroleum companies who amass enormous profits exploiting this alienation and fear that poisons social relations. The regimes propel credit financing to exhibit fictitious growth rates. The bad tempers, reckless driving and the mad rush on the highways are the by-products of the economic pressures, stresses and exacerbating worries.

The Global Status Report on Road Safety 2013 published by the World Health Organisation (WHO) declared road accidents in Pakistan a leading cause of death for young people aged 15 to 29. In 2010 the National Highway and Motorway Police (NHMP) and Rescue 1122 put the annual death toll due to road accidents at around 12,000. Meanwhile, according to the South Asia Terrorism Portal, 7,435 people were killed as a result of bombings and terrorist attacks the same year. A senior NHMP officer told the press, “Over 50,000 lives have been lost due to terrorism, in the last 10 years. However, in the same period, the number of deaths due to road accidents exceeded 130,000”.

The WHO report stated that the government and other concerned authorities have set no fatality reduction target, nor are any tangible efforts being made to make roads safer, due to the lack of investment and maintenance of road infrastructure. The report also acknowledges a lack of well-trained trauma nurses and access to emergency medical transportation and care. The fatalities reported from road accidents indicated that 41 per cent were pedestrians, four per cent drivers, and 39 per cent passengers, while the rest were grouped under others.

However, at the same time, a number of much-hyped metro-bus projects are being flaunted. These are serving one or two routes in Islamabad and Lahore, while millions of citizens plying on hundreds of other routes have to bear torturous transportation, suffering physical and psychological stress and exhaustion in the process.

With the public sector hospitals and health facilities either being absent or in shambles, private sector clinics and hospitals are mushrooming with extortionate fees, resulting in most of the injured breathing their last sighs on the footpaths and corridors of these clinics. Their families have no monetary resources to save the lives of their near and dear ones.

The WHO report elaborates: “Developing countries are suffering a loss of $65billion every year due to road accidents. Four major reasons for accidents are faulty engineering, inappropriately designed roads, use of inferior road construction material, loss of control while taking sharp turns and the despicable conditions of so many vehicles plying on these roads. Almost eighty per cent of drivers causing accidents are unskilled.”

The primitive cultural attitudes poisoned by prejudices from race to kin also promote violent traffic. Everyone seems to be in a mad rush to reach their destination fast and immediately, even at the cost of bending the rules trying to cut through the lanes and push everyone else aside.

Up until the late 1970s the railways were the safest and the quickest mode of transport in Pakistan. Since then there has been a huge shift towards road transportation, while the public sector road system has been almost abolished. The railways are in such a crumbling state that the “national” rulers, rather than expanding, have uprooted and auctioned off thousands of miles of railway track, built during the British Raj, to their capitalist cronies. Investment in road transport is relatively cheap with prospects of immediate profits. The road infrastructure is a source of major corruption for the ruling elite, their contractors, in-betweens, the bureaucracy and even the military construction firms having now become the largest road contractors. This tendency in transport once again proves the fact that every project or facility in the capitalist system is profit-orientated, not intended to facilitate the lives of the people.

An advanced, efficient, comfortable, cheap and fast public transport system would cut down private vehicles plying on the roads. Hydrocarbon consumption, road congestion and murderous traffic accidents would be thus drastically reduced, making society cleaner, healthier and without stress. But to make massive investments in railways and other such transportation projects is not profitable in an impoverished society like Pakistan. Without transforming the capitalist economic foundations of society, even a decent transport system cannot be provided. Healthcare, education, welfare, sewage, safe drinking water, electricity and other collective needs of society are declining rapidly. Without the abolition of the profit system, the decline afflicting Pakistan cannot be arrested. With this spiralling socioeconomic devastation, this conflagration can only plunge society into the abyss of barbarity. Nothing less than a socialist revolution can avert the Armageddon human civilisation is fated to experience under capitalism.