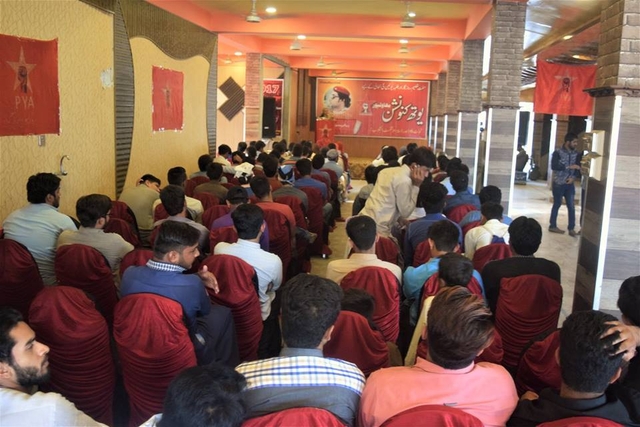 The Progressive Youth Alliance is organizing students across Pakistan, to keep alive the struggle of Mashal Khan and fight for the basic rights of students.

Since the brutal killing of Mashal Khan, many protests, public meetings, and  demonstrations have been organized across the country to discuss the problems faced by students and to organize them around one platform. The PYA has also published many leaflets and posters to spread the message. A revolutionary song was also composed and performed, which got a huge response from the youth. On 21 May a huge public meeting is being held in the hometown of Mashal Khan in which students from across the country are participating in big numbers. A delegation from PYA will also be present at this meeting with a stall of Marxist literature. State authorities are trying to disrupt this meeting with security threats, along with sending MPs from all kinds of political parties, including those who were involved in the brutal killing of Mashal Khan, and other state officials shedding crocodile tears over the death of Mashal Khan. But despite all their tactics, this meeting will send a message of hope among the students to come out for their   rights amidst all threats of terrorism.

On 16 May a convention was organized by Progressive Youth Alliance in Bahawalpur City at Darbar Mehal Hall near Islamia University. This is the third city convention of PYA in three months. The Youth Convention of Multan was held in February, while in Lahore it was held in March. 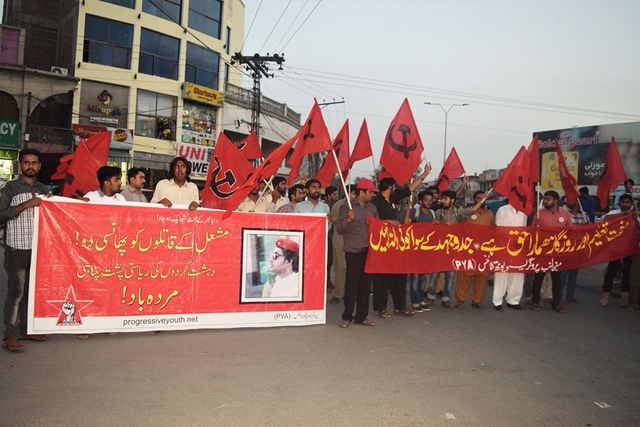 This convention was dedicated to Mashal Khan, a student of AWK University Mardan, who was lynched by Islamic fundamentalists with the complete support of Pakistani State on 13 April. Like other cities across the country, state authorities tried their best to sabotage this activity by denying the students the right to hold their convention at the Press Club. But the morale of the youth was high, and they raised funds to organize this activity in a private hall. State authorities continue to harass and intimidate young revolutionaries and left-wing activists, while fundamentalists and terrorists are free to roam and carry out their activities and hold public meetings.

Akhram Asadi conducted the stage at this occasion. First speaker of the convention was Ishfaq Gujjar from Islamia University. He outlined the problems faced by students and gave an introduction to the program of PYA. After that other speakers came on stage and expressed their views, including Aroosa Khan from BBT department of Islamia University; Asif LAshari from D.G. Khan; Mairaj Hashmi from Computer Science Department of Islamia University; Sajid Channar, a worker from Gulistan Textile Mills; Faiz Aneeb from GC Bahawalpur, and Rawal Asad from Emerson College.

Speakers condemned the killing of Mashal Khan under the supervision of state authorities and explained the difficult conditions faced by students due to astronomical fees and rising unemployment. They said that Mashal Khan was also raising his voice against this injustice, for which he was killed. They said that the Pakistani state is sponsoring all these terrorists and gives them all kind of logistical and financial support. They also condemned the ban on student unions in the country, and demanded that this ban should be lifted immediately. They said that security forces deployed in educational institutions are used to harass the students and to prevent any kind of gathering of students. They said that students will have to take security of these institutions into their own hands and will have to organize themselves to fight terrorism.

They said that terrorist organizations are free to hold meetings inside campuses, while progressive students have to face threats when they raise their voice over genuine issues. These terrorist organizations are supported by university administrations to disrupt any kind of student movement through threats and killings. Students now will have to fight against this oppression themselves; they cannot rely on any political party.

Speakers also condemned the loot and plunder of private educational institutions and said that this ruling class has made education one of the most profitable business in the country. Many public sector institutions are being privatized, which is taking the right of education away from the working class.  Already, the literacy rate in Pakistan is among the lowest in the world, and with these policies only a tiny population of rich will remain literate while the majority of the population will become illiterate. They also spoke about the menace of unemployment and how millions of unemployed youth need to organize for their right of employment.

Revolutionary poetry, songs, and a stage play were also performed during the convention, enthralling the audience. A band named Distortion, consisting of students from Islamia University, also performed at the occasion.

At the end an executive body of PYA for Bahawalpur City was elected. The office bearers include Noman Qadir as President, Aroosa Khan as Vice President, Khalid as General Secretary, Faiz Aneeb as Joint Secretary, Hunza Gul as Women Secretary, Jawad Mansoor as Finance Secretary, Ishfaq Gujjar as Information Secretary, Ghulam Mustafa as Cultural Secretary, and Hamza Mushtaq as study circle in charge.

Comrade Zain ul Abideen came up to give closing remarks. He said that PYA is organizing revolutionary youth across the country and that this convention shows that we are moving forward. He said that PYA activists are present in all major universities of the country and are playing a key role in organizing students everywhere. He said that today, the capitalist system is rotten and decaying, and cannot give any relief to the working class and youth. Everywhere in the world students are coming against this system in huge numbers. But the only out is a socialist revolution. We should move forward on this path, linking ourselves with the working class. Our aim is to destroy this capitalist system and establish socialism in Pakistan.

After the convention a rally was held condemning the brutal murder of Mashal Khan and for free education, employment, and the restoration of student unions. Morale of all the participants was very high, and the whole city resounded with the slogans of “Inqlab! Inqlab! . . . Socialist Inqlab!”

Speakers warned the government that if the murderers of Mashal Khan were not punished, then students across the country would come out in protests.  Rehmat Khan emphasised the need to unite progressive students against Islamic fundamentalists.

Afghan Yar and Attaullah spoke about the decadence of student organisations affiliated with various political parties. They said that some of these organisations were progressive in the past, but now they are rotten to the core. Many members of Peoples’ Student Federation, student wing of PPP, wanted to participate in this meeting, but leadership strictly prohibited them and threatened to expel them if they came here. This shows the position of this leadership on the issue of Mashal Khan.

Paras Jan summed up the meeting and said that today, only youth has come on stage and discussed their point of view. This is the stage for a new generation for whom Mashal Khan is a hero. Old professors and so-called leftists have nothing to offer to youth; rather, they sow confusion and demoralisation among the youth. This youth is the hope of future, while they are relics of the past. Paras also appreciated the proposal by Rehmat Khan, but also asked him to consider his own party affiliation, which is a right-wing party ruling Pushtoonkhwa in alliance with Islamic fundamentalists. His party leaders have helped the escape of one of Mashal Khan’s murderers to Thailand. He also said that all parties are parties of status quo, including PPP. Youth will now have to come out on the streets to fight against the policy of privatisation of educational institutions and other basic issues. At the end he recited his revolutionary poem, I am also Mashal, to close the meeting.

PYA and the Baloch Students Organization (Pajjar) commemorated the 39th anniversary of the Afghan Saur Revolution at Zareef Shaheed Auditorium of Science College Quetta on 27 April. This anniversary was dedicated to the memory of Mashal Khan. The last meeting in this hall to commemorate the Saur Revolution was held twenty-two years ago. More than 120 students and political activists participated in the meeting. Paras Jan presided over the meeting, while Karim Parhar conducted the stage. 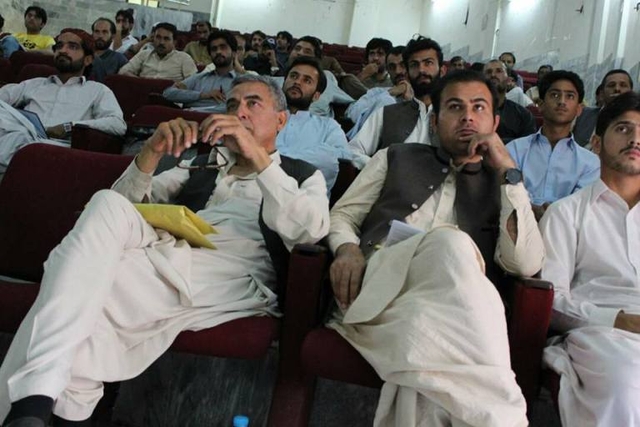 Razzaq Ghurzang opened the discussion and explained in detail the events of the Saur Revolution and the impact it had on the lives of the peoples of Afghanistan. He also explained how this revolution brought millions out of poverty through the distribution of land among peasants, free education and health, a ban on the sale of women and the granting of other basic rights for them, complete abolition of interest, and other achievements.

Others who addressed the meeting were Ibrahim Kasi, Aman Bazai, and Bismillah Khan Kakar. Changez Baloch from BSO also spoke at the occasion and presented his point of view about this revolution. Speakers also explained the impact of this revolution on the whole region, especially Pakistan.

Paras Jan summed up the discussion. He paid tribute to the struggle of Mashal Khan and said that his blood has given life to a new student movement in Pakistan. He then explained the political and economic situation around the globe. He also said that we should recognize the profound changes happening across the world and should recognize in which epoch we are living. He also said that the Saur Revolution was a huge leap for the people of Afghanistan, who were living their lives in primitive circumstances. Today we need another revolution, not only in Afghanistan but in the whole region, but we should move forward for this while learning mistakes of the past. He said that the experiences of the 1917 Bolshevik Revolution in Russia provide us the methods and tactics with which we can prepare for revolutionary transformation of this region and abolish all artificial borders dividing people.

A meeting was organized by PYA at Chakdara Press Club to commemorate the Saur Revolution on 30 April. Students from Peshawar University and Malakand University participated in this meeting along with others.  This meeting was dedicated to Mashal Khan, who was a student at University in Mardan. 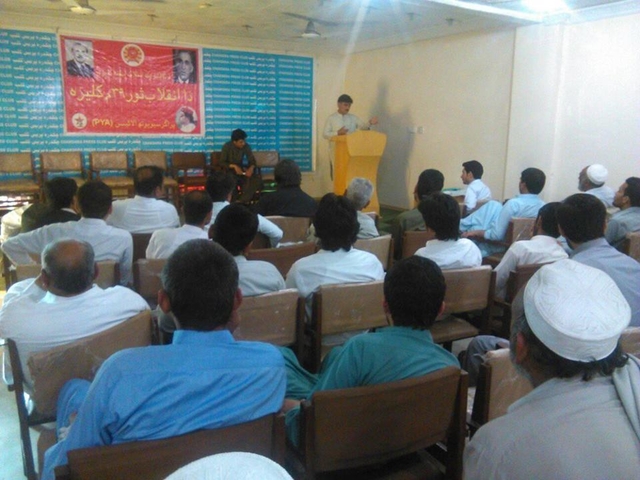 The meeting opened with revolutionary anthems of Afghanistan. Those who addressed the meeting included Siddiq Jan, Ijaz from Buner, Riaz from Dir, Asfandyar Shinwari from Peshawar University, and Suleman, a former student of Kohat University. Speakers discussed the lessons of this revolution and how to move forward in this war-torn region. All the speakers were convinced that there is no way out within this capitalist system, and that masses on both sides of the artificial Durand Line need to overthrow this system through a socialist revolution. Speakers also discussed the murder of Mashal Khan a few weeks ago, and how this has sparked a movement against fundamentalism which has ravaged the lives of this area over last three decades.

This movement has also threatened the state, which tries to sabotage any meeting of revolutionary forces through threats of suicide bombs and search operations by the army. But the morale of the students is high, and they are moving forward to organize more layers on the platform of Progressive Youth Alliance.

A rally was organized by students of Peshawar University on 25 April from Hostel No. 1 to New block. A large number of students participated in the rally, raising slogans against the killing of Mashal Khan. Khalid Mandokhail, Riaz Wazir, and other student leaders addressed the rally and demanded the death penalty for all those involved in the killing of Mashal Khan. The speakers who addressed the rally said that the attack on Mashal Khan is an attack on all those students who are fighting against rising fees and the corruption of university administrations. Speakers also urged students not to forget the sacrifice of Mashal, and to keep his struggle alive. Peshawar University has not seen such a radical rally in last two decades, with a large number of students participating above their political affiliations. 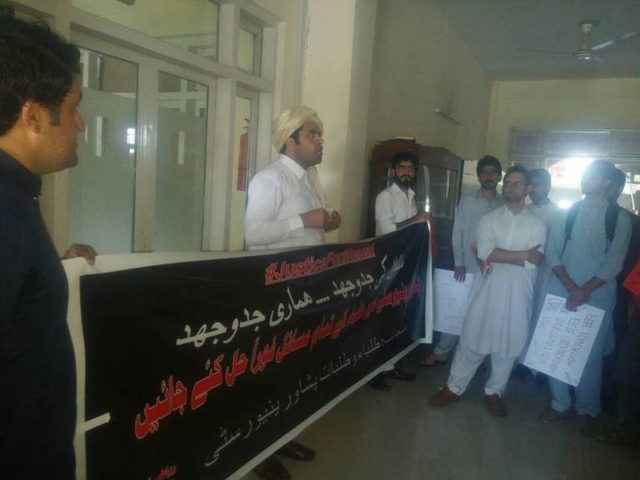