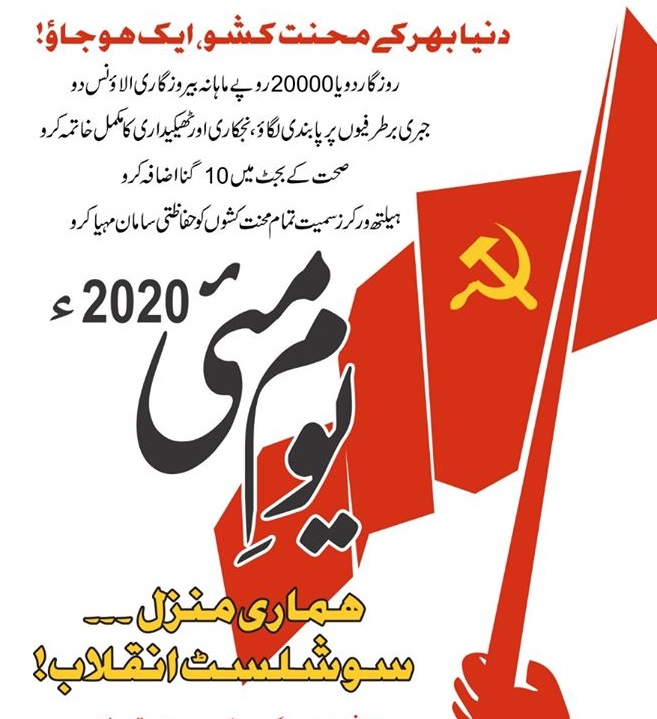 The Red Workers’ Front organised an online May Day rally in which workers from all parts of the country expressed their views and condemned government policies, which are leading to more hunger and death for the workers alongside huge bailout packages for the rich and powerful.

The meeting started at 9 in the morning and was broadcast live on Facebook, YouTube and Twitter. It continued for more than five hours as more and more speakers wanted to participate and speak at the occasion. Sadly, due to time constraints and technical issues, not everybody present could participate. They are now sending video messages of solidarity, which are being posted on social media.

During the meeting, workers participated through their mobile phones, and explained the conditions prevailing in their sectors and how they can come together in this fight against the ruling class. Speakers representing electricity workers, airlines, railways, teachers, health workers and other sectors came onto the live call and explained the situation in their workplaces. The meeting got around 12,000 live views and at the time of writing, views for the meeting have crossed 15,000.

Pakistani workers in the Middle East, Europe, Australia and other parts of the world also watched this online rally, which was the only May Day meeting held this year. Usually, the Red Workers Front, along with many other trade union organisations and workers’ associations, organise May Day meetings across the country, in which worker representatives from that particular area participate with great enthusiasm. But this year, due to lockdown and pandemic, this was not possible. So an online meeting was organised and this assumed a countrywide character. This was also unique, as no other media outlet (including TV channels and publications) report the activities of workers. Now, for the first time, such a meeting was available for everyone to watch live.

The meeting was presided over by Dr Aftab Ashraf, who is also the central organiser of Red Workers’ Front. He also summed up the whole meeting and vowed to continue this struggle for the rights of the working class. He announced the launch of a campaign with demands for full employment, or an unemployment allowance of 20,000 rupees monthly. He also announced that the online meeting on workers’ issues will continue and that Red Workers Front will establish Mazdoor TV for these online discussions in coordination with their paper, Monthly Worker Nama.

Workers join the call and join the fight!

Comrades of the RWF also organised a meeting of workers in the Kotri industrial area of Sindh. Around 20 industrial workers participated to pay tribute to the Chicago martyrs, and discussed the issues faced by workers during the lockdown.

Representatives of the RWF were also invited by the online channel JK TV to a discussion around May Day. This one-hour show has more than 4,000 views now.

Additionally, the RWF published a poster on May Day with demands for full employment, PPE for all workers, and an end to privatisation, among other things. The poster was widely shared on social media.

Three labour leaders from Sheikhupura industrial area, near Lahore, announced that they would join the Red Workers’ Front after this rally and that all workers in their unions from the factories in this area will be part of the struggle for the emancipation of the working class from the tyranny of capitalism.