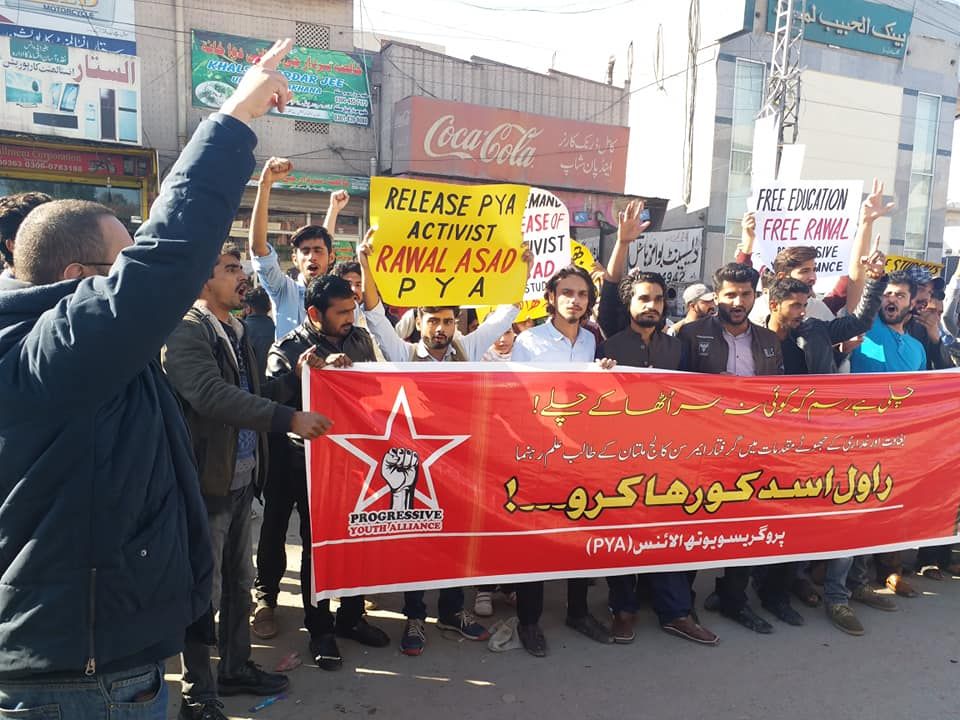 The campaign to free Rawal Asad, the Marxist student activist in Multan, Pakistan continues to gather steam. Today, a protest was held in Multan in which students from various educational institutes participated and demanded Rawal’s release.

Students who participated came from BZ University, Emerson College, the University of Education, the Government College of Technology (GCT) and other colleges and academies in Multan. Participants raised slogans against the state repression against students and curbing the basic democratic rights of the people, charging them with sedition for raising their voice against the killing of a professor.

Waqas Sial, a student of Emerson College, spoke at the demonstration and said that Rawal Asad was charged with sedition because he was leading a struggle against fee hikes and for the restoration of student unions in Multan. He is being punished for organising students in Multan on the platform of the Progressive Youth Alliance and reviving student politics on revolutionary lines. He also announced that a protest by students of Emerson College will be held tomorrow in which a large number of his colleagues will participate. He invited students from other educational institutes to participate in this protest. Students of GCT vowed to bring a large delegation to this protest to extend solidarity to the jailed Marxist. Many female students were also present at the protest, offering their solidarity to Rawal.

Students of Emerson College later reported that college administration is threatening them with dire consequences and making every effort to disrupt tomorrow's protest. They said that representatives from administration are going to all classrooms promoting false propaganda against Rawal Asad. They are telling the students that Rawal Asad was involved in anti-state activities and if any of them joins the protest they could also be charged with sedition and involved in similar cases. 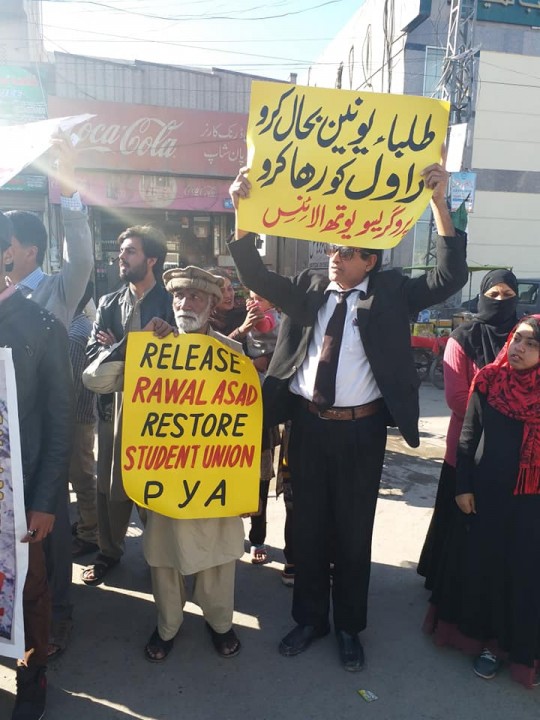 Student politics have been banned in Pakistan for the last four decades / Image: PYA

A similar situation was also reported in BZ University in Multan, which is the largest university of South Punjab. There also false propaganda being spread by the administration in classrooms; and university security arrests anyone distributing leaflets for the campaign to free Rawal Asad. False reports have also been released to the press by the university, in which students campaigning for Rawal Asad were maligned.

But despite all these threats, the morale of the students is very high and they are committed to carrying this campaign to the finish. Today, thousands of leaflets were distributed among the students of Multan, which received an overwhelmingly positive response, and all the students agreed with the demands of the PYA.

Tomorrow, a protest will also be held in the neighbouring city of Bahawalpur in which students of Islamia University and various colleges will participate. There also similar, dirty tactics being used by the university administration, but students have vowed to come out for protest despite all threats.

Student politics have been banned in Pakistan for the last four decades and hatred and threats are spread by the state institutions against student activism. Meanwhile, fundamentalist organisations are free to organise on all campuses and in many campuses around the country, and paramilitary forces are deployed to threaten students who dare to take part in any kind of political activity. The PYA has challenged this situation and is organising students across the country for the restoration of student unions and for free education. These efforts got a huge response, as could be seen in the recent successful central convention of the PYA in Lahore, where more than 700 students participated. Previous city conventions of the PYA also saw huge participation of students. 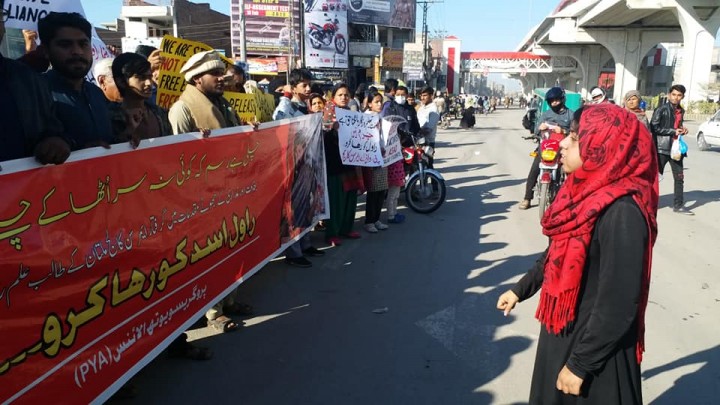 Many female students were present at the protest, offering solidarity to Rawal / Image: PYA

These activities have brought the ire of the state authorities and now they are punishing this organisation for its revolutionary activities. They want to make Rawal Asad an example and want to show all the students to keep away from the struggle for their rights. But their repression has had the opposite effect and more and more students are coming out in solidarity with Rawal Asad.

Students are also appealing to labour organisations and trade unions around the country to join them in this struggle and fight this repressive state. Recently, trade unions have been banned in many departments of the state to accelerate their privatisation. Under emergency laws, trade unions have been banned in the Pakistan International Airlines PIA, State Life Insurance and elsewhere by this government. Thousands of workers in these sectors fear they will get the sack in coming months, to satisfy the ruling class’ lust for profit. But the only way forward is to fight against these attacks of the ruling class and end this capitalist slavery forever.

Our struggle will continue, despite all attacks by the draconian state of Pakistan.

Free education and healthcare for all!