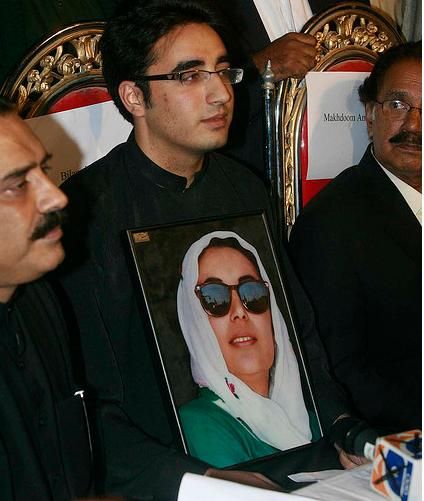 On January 11th 2016, the normally dormant, lifeless and visionless institution called the Senate did something unexpected and radical, even going against its core conservative characteristics. The Senate approved a resolution for lifting the ban on student unions, and a committee was formed to finalise recommendations on this matter.

On January 15th the PPP’s newly installed young chairman and Benazir’s son, Bilawal Bhutto Zardari, asked the two remaining provincial governments in Sindh and Kashmir to reinstate the students unions. We will have to see how far that order is implemented.

However the formation of the students unions is a democratic demand rather than a socialist one. The Marxists support this demand along with other democratic demands that the post-colonial Pakistani bourgeois has failed to fulfill. But the reinstatement of these unions is not an end in itself, nor through their creation can the issues faced by the working class students could be solved.

Bilawal has fallen short of giving a solution to the issues that the students face. The issue of the dearth of education is a burning problem. It is the product of the severe crisis of Pakistani capitalism, which cannot provide even the most fundamental of necessities to the masses.

At the same time Bilawal is reluctant to call neither for the renationalisation of privatised educational institutions, nor the end of the cruel practice of abusing and exploiting health and education for lust of profit. He remains far short of even the basic demands established in the founding documents and first manifesto of the PPP. Bilawal’s reformist and “civil society” gestures are highly unlikely to revive the deteriorating popularity and social base of the party.

This ban on student unions was imposed by the reactionary and vicious dictatorship of Zia ul Haq on October 16th 1979, but was subsequently retracted due to the pressure from below. However, after the 1983 movement against the dictatorship the movement, mainly in Sindh, was ferociously crushed. The army carried out a massacre of more than 1,300 youth, workers and poor peasants. The regime struck back to stifle the students’ movement, which was the main epicentre of sharp resistance to the despotic regime. On February 9th 1984 the unions were totally banned again.

During the most heinous and dark days under Zia’s monstrous regime all union activity was brutally suppressed. Let us not forget the naked and brutal massacre of one hundred and thirty-three workers of Colony Textile Mills in Multan for standing and speaking up for their basic fundamental rights in February 1978.

This was not an isolated incident. It was merely the harbinger for many more episodes of bestiality aimed at crushing the workers’ and student movement. Banning the student unions was a part of this repressive campaign. The goal was to crush the rebellious student movements and to prop up a politics devoid of ideology.

This draconian decision put society through a cruel and prolonged suffering for more than three decades; slowly allowing the poison of fundamentalism, sectarianism, ethnic and other reactionary tendencies to seep into the streams of society.

Despite political repression of the worst kind in Pakistani history, there were many incidents pointing towards a generalised student revolt. One of the most significant uprisings was the courageous struggle of the left-leaning student union in Nishtar Medical College, Multan. It was met with brutal state repression, imprisonment, forced migrations and attempts to kill the leaders. Subsequently, students unions were banned by the cowardly and despotic regime.

The youth and students are like a barometer that indicates the prevailing tempo and temperature within the society. Students are generally the first to light the spark for revolutionary infernos by which the working class enters the arena of history and can overthrow the system of oppression and exploitation.

The students started many of the revolutions after the Second World War in various countries. The movement of 1968-69 in Pakistan was one such example, which was ignited after the murder of Abdul Hameed, a student of Rawalpindi Polytechnic College. Within days this movement was transformed into a revolution that engulfed the whole country from Peshawar to Chittagong.

In the political arena, the coming together of student politics marked the birth of a new party based on socialist ideas and revolutionary slogans, called the PPP. Almost overnight  it was turned into a mass political force during the revolutionary upheaval.

For the reactionary Zia dictatorship to survive, it was necessary to break every enlightened and progressive practice in society. Banning student unions thwarted campus development and student welfare issues; it damaged the personal growth of students and robbed them of healthy debates. Instead of social development through intelligent conversation, the ruling class and their state have instilled a culture of closed and intolerant minds.

The irony is that the post-Zia, the so called “democratic” regimes from 1988 onwards have continued his reactionary policies. The system remained intact, only changing the jargon it was run with, and even this was superficial.

This paralytic and corrupt democracy has failed to even restore the student unions. Despite numerous declarations the fundamental democratic demand did not materialize. There is a reason why the authorities of the deep state and their political toadies never allowed the student arena to be stirred up again, as in the 1960s and 1970’s.

They would rather keep the masses fed on the putrid diet of inane TV anchors, corporate media statements and distorted histories. They would rather dupe the masses with the false promises of the reactionary and obscurantist mullahs. Rather that than reinvigorate the youth with fresh ideas, inquisitiveness and activism, and break the chains of oppression and exploitation.

Such ideological betrayals by the subsequent PPP leaderships could not be concealed by their governments behind the masks of concocted judicial orders. The judiciary is one of the most wily and reactionary institutions of the state. It has been repeatedly used to curb any form of movement or activity that questions the exploitation of capitalism and the oppression of the state.

Its so-called sanctity is manufactured by the various institutions of the state. The subservient intelligentsia of the moneyed elite and the corporate media portray the false and deceptive notion of the corrupt and reactionary judiciary as a sacred institution that can provide justice to the people.

It is not an accident that the most vicious Islamist terrorists are so slyly released on bail, and in some cases exonerated, by the judiciary. The regimes use these acts of the judiciary as an alibi for their own incompetence and cowardice. The PPP regimes attributed most of their betrayals to these judicial acts and decisions.

As a result of these betrayals we have witnessed a crushing domination of private schools, colleges and universities with massive profits in the education sector. Health and education have become the most lucrative businesses in today’s Pakistan. This means that for more and more people health, treatment and education are becoming unaffordable. Fifty percent of the children cannot make it even to the primary level. Only twenty-seven percent of females have access to education. Privatisation of schools, colleges and universities is in full swing. Most entrepreneurs are now investing in health and education rather than in manufacturing production. Students in private and public educational institutions are facing harsh and oppressive administrations, expulsions, frequent penalties and fines, a suffocating environment, conservative curriculums and a very low standard of education.

The ethos students are being indoctrinated with is selfishness, competition, monetary ambitions and “careerism”. How can they become healthy members of society? Decline in culture, rise in crime, drugs, lumpenisation and alienation, is an expression of this.

It was also during Zia’s rule that the “Kalashnikov Culture” and sectarian tensions were implanted in students’ politics. This has wrecked havoc in Pakistan with the bloodshed and fanatical terrorism that is ravaging and tearing apart the social fabric of the country.

The rise of Islamist organisations in student politics after 1972 was primarily the product of PPP government’s reconciliation with the system and the state. Abandoning revolution half-way and ideologically deviating from the party’s socialist fundamentals led to demoralisation among the workers and youth, paving the way for reactionary tendencies.

After Bhutto’s overthrow and assassination, with the connivance of US imperialism, the Zia dictatorship unleashed these fundamentalist vigilantes into the educational institutions. Their survival to the present day is due to state patronage, as they don’t have a strong basis among the students.

The post-Zia period, with its “controlled democracy”, merely continued the super-exploitation of the masses, leading to even more confusion and their alienation from the mainstream politics. Even if the restoration of the student unions takes place, with prevalent commercialised politics, the “establishment” and moneyed classes will try to impose their hegemony on students, as they do in national, provincial, and local elections.

However, this will also lead to ideological discussions and debates on the real issues and ultimately revolutionary ideology and politics will triumph over moneyed interests. Given the misery faced by the students, workers and peasants, a mass resurgence of student politics will serve as a school of revolution. The rulers know this and that’s why they are terrified of the restoration of student unions.

Yet there is no real possibility of the restoration of student unions by these the bourgeois parliaments. They are elite clubs to promote the interests of their sponsors. The students and the youth will have to fight to win this fundamental right.

The students cannot be crushed in the name of degrees and careerism for long. There is no doubt that as the next revolutionary movement in Pakistan resurges the students, especially those from working class backgrounds, will be at the forefront.

The students have to unite and integrate their struggle for fundamental rights with the struggle against capitalism, which lies at the root of all deprivations. In this great undertaking they will draw correct conclusions: that their salvation lies through the breaking of the chains of the working masses. Only by embracing the might and leadership of the working class can they play a role in turning the tide of history for a future of collective salvation.

The average age of the Central Committee of Bolshevik party that led the great Bolshevik revolution in Russia was twenty-eight years. They were mocked by their opponents who called them a party of kids. But historical events proved Lenin right, who said, “He who has youth, has the future”.