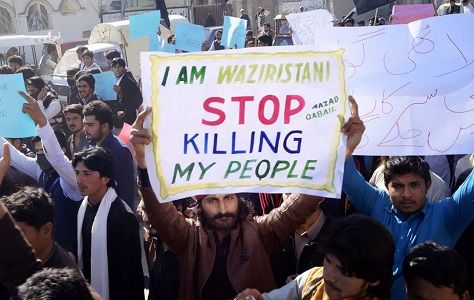 On Sunday 26 May, personnel of the Pakistan Army opened fire on a peaceful protest in the Khar Qamar area in North Waziristan, in which 13 have reportedly been killed so far and at least 30 were injured. Many of the wounded are in a critical condition.

The Pakistani media, both television and print, following the dictates of Pakistani state is reporting this naked brutality in a completely hypocritical way, reflecting the death of so-called freedom of expression. The poisonous Pakistani media is completely fabricating the truth and is claiming that these protestors attacked the army checkpoint and the army opened fire in retaliation. A spokesperson of the Pakistan Army has said as much in a statement, which is being blown up by the prostitutes in the media, and all the protesters are being labelled as traitors and agents of the enemy.

The protesters comprised around 100 people, and were led by elected MPs from the area, including Ali Wazir. They were going to attend a sit-in by local people against abductions in that area. When the protestors approached the sit-in, the road was blocked by the army personnel who tried to stop them. A fierce argument broke out between the army and the protesters, led by the two MPs, after which the protestors were allowed to pass. When they crossed the roadblocks and moved towards the sit-in, live rounds were fired and people started falling on the road. Many videos of this brutality are circulating on social media at the moment but no government authority or media source is paying attention to them. Ali Wazir was immediately arrested while he was trying to rescue an injured person and turned over to the custody of the army. The other MP from the area, Mohsin Dawar, was declared an absconder and he had to gather support of the people of his area in large numbers to avert his arrest by the army. He is still leading a sit-in in that area.

After the incident, all telephone and mobile phone services were blocked in the area and a curfew was imposed. Ali Wazir was presented in an anti-terrorism court the next day and was then handed over to the police for eight days on the order of the judge. In Pakistan, this commonly means a period of brutal torture. The arrest of Ali Wazir was unlawful, as according to the law an MP cannot be arrested without prior permission from the Assembly and its speaker. But no one has dared to follow this law in Pakistan.

All the protestors and their leadership belong to the Pahstun Tahafuz Movement (PTM), which is raising its voice against the injustices and brutality of the Pakistani state in tribal areas – which are commonly called FATA in Pakistan – and for Pashtuns generally. Due to the pressure of this movement, these tribal areas were merged into the Pashtunkhwa province last year and brought into the fold of Pakistani constitution and laws. This ended the period of black laws, which denied basic legal rights for the population of the area, and were imposed by the British Raj and continued long after so-called independence. This movement was also demanding the end of army operations in Pashtun areas and state sponsorship of terrorism in Pakistan. Just a few weeks before this incident, the National Assembly of Pakistan unanimously approved a constitutional amendment, which was moved by MP Mohsin Dawar. But now the same MPs are being called traitors and enemies of the state on national television and press. 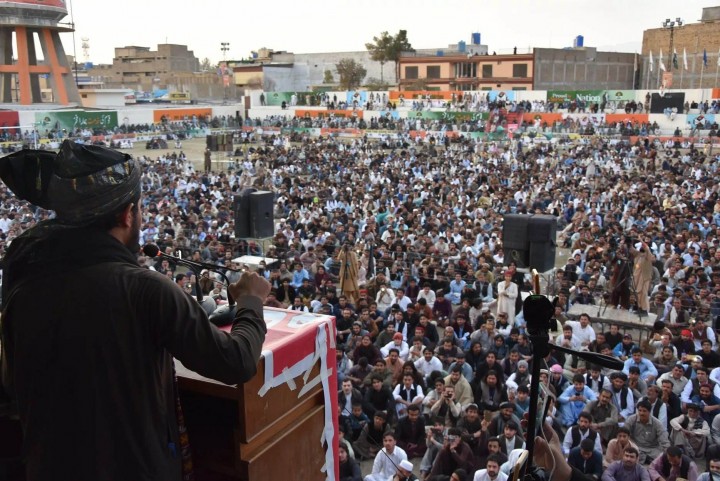 The PTM raised its voice against the brutality of the Pakistani state, but hasn't connected with other oppressed nationalities or with the working class of the country as a whole. Now the state is cracking down / Image: fair use

The Pakistani state, following the dictates of US imperialism, used these areas as a launching pad for the dollar jihad in Afghanistan in the ‘80s. After the US-led invasion of Afghanistan in 2001, and the so-called war on terror, these areas were again used to impose a war for the profits of the military industrial complex in the US. The people of these areas, along with millions living in Afghanistan, have faced the brutalities of these imperialist wars over the last several decades. Hundreds of thousands have been killed, while millions have become homeless and forced to live in extreme poverty. The imperialist war in Afghanistan is still continuing, sending shockwaves around the region on a regular basis. The Pakistani state and its ruling class have benefitted immensely from these wars, pocketing billions of dollars, while millions are living in extreme poverty and suffering the loot and plunder of the ruling class in collaboration with the imperialist financial institutions like the IMF and World Bank.

The PTM has raised its voice against the brutality of the Pakistani state but so far hasn't connected successfully with other oppressed nationalities struggling against this brutality and with the working class of the country as a whole. The leadership was relying on bourgeois liberals and their ideologies, along with other rotten parties and institutions of the state, whose bankruptcy and impotence have been exposed in this incident. The PTM was also unable to give a detailed political programme to rally more support around them. Now the state is exploiting these weaknesses and has come down heavily against them, trying to finish off this movement once and for all through extreme repression and brutality. An army spokesperson had already threatened them in a press briefing last month, saying that their "time is up".

There is a seething anger and mood of revolt against all this brutality among the masses, especially Pashtuns, and it will express itself in various ways in the coming period. No movement can be crushed by savagery forever, it will rise again and again until it finds a way to express its grievances and the molten lava of hatred against all the state institutions. The masses will come again in big numbers, sooner or later, to take account of all the blood spilt by the ruling class to protect its luxurious lifestyle and plundered wealth. The time for the oppressed masses is far from over, it has yet to begin. It has been proved once again that nothing can be solved within the confines of this class-based capitalist system and the only way forward is to overthrow it through a revolutionary struggle of the working class.

For an end to state repression against the PTM and the immediate release of Ali Wazir and all political prisoners!

For irreconcilable struggle against imperialism and Islamic fundamentalism!