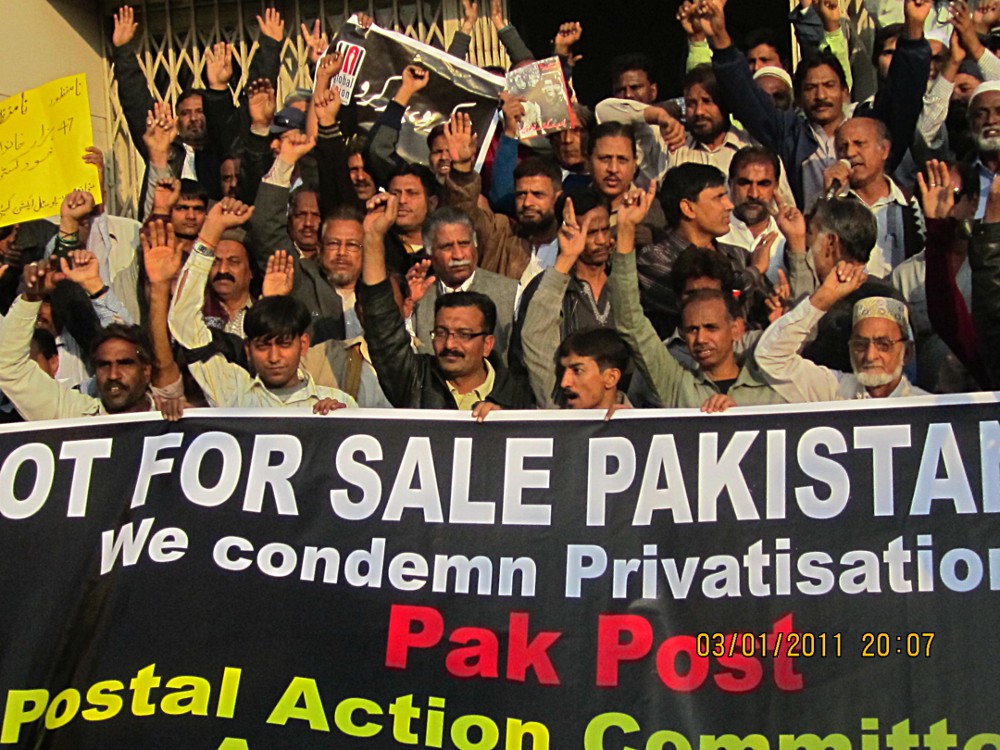 The incumbent PML (N) regime in Pakistan has announced the biggest ever privatisation of state assets in the history of Pakistan. Sixty eight State Owned Enterprises (SOE’s) have been identified to be sacrificed on the altar of aggressive “neo-liberal” capitalism.

In direct contrast to the idea being peddled by the corporate media, most of these SOE’s like the Oil and Gas Development Corporation Limited (OGDCL), several large banks and oil refineries are not loss making but are those which have yielded large profits with future prospects of higher profitability and growth. The notion that privatisation is to end the loss incurring enterprises is a total deception if one looks at the state of privatised enterprises.

According to the Asian Development Bank’s (ADB) 1998 report, a total of 166 state-owned enterprises have been privatised since 1990 for a cumulative sum of Rs476.5 billion. Most of this sum has gone to finance budget deficits. Over 78% of these enterprises have either shown no improvement or have actually performed worse since privatisation.

This privatisation resulted in the concentration of wealth in the hands of a few select families, who have controlled the economy since the establishment of Pakistan. These new owners rather than investing ended up stripping down these assets, downsizing and carrying out unprecedented attacks on the terms and condition of the workers, mass redundancies and attacks on trade union activity. This privatisation has been carried out at a very heavy social and economic cost.

The current mass selloff has been drafted in consultation with people like Shaukat Tareen, who owns a private bank, and a Lahore-based industrialist, Mian Mohammad Mansha. These and other capitalist vultures have massively invested in the PML(N) and its election campaign in order to be given a free reign to devour these enterprises to their bare bones.

This is not a new phenomenon. Pakistan’s first experience with privatisation took place in the 1950s when the Pakistan Industrial Development Corporation set up industrial units throughout the country, funded, developed and run by the state and then transferring them to the private sector. This resulted in concentrating wealth in the hands of the so called “22 families”. The situation today is no different.

The Sharif government is in itself composed of mainly the capitalists who have huge stakes in this privatisation and will be the main beneficiaries from this exercise of open loot and plunder of state assets. Banking and finance, oil, gas, energy, fertilizers, engineering, minerals and natural resources, infrastructure projects such as the Civil Aviation Authority (CAA), Karachi Port Trust (KPT), Port Qasim Authority (PQA), Pakistan Railways, National Highway Authority are all up for grabs. Other sectors include Tourism, Telephone Industries of Pakistan, Printing Corporation of Pakistan, National Book Foundation, Pakistan Industrial Development Corporation (PIDC), Utility Stores Corporation and stores, Export corporations, Shalimar Recording Company and even the Convention Centre Islamabad will be put up for bidding and sold off at throw away prices. The only exceptions are various institutions of state coercion such as the police, prisons, judiciary, armed forces and commercial and real estate enterprises of the armed forces.

This mass selloff is more akin to the privatisation carried out after the collapse of the Soviet Union, where the sellers, the bidders and buyers were the same people or from the same family, class and cartels. In the process we will see artificial, fake, concocted identities, names and corporations. The whole exercise will be a farce from beginning to end. The question of transparency in a society and state drenched in corruption and malpractices is a utopia to say the least.

In a period of unprecedented crisis of capitalism on a world scale, there is hardly any investment taking place anywhere. The advanced capitalist countries and their financial institutions are lurching from one crisis to another and investments in the so- called ‘emerging economies’ have atrophied over the last few years. World investment dropped by more than 14 per cent in this period. With the present security situation, energy crisis, hikes in production costs and the rotten state of the infrastructural facilities in today’s Pakistan no serious investment can be expected. This means that bidding will be low and rigged and with their party in power the mafia bourgeois will turn the whole process into an outrageous orgy of plunder of the assets and resources of the state.

In the 1980’s when Margaret Thatcher embarked upon a vicious privatisation policy it even shocked some of the Tory veterans. Harold Macmillan the Tory prime minister of Britain from 1957 to 1963 dubbed this privatisation as “selling off the family silver”. Ever since the Second World War till the mid-seventies the rapid growth and development in the advanced capitalist counties was mainly due to the massive intervention of the state in the economy. Even in the defeated countries such as Germany and Japan it was this Keynesian method of state capitalism in the form of the Marshall Plan that paved the way to rapid reindustrialisation and development during the post war upswing.

This policy was also followed in the South Asian subcontinent. In India under so -called Nehruvian ‘socialism’ 74 per cent of India’s economy was nationalised. In the 1960’s the high growth rates in Pakistan were also due to the greater intervention of the state in the economy and the huge infrastructural projects. However, in these countries these growth rates failed to raise the living standards of the masses and increase the social development.

Under the government of the PPP led by Zulfiqar Ali Bhutto of the first half of the 1970’s the reforms in health, education and other sectors were only possible due to large scale nationalisations. But they could not be sustained in a redundant capitalist system that had failed to carry out the tasks of the national democratic revolution. With the advent of world recession in 1974, even in the advanced capitalist world, the state could no longer afford to sustain bailing out state capitalism. It was precisely because of this that they embarked on the old “trickle-down” economics being peddled by Milton Friedman a new guru worshipped by the likes of Reagan, Thatcher and General Pinochet of Chile.

This so-called trickle-down economics was behind the deindustrialisation of Britain, turning it from an engine of the world to a sea of artificial finance capital of casino capitalism and turning the greatest economy of the world, the USA, into the largest debtor in the world. In countries like Pakistan with the uneven and combined patterns of weak capitalist growth, these policies have only brought misery and destitution to the teeming millions. Health and Education and other essential services have been deeply penetrated by private capital as the state failed to provide these basic services which are not a privilege but a fundamental right in any civilised society. The masses are being deprived of these essential needs, as they cannot afford decent health services and education so expensive in the private sector. And it is these sectors where most of the private investment has flowed due to their indispensability and larger rates of profits.

This new assault of privatisations will further aggravate the already excruciating curse of unemployment and price hikes. Deprivation in society will only worsen and the yawning gap between the rich and the poor will become even greater. It is true that corruption and mismanagement were terrible in some of the SOE’s, but in a crisis-ridden capitalism under the dictatorship of financial oligarchy it was inevitable. A system where the formal or the official economy has contracted to less than one third of the total economy, corruption and malpractices flourish and have become the social and ethical norm.

The trade unions are weak and fragmented. The leadership of the trade unions long ago capitulated to capitalism. The main party of the masses, the PPP, embraced capitalism since the early 1980’s and the leadership abandoned the socialist origins of the party. It was not Sharif but Benazir Bhutto who first embarked on the path of privatisation. When Benazir came to power in 1988, she immediately hired the services of NM Rothschild – one of the world’s largest financial advisors – to carry out a feasibility study for privatisation in Pakistan. That regime of Public Private Partnership only gave the masses price hikes and poverty.

The present capitalist regime, however, now wants to go the whole hog and sell off the whole country to enrich themselves in their insatiable quest for higher profits. They believe that the class struggle is finished and they have defeated the proletarian masses forever. They are highly mistaken, however. The tolerance of the masses is in its last phases. How much longer can the toiling masses endure this exploitation and coercion? Keynesianism and Monetarism, both models of capitalism, have only exacerbated the pain and misery of the working masses. Nationalisation and half measures under the rule of capitalism are no solution. This means that once the class struggle erupts it will have to fight to the finish. The whole system has to be transformed from the economics of greed and profit to the economic system of the fulfilment of human needs, i.e. a planned socialist economy.