On that ill-fated night of July 4th-5th 1977 Pakistan suffered a bloody military coup, the scars of which are still felt today. The coup led by general Zia ul Haq brought in the most vicious and brutal regime ever in the country’s history. The country’s first elected Prime Minister on the basis of adult franchise, Zulfiqar Ali Bhutto was deposed and incarcerated. In April 1979 he was hanged with the complicity of the judiciary subservient to the army. 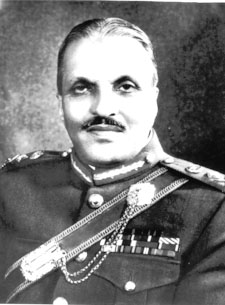 General Zia ul Haq An orgy of unprecedented violence and brutality was unleashed against the oppressed classes of Pakistan. The tyrant Zia ul Haq’s eleven year despotic rule was a nightmare. Thousands were flogged and lashed publicly; hundreds were strung to the gallows and tortured in the notorious centres of state repression and incarceration. The main targets were the left-wing and PPP activists, trade unionists, poor peasants, oppressed nationalities, women and other sections of the deprived and the impoverished. There was a spate of massacres, from the mass killing of the workers of the colony textile mills in Multan in 1978 to the genocide of the peasants and youth during the 1983 movement in Sind.

These harrowing atrocities were in fact the revenge of the Pakistan’s ruling classes and the state against the workers, peasants and the youth of the country who had dared to revolt against the existing exploitative order and challenge the relations of property and ownership of wealth, land and the means of production of Pakistan a decade earlier. Bhutto who had bruised sections of the ruling elite through the reforms that were the by-product of the pressure of the 1968-69 revolution, was humiliated and executed with a vengeance.

Art, literature, music, culture, cinema and social life as a whole were strangled by the obscurantist repression of the Zia regime. However, most industrialists and landlords were ecstatic. Not only did they get back the industries nationalised by Bhutto with hefty compensation, but the military dictatorship promoted draconian pro-capitalist policies in the economy and society.

All this was done in the name of Islam. U.S. and European imperialism not only endorsed this vicious dictatorship, but they sponsored and supported this cruelty. Yet today they have the cheek to shout about democracy, human rights and freedom. What the imperialists mean by “democracy” is freedom for the capitalists and the defence of privilege within the market economy, not freedom for human beings. The Jamaat a Islami and other religious parties played the role of an auxiliary team of this bigoted regime. They spied on the workers and students in the resistance and facilitated their arrest, torture and murder.

Before the coup, the right wing had launched a movement in the name of Islam that was sponsored by the CIA against Bhutto’s PPP government. In spite of the fact that there was discontent within society due to the fact that the reforms launched by the then PPP government had inevitably fizzled out as it attempted to stay within the confines of a crisis ridden state capitalism, that movement failed to dislodge Bhutto.

Zia then used Islam to justify his martial law to gain the support of the petty bourgeoisie and the primitive sections of society. He came out clearly standing on the theocratic basis of the state. In December 1981 he said, “Pakistan is like Israel, an ideological state. Take out Judaism form Israel and it will collapse like a house of cards. Take Islam out of Pakistan and make it a secular state: it will collapse.”

Official religiosity was imposed in the army, bureaucracy and institutions of the state and society. Jamaat and other religious parties infiltrated their cadres in the state institutions, from the judiciary to the armed forces. Its effects are still evident in society today. Zia ul Haq wrapped his contempt for the deprived in the garb of the piety he flaunted so much. On the question of the responsibility of the state to fulfil the basic needs of the poor he had this to say, “Any increase or decrease in your sustenance comes from him. Trust in God and he will bestow upon you an abundance of good things in life.”

But power and religiosity drove Zia into a state of insanity. He had the delusion of hoisting the crescent and star in Central Asian capitals He thought he was invulnerable. His megalomania was becoming a liability for the Americans. Hence his dramatic elimination [his plane was brought down, killing all on board], like many of the imperialist stooges in the past, became inevitable.

Twenty three years after his demise his poisonous legacy prevails in the state and politics of Pakistan. The Islamic parties were his partners in repression. The MQM and other ethnic based groups were promoted by agencies under his command to fracture the class unity of the workers, especially in Karachi, the bastion of the Pakistani proletariat. The leaders of all the Muslim leagues are his protégés. But the most ironic position is that of the PPP where several of Zia’s political heirs, including Yusuf Gillani, are the stalwarts of today’s party. It is not just a question of the individuals, but the policies of the tyrant that continue to dominate and weigh down on society. The blasphemy law, the Hudood Ordinance and other draconian laws against women and the oppressed are flourishing. None of the subsequent pseudo-democratic regimes have been able to repeal them. Nor can they in this socio-economic set up.

One of the tragedies of the movements in the neo-colonial world is the exaggerated role of the individual. This in fact reflects a certain cultural primitiveness. When individuals are made the ultimate focal points of the movements, it becomes easier for the ruling political elites to manipulate these revolts after the fall of these personalities. They can limit, restrict and channel the movements to the statuesque if there is no revolutionary party to give leadership and a revolutionary perspective to the mass movement. Similarly, when movements get personified in individuals, again they can be diverted and destroyed by the elimination of those individual leaders. Dictatorship or democracy, the oligarchy of finance capital continues its crushing domination.

Ted Grant wrote in the 1960’s, “In the history of society there have been many methods of class rule. This is especially true for capitalist society, with many peculiar and variegated forms: republic, monarchy, fascism, democracy, Bonapartist, centralised and federal...”

Unless and until the social and economic system, for the preservation of which the Zia brutality was inflicted upon the people of Pakistan, is not transformed, the wounds under the scars of July will continue to fester. The idea of having a secular, progressive, democratic and prosperous Pakistan within the confines of this rotten capitalist feudal system will remain a utopia and a deception for the masses.