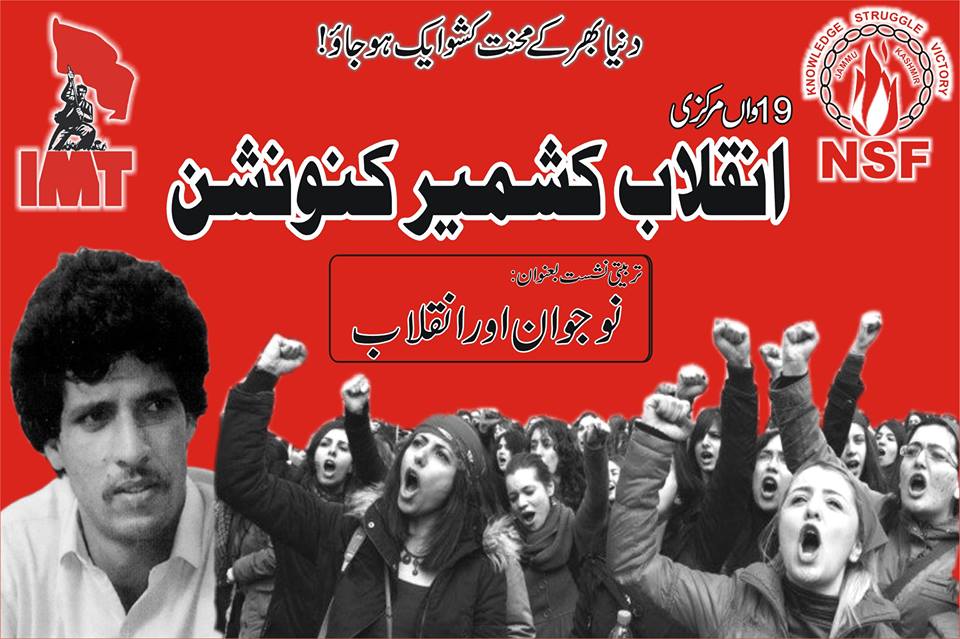 The Jammu Kashmir National Students Federation is holding its 19th central convention on 24 and 25 September in Muzaffarabad. The convention will coincide with the anniversary of the killing of former General Secretary of JKNSF Fahim Akram who was martyred by the reactionary forces.

[We encourage all our readers to take up this report in their union, party or student organisations in order to to pass and send greetings for the convention. Send messages to editor@marxist.com and editor@struggle.com.pk]

Hundreds of youth and students are actively involved in the preparations for the convention across Kashmir. In each town and village meetings are being held and units of the JKNSF are being organized in colleges and universities. A massive mobilization of youth and students is gaining momentum gradually as the dates of the convention are approaching. 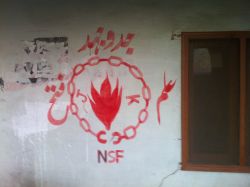 The convetion was advertised on walls across the regionThis year’s convention is being held in the background of a chaotic world situation. The deepening world economic crisis is spreading tremors of instability across planet. Events of all kinds, from revolutionary to counter-revolutionary, from wars to terrorism, and from open splits in the ruling class to big strikes and general strikes of the workers, are shaking the consciousness of the youth and the masses.

Across the subcontinent we see a graphical expression of what Lenin once said “Capitalism is horror without end”. National oppression is intensifying a hundred-fold along with class oppression. Periodical calamities such as floods, landslides and earthquakes are becoming more ferocious and disastrous and killing more poor because of the deteriorating conditions of the infrastructure.

Recent floods killed more than 400 people and affected millions on both the Pakistani and Indian sides of Kashmir. Governments on both sides are completely exposed as impotent to counter these devastations and millions are still caught in floods and waiting for rescue efforts. 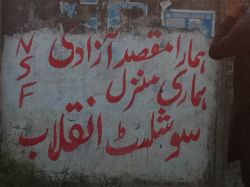 India and Pakistan are both spending billions of dollars on weapons and nuclear technology but are unable to rescue people affected from floods on a routine basis. In these objective conditions this convention will become a focal point for all those who are seeking a way out from this hell of misery, sorrow and death.

StickerFifty thousand leaflets have been printed for a mass campaign in all major towns and cities. Ten thousand posters had been produced to paste on the walls of educational and other institutes and also at all the prominent and central places in towns and cities. 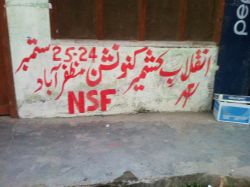 Thousands of stickers have been printed with revolutionary slogans and demands. Slogans and demands are also being written on walls across Kashmir on the main roads. Hundreds of flags and banners are being produced to decorate the convention hall. One thousand invitation cards have also been produced to invite the trade unionists, political activists and journalists. 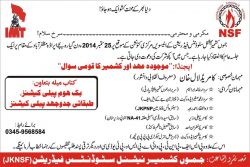 Invitation cardDelegations of five members carried out a hectic speaking tour across Kashmir as part of the preparation campaign for the convention. During this tour public meetings, discussions and press conferences have been held. The delegation consisted of comrade Rashid Shaikh, 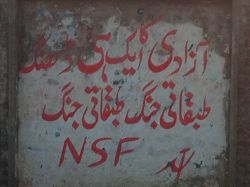 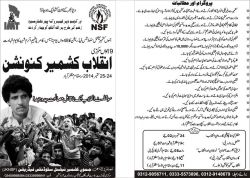 LeafletBecause of the disputed nature and unsettled division of Kashmir thousands of Kashmiri families living near the Line-of-Control (LOC, the line which divides Pakistani and Indian Kashmir) are denied travel across the line to visit even their relatives. The visa applications of ordinary Kashmiris are never approved by both sides and the travelling of political activists, especially of Marxists, is completely restricted.

During the recent visit of Yousaf Tarigami, the state secretary of the CPIM (Communist party of India Marxist) and member of the legislative assembly of Kashmir, to Pakistan it was decided that a joint protest of revolutionary youth on both sides should be held at the same place, on the same day and same time on both sides of the LOC. 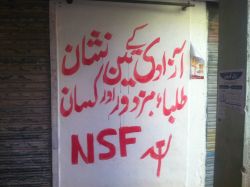 Despite all the difficulties caused by recent floods, comrade Tarigami is trying his best to organize a rally from Srinagar which will march towards the Chakothi sector crossing point and the comrades of the JKNSF will also march from Muzaffarabad to the same point on the same day to demand an end to all the restrictions on travelling for Kashmiris across the L.O.C. It is being planned that on 24th September at 4pm both rallies should arrive at the crossing point, but unfortunately a devastating flood is affecting Indian-occupied Kashmir and is causing huge damage which has cut across all routine life including the preparations for the protest march. But from the Pakistani side the comrades of the JKNSF have already prepared for the rally as per scheduled. 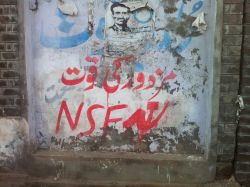 To generate activities on a daily basis, camps have been organized in all towns and cities. All the camps have been decorated with red flags and banners and revolutionary songs are being played from each camp. All comrades gather daily in the camps to discuss all the work, organize meetings, discussions and visits. To give a further push to the preparations and the mobilizations, and to charge the atmosphere, motorcycle rallies are being organized in the localities which travel around 20 to 30 kilometres. The motorbikes carry red flags and the comrades chant revolutionary slogans. The target is to recruit a further five hundred students into the JKNSF from this convention. 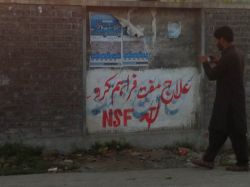 The comrades across Pakistan are also preparing their delegations to attend the convention. Delegates will also participate from major universities in Pakistan and also from different progressive organizations of youth and students.