A seminar on the topic of “Price hikes, privatization, unemployment, Reasons and Solution” was held at the PMA House, Garden Road, Karachi on December 30th. The program started at 3PM and was chaired by the Central General Secretary of the PTUDC, comrade Nazar Mengal, while comrade Lal Khan was invited as chief guest. 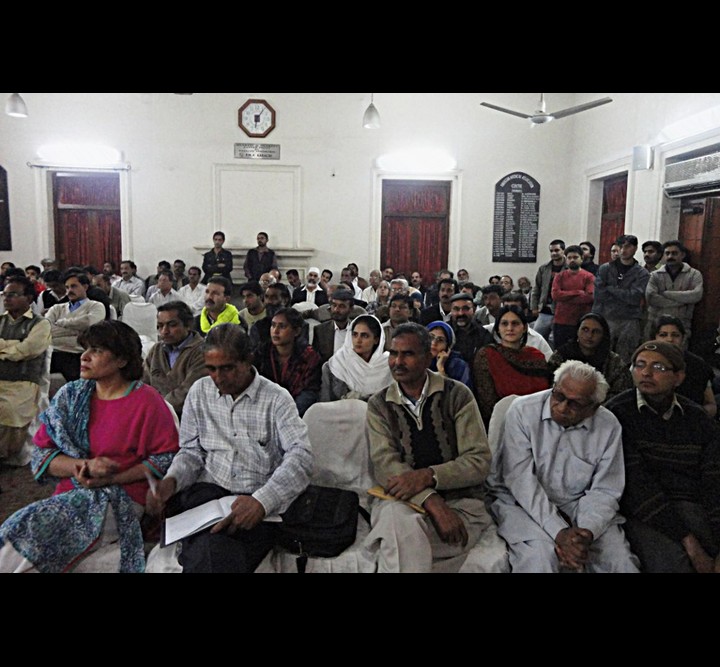 Many youth from the BSO (Azad), Sindh Peoples’ Youth from District Centre Karachi, PSF, JKNSF, Lawyers from National Lawyers’ Forum and the People’s Lawyers Forum, Doctors from the Pakistan Medical Association , journalists and workers from various institutions participated with a revolutionary spirit. Many women from different professions were also present.

Comrade Zubair Rehman analyzed the world capitalist recession and the movements of students and workers on an international scale. Asad Rehman explained the oppression of students by the university administration at the Agriculture University Faisalabad and recent struggle of the students against privatization all over Punjab. Comrade Anwar Panhwar explained the objective conditions behind the decay of nationalism. Comrade Shakeel Khan sang an enthusiastic revolutionary song, the warmth of which could be seen on the faces of everyone present. Khrsheed Khatak in his speech expressed the miserable living conditions of the working class all over the country and said that the workers were ready to fight the war against privatization till the end. Dr. Jafar Ahmed said that privatization was the reason behind price hikes and unemployment. Comrade Amjad Shahsawar appreciated the struggle of Pakistani youth along with their Kashmiri brothers and concluded that there was no solution to the Kashmiri dispute but a Socialist Federation of Sthe ubcontinent. Ilyas Khan criticized bourgeois democracy and emphasized the fact that the founding document of the PPP should be acted upon. Comrade Jam Saqi condemned the policies of the Gillani regime and paid tribute to the policies of nationalization of Z.A Bhutto. Comrade Riaz Hussain Baloch condemned the conciliatory policies of the PPP government which were causing the economic distress of workers all over the country. He further explained the reasons behind the ethnic violence in Karachi and emphasized the need of a class struggle.

Comrade Lal Khan in his detailed speech explained the reasons behind the economic recession and political instability all over the world. He condemned the policy of Public Private Partnership of the PPP government and compared it to an illusion shown to workers in order the pave the path towards privatization. Comrade Lal Khan further explained how a Reformed GST was just another non-issue created by the state to divert the attention of the working class from the real issues. Prices of oil, electricity and other commodities arre being raised while the bourgeoisie media is telecasting the so called “hot debates” on RGST in the National Assembly. He said that the ruling class and state were using the assassination of Benazir Bhutto for their own interests and asked why they don’t mourn over the economic murder of 1132 people everyday who die because of malnutrition and poverty. Half a million women die each year during pregnancy and childbirth in Pakistan as they don’t have access to scientific methods of treatment. Comrade Lal Khan said that capitalism is killing humanity systematically and a worldwide Socialist Revolution is the only cure.

Comrade Nazar Mengal in his summing up speech condemned American and Chinese imperialism as well as the Pakistani intelligence agencies that are responsible for the suffering and miseries of the Baloch people. He further analyzed the rotten character of the nationalists and lack of visionary leadership in the labour movement. In his concluding remarks he said that people are once again looking towards the Marxists for an alternate and a socialist revolution led by a Bolshevik party will end this tyranny and cruelty.

All the speakers criticized and condemned the anti-worker policies of privatization adopted by the PPP government, especially Public Private Partnership and vowed to struggle against them. Demands were put forward for the urgent dissolution of the Privatization Commission, to take back the increase in prices of petroleum products, to abolish the fake judicial cases against labour leaders, to make permanent all the workers in all the institutions, to pay an unemployment fund to all the unemployed and the following strategy was passed in order to materialize all these objectives: