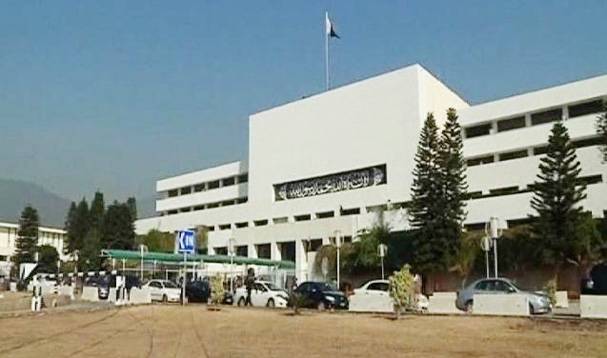 While the masses have been toiling and trying their utmost to come to terms with heat, dust, humidity, unrelenting power outages, price hikes, poverty etc., the elite has been busy hurling accusations and counter allegations against each other in a theatre of the absurd. This has become almost a summer ritual which takes place every year.

The recent rows which have led to the unseating of the PTI MP’s, and the registrations of the cases against Altaf Hussain, barely matters for the masses. After all, how long can such shenanigans keep the masses bemused with their theatrics and gimmickry. The man for all seasons of moneyed politics, Maulana Fazal Ur Rehman, with his wit and expertise of political manoeuvres, and the verbal somersaults of Altaf Hussain, intoxicated with the power politics of mesmerising and hypnotising Nine Zero.

All this shows that Pakistan’s corrupt and reactionary ruling classes dominate all parties in this political set up. From the Republicans and the National Democratic Alliance to the Convention Muslim League, Islami Jamhoori Ittehad and the many faces of Pakistan Muslim League, including PML (J), PML (Z), PML (F), PML (N) and PML (Q). They have all played to the whims and needs of the Pakistani bourgeoisie and the military brass. The PPP’s leadership, ever since the 1980’s, have abandoned the working classes and have been striving to cash in its their traditional mass support to become a segment of the capitalist political framework. Whether through direct military dictatorships, or a shameful facade of democratic rule, a nexus of pliant civilian politicians and elites has been cultivated. From religious obscurantism to secular liberalism, top bureaucrats, judges and generals, this group has been crystallised to extract financial gains and perks through state power and unleash super exploitation on the masses.

The PTI is no different. Over the last few years we have witnessed politicians from the same putrid pool somersaulting back and forth and landing in the cesspool cesspit of PTI. Imran Khan and PTI do not have anything to offer to the masses. Khan’s answers to complex economic, political, social and strategic problems seem to come straight from the military honchos or opinions fabricated by the corporate media. In reality this really is simply a continuum continuation of the same drudgery, exploitation and misery under this obsolete and parasitic capitalist system.

The verdict of the judicial commission, on the May 2013 elections, proves the fact that the institutions of the state, in the last analysis, exist to defend the status quo. It seems Khan is oblivious to the correct conclusions to draw from this. Unlike his wily cousins in the PML (N) who, with their extensive expertise of ‘deals’ with the state, have managed to sneak into the echelons of power by manipulating and bribing the institutions and individuals that mattered. No doubt the decisive factor in these results, for the autocratic establishment, was the role of the tried and tested, ever-complying Nawaz Sharif.

Khan is pandering to the urban, educated middle-classes and has been trying to mould himself and the PTI in the shoes image of Bhutto and the PPP of 1970.  However, the PTI neither has the PPP’s 1970 socialist manifesto nor the revolutionary struggle of the working masses, which existed at the time, fighting against the military dictatorship of General Ayub and Pakistani capitalism to base themselves on. Had there been a genuine revolutionary Leninist party which existed during the 1968-69 movement we would not have been discussing Khan today. Unlike the PPP of 1970, Khan refuses to solely represent the working classes. The PTI talks about the assets of politicians, stored in foreign banks, looted from the people, but glaringly they omits to mention the money stashed in Swiss banks by the generals, judges, bureaucrats and businessmen. He fails to understand why the parallel economy is three times the size of the official economy and why hardly anybody is paying any taxes apart from the poor masses in the form of sales tax. Ending “thana” culture by depoliticising the police and abolishing “patwaris” is not going to put ‘rotis’ (bread) on the plate for the poor masses let alone provide access to affordable justice, education and health for them. Despite their boastful proclamations of transforming the Khyber-Pushtoonkhawa, nothing has changed. If anything it has gone from bad to worse for the masses in general.

Now the fissures in the elite of the PTI are opening up. The pie is too small to share out and the contenders are too many. Imran Khan suspended the membership of the retired Justice Wajihuddin Ahmad on Wednesday for violating party discipline. As head of the PTI’s election tribunal, Justice Ahmad had found some key leaders involved in the selling of posts in the party polls. Since March, he had been demanding the removal of some top PTI office-bearers, including General Secretary Jahangir Tareen, but Mr Khan blatantly refused to carry these out. Justice Wajih’s response to his suspension was revealing. He said, “The problem is that ‘if you love me then also love my dog’. I have never done it and shall never do it.” On Tuesday the PTI chairman vented his frustration at the crisis by warning all party members against exposing party issues to the press and said the membership of anyone who violated the order would be cancelled.

However in the first place it was Justice Ahmed’s own misconception that, being an ‘honest’ judge, he could conduct free and fair elections in a party that runs on the financial and logistical support of these billionaire politicians whose business interests are more dear to them that any ideology or principles. They joined Khan’s bandwagon in the mistaken belief of a quick shortcut to power. They wanted to exploit whatever avenues were possible with which to preserve and expand their own personal wealth. However for the party that had made so many promises and raised the hopes in of the middle classes such dissent, crisis and wrangling were inevitable.

We live in a country with a pulverised society and distorted socio economic patterns of development, based on the combined and uneven development of capitalism and the outdated feudal relations which mars and disfigures the culture. It This tragically ends up exaggerating and inflating the role of an individual. But with the crisis intensifying, leading to more dissatisfaction and disillusionment individuals, even those with the greatest of authority, cannot retain this unity without ideological or class cohesion. Bonapartist tactics and fear have their own limits. The disillusionment of the masses for the ‘alternative’ is spreading rapidly. This also builds pressure upon those who had staked their money and influence for on a party that they thought could be catapulted into power. 2018 is too long a period in a fragile and uncertain society like Pakistan. Slogans of patriotism, honesty and justice cannot heal the pain of the poverty, deprivation and suffering the masses are going through. However these slogans are nothing new and the toiling classes have had enough of them. Their lives have only worsened with the passage of time. Democracy, religion and sovereignty etc. cannot provide food, shelter, health, education and justice. They can only be attained through money. The money is with the exploiters. In whichever party these leeches will formulate policies where rich become richer and the poor even poorer. That is the law under which capitalists can sustain their rates of profit. The PTI’s programme and leaders are part of this very system. How could they ever bring a change to end the plight of the oppressed of the land?