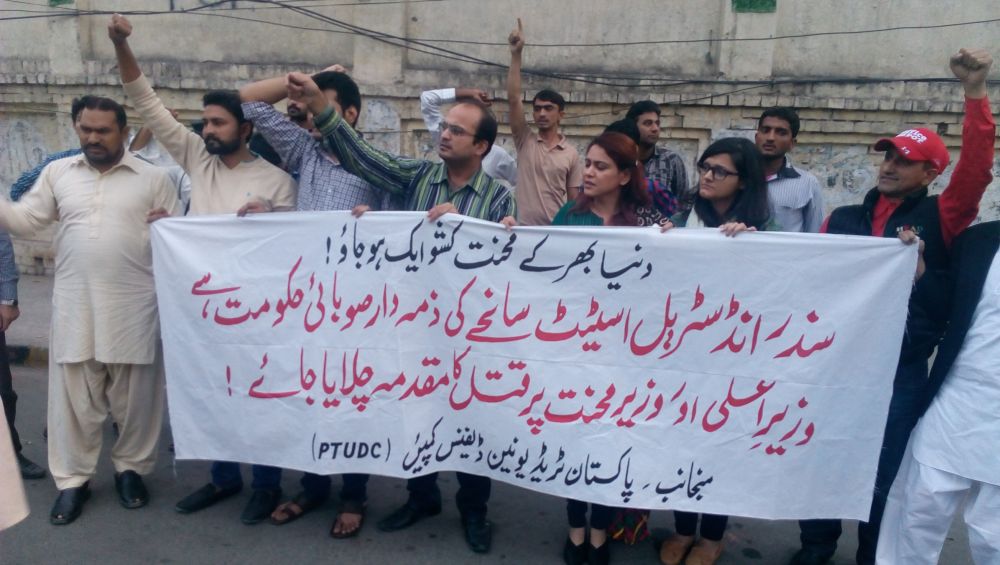 On 4th November a factory roof collapsed in Sundar Industrial Estate located near Lahore. More than 500 workers were working in the factory at the time of the collapse. Dozens of dead bodies have been recovered but many more lie there waiting to be bulldozed as the rescue operation has ended.

Pakistan Trade Union Defence Campaign held protests against this brutality in many cities across the country and demanded that Chief Minister Shahbaz Sharif and Labour Minister Raja Ashfaq Sarwar of Punjab should be tried for murder. No labour laws were being followed in this factory as is the case in most industrial units across the country. In Sundar Industrial Estate there are 450 industrial units with up to six thousand workers working there but there are no registered trade unions in the area.

No union rights means that owners can hire and fire workers at their will, no limit of working hours or holidays and no minimum limit for wages. According to reports of the PTUDC delegation that visited the collapsed factory soon after the disaster, around 100 children were working in this factory under precarious conditions. 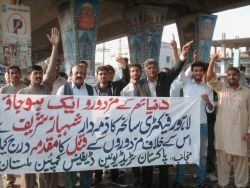 Owners of the factory, who are also office bearers of ruling party PML(N) in the district, have been released on bail and the labour department has issued a statement  that they were not responsible for the incident. 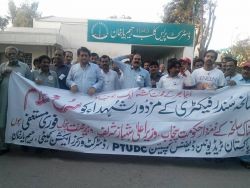 Prime Minister of Pakistan Nawaz Sharif and his younger brother Shahbaz Sharif, who is Chief Minister of Punjab, are also big industrial owners of Pakistan and they themselves have a history of forcing workers to work in precarious conditions in their own factories. In Pakistan there are even alleged cases of factory owners throwing workers in furnaces for demanding better wages and working conditions. In these conditions the labour department is just a tool in the hand of factory management to harass the workers even more.

With plans for privatizing 68 public sector departments under the dictates of IMF, the incumbent government will throw hundreds of thousands more workers into the clutches of these brutal private owners. During this July hundreds of people died in Karachi just because of heat stroke and lack of drinking water. This was the direct result of privatizing Karachi Electric company which couldn’t supply electricity to water turbines at that crucial moment and led to the deaths of those innocents.

PTUDC demands immediate end to privatization and overthrow of this anti labour system. This can only be done through a collective effort of the Pakistani working class.