On the call for anti-privatisation protests by the Postal Action Committee huge protests and demonstrations were held in many cities of Pakistan on 4th January. 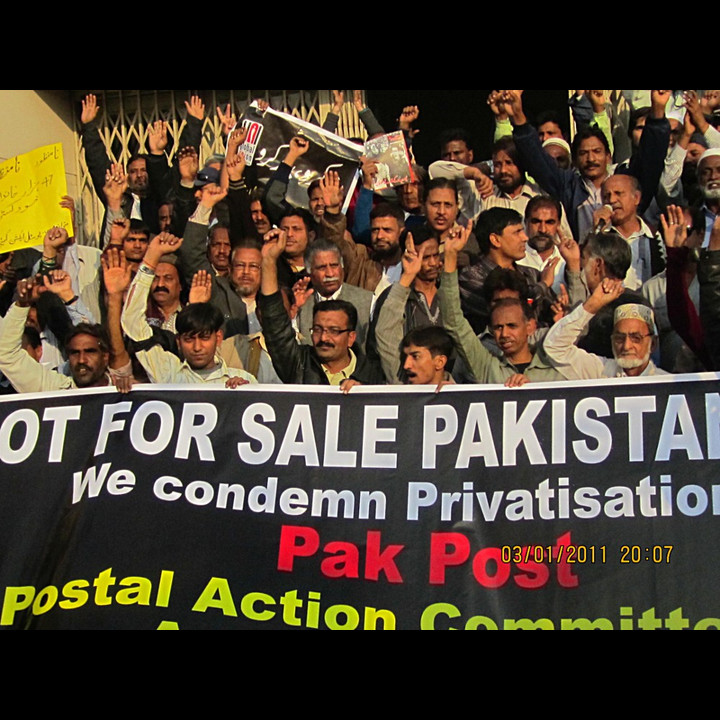 The largest protest was held on the I. I. Chandrigar road in Karachi in which thousands of postal workers participated enthusiastically. Addressing the protest central leaders of the Postal Action Committee, Asad ullah Khan and Qamar Abbas Zaidi said that the privatisation of Pakistan Post is a conspiracy to plunder billions of rupees from this department due to which 47,000 workers’ jobs will be at stake.

47,000 families that depend on these jobs would lose their bread and butter after privatisation. Due to this situation we will save this department from privatization even at the cost of our lives. In 1992 the Post Office department was also given the status of corporation but at that time too the government had to take back its decision after our protests. Today also if the government doesn’t take back its decision we will continue our protests and will take any step that is required. Other labour leaders of Pakistan Post also addressed the demonstration and vowed to stop this privatisation. Comrades of the PTUDC also participated in this protest and distributed paper and leaflets.

Central leader of the NOPE (union of Postal Workers) and central secretary general of the PTUDC, comrade Nazar Mengal also addressed the demonstration. He said that we can see the plight of departments that have already been privatised. From the Karachi Electric Supply Corporation KESC and Telecommunication department thousands of workers have been sacked and their lives are worse than before. He also mentioned the world economic crisis and said that the IMF and World Bank are dictating these policies to every government but if the workers stand united we can avert these imperialist policies.

After that Comrade Zubair Rehman, the Secretary General of PTUDC Sindh, said that privatisation is not only a problem of the postal workers, but in all departments this reactionary policy is being implemented. He said that the PTUDC is making efforts to unite all these struggles into one platform. He said that war against privatisation of Pakistan Post will also be fought in the Steel Mills, Karachi Port Trust, Railways and Pakistan Telecommunications. He promised that the PTUDC will stand with the workers of Pakistan Post. After this huge protest the workers departed peacefully raising slogans of “Down with Privatisation”.

Big Protests were also held in Lahore, Multan, Islamabad and other cities.