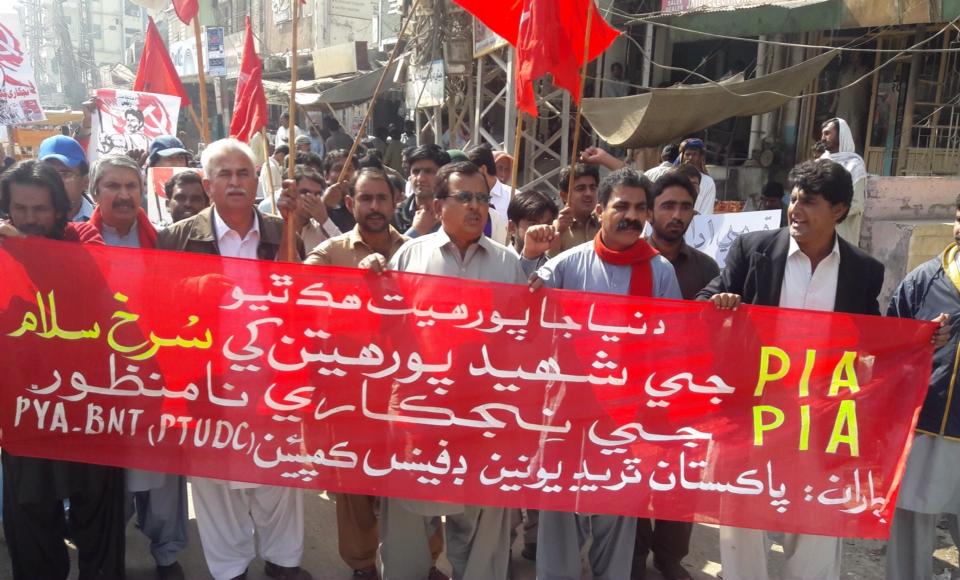 A total strike at Pakistan International Airlines (PIA) started on February 2 nd after state forces opened fire on protesting workers killing at least two. Comrades of the PTUDC [Pakistan Trade Union Defence Campaign] all over the country had been intervening in the movement almost a month earlier with all the forces at their disposal. Here we provide reports of their intervention.

Already before the strike, there were PIA workers in many areas who sympathized with the PTUDC and the Marxists of The Struggle. Below are reports from different regions of the country where there are airports where PIA operates or offices of the airline. 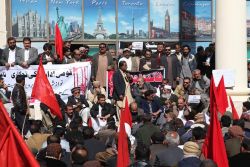 The PIA Join Action Committee (JAC) has been holding protests and rallies at PIA Booking Office and at the airport in Quetta since 2nd February against the proposed privatization of the national flag carrier. Workers from the Pakistan Workers Federation, WAPDA Hydro Union, the Baluchistan Labour Federation and other trade unions and federations are participating in this protest. Comrades from the PTUDC are regularly intervening in the strike with leaflets, magazines, speeches and placards. A large protest was organized in the morning of February 3 rd in front of the Booking Office. The President of the ‘Air League of PIA Employees’, Sher Ali, acted as stage secretary. 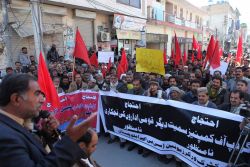 The main speaker was the Central Chairman of the PTUDC comrade Nazar Mengal, together with the Regional President of the Hydro Union, Ramzan Achakzai, the President of the APFAL Federation, Lala Sultan, the Regional President of the Railway Workers Union, Anees Kashmiri, comrade Ali Raza Mongol from the PTUDC and Paramedical Staff Union, Maroof Azad from the Baluchistan Labour Federation and comrade Nadeem Kasi from “Peoples Unity of PIA Employees”. The speakers condemned the policy of privatization and demanded the proposed privatization of PIA be cancelled immediately. The next day large numbers of comrades from the PTUDC intervened in the protests. Comrade Sartaj, Razzaq Ghor Zang, Hassan Jan and Nadeem while addressing the participants of protest said that it is the bureaucracy and the ruling elite who are destroying and bankrupting institutions, that the only way to defeat privatization is the class struggle and unity of workers of all sectors, and called for a general strike to be organised by the leadership. They demanded that all institutions should be run under democratic workers’ control and that the privatisation commission should be dissolved immediately. Such protests, sit-ins, and rallies are still being organized as the strike continues and the PTUDC is participating and intervening with all its forces. 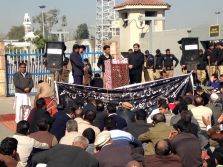 Comrades of the PTUDC have been standing by the protesting workers of PIA for a month now. After the murder of workers on February 2 nd the PTUDC condemned the state forces and demanded the arrest of those involved in this shooting, the dissolution of the privatization commission and a one -day countrywide general strike. Comrades have met many workers sympathetic to the PTUDC and the Marxists with several wishing to join. Representatives of trade unions like the WAPDA Hydro Union, the Municipal Labour Union, the Attock Oil Refinery Employees Union, OGDCL Mazdoor Dost Union, PTCL Workers Federation and State Bank Union are visiting the strike camps and rallies of PIA workers. The joint Secretary of the PTUDC, comrade Changez Malik, along with comrade Asif Rasheed of the Progressive Youth Alliance [PYS], Ishaq Mir, regional general secretary of the PTUDC, and Raja Imran raised concrete demands in their speeches. The comrades are distributing photocopied articles, leaflets and selling their paper as well. 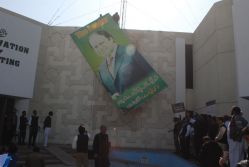 PIA workers have been holding protests at the Booking Office in Multan city and the airport. After the news of the murder of protesting workers in Karachi reached Multan, infuriated workers tore up posters of Nawaz Sharif [the prime minister]. The regional organizer of the PTUDC, comrade Nadeem Pasha and the regional organizer of the PYA Nadir Gopang have put forward the demands of the PTUDC in their speeches. Comrades have distributed photocopied articles on privatization and leaflets in large numbers. Young workers and militant activists have shown a keen interest in the PTUDC and the activity of the Marxists. There are many other sympathizers who have made donations to our fighting fund and have been participating in our public activities. 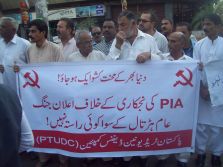 Comrades have been present at protests by PIA workers from the very first day. Many comrades were present at the protest at Jinnah International Airport when workers were fired on by the state forces. During the strike comrades have sold dozens of papers and made contact with many sympathisers. They have distributed photocopied articles and printed leaflets as well. Comrades Janat and Majid represented the PTUDC at the meeting of the Joint Action Committee with other trade unions and federations. Finance Secretary of PTUDC, comrade Majid, delivered a speech in the meeting of all the trade unions to devise a strategy to support the PIA strike. Our comrades raised the demand of a united platform of all trade unions and called for a one -day general strike. The demand was much appreciated by the workers. On February 6th many trade unions, federations and workers’ organization organized a joint protest in which the PTUDC participated with its banner and slogans. Trade Unions from other institutions along with JAC held a joint press conference on February 8 th and comrades are preparing to intervene and put forward their demands. There are several PIA workers here that have shown a keen interest in the PTUDC and the Marxists of The Struggle.

The PTUDC is well known among the workers and trade unions of the city. On 2nd and 3rd February a worker protest was organized in front of the PIA offices in which the Secretary General of the PTUDC, Qamar uz Zaman, the regional organiser of the PTUDC, comrade Haider Chughtai, and comrade Raees Kajjal along with other comrades participated and addressed the workers. The PTUDC organized a protest on February 3rd in front of the Rahim Yar Khan Press Club. Workers and trade union leader from PIA, Coca Cola, Unilever, MLTAP, EWA, ZMC and APCA, along with teachers, clerks, students and journalists, participated in the protest. A group of workers is very sympathetic to the PTUDC and The Struggle. Thirty copies of the PTUDC bulletin, Worker Nama, and five copies of Tabqati Jaddo-jehad ( Class Struggle), the Urdu paper of the Marxists of the IMT have been sold here so far. 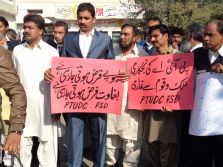 Gohar Muneer, the Regional President of the Air League Employees Union, here is a close sympathizer of the PTUDC and the Marxists. Comrade Umar Rasheed, a leading figure of the IMT in the area, along with other comrades participated in protests and expressed solidarity in their speeches. Fifty copies of the PTUDC bulletin and five copies of Tabqati Jaddo-jehad magazine have been sold so far. A group of close sympathisers in the Air League and People Unity is keenly interested in the dieas of the Marxists.

There were daily visits to Lahore Airport by the PTUDC comrades to express solidarity and intervene in the protest rallies. Leaflets and copies of an article on PIA from the PTUDC bulletin were distributed. Twenty copies of the PTUDC bulletin were sold. Comrades are in discussions with twenty young workers who are interested in the ideas of Marxism. Comrades Rashid Khalid, Adam Pal and Maqsood Hamdani gave speeches in the protest meetings.

Comrade Lal Khan has written two articles in support of the PIA strike in which he proposed a strategy on how to take the struggle of the PIA workers forward. These were published in the largest circulated paper in Pakistan that is published simultaneously from six cities of Pakistan, on 3 and 4,February .. Comrades and PIA strike activists made hundreds of photocopies of these articles and distributed them amongst the workers in Karachi, Multan, Rahimyar Khan, Quetta and Rawalpindi. This article in a paper with about half a million circulation was very well received by the workers as it was the only article in the mainstream media that attacked the regime and supported the strike outrightly. Two veteran trade union leaders from Karachi, Kaneez Fatima of the Karachi shipyard workers and Sheikh Majeed of the PIA phoned Lal Khan and congratulated him for writing this article. The comrades also issued a leaflet, which was printed and distributed all over the country. Comrades are also selling the PTUDC news bulletin, Worker Nama, and the Tabqati Jaddo-jehad magazine. There are many workers who are drawing conclusions from the strike and are looking to the Marxists. 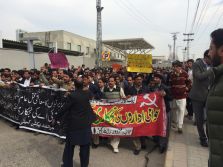 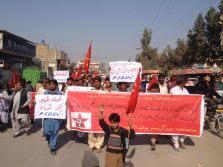