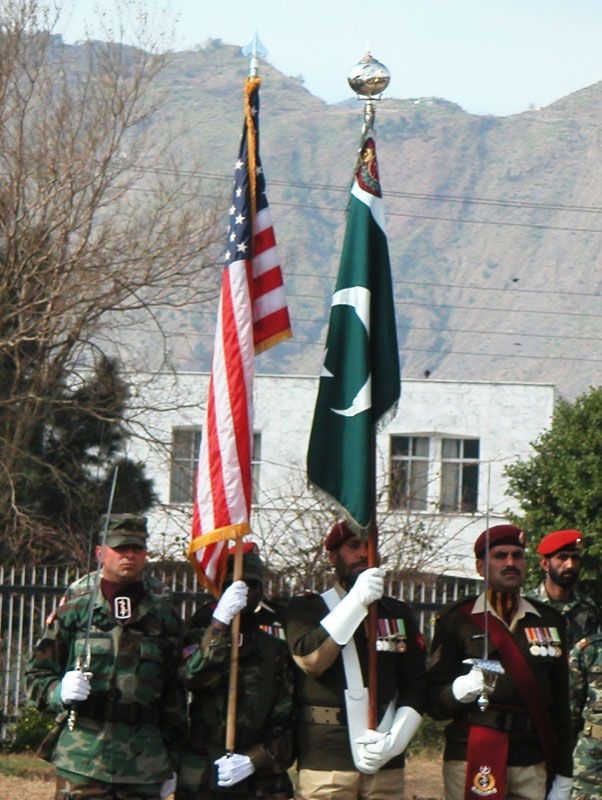 The hoarse bleating and the paranoia unleashed by the media and the intelligentsia in Pakistan complaining about the US operation in Abbotabad as a “breach of sovereignty” is mindboggling to say the least. When did Pakistan ever have genuine and complete sovereignty in its history?

In the sixty four years of its existence the ruling classes have not been able to complete the tasks of the national democratic revolution and not even establish a unified modern nation state. These unfinished tasks have created a society that is economically in permanent crisis, always on the verge of bankruptcy, and that is worsening with every passing day.

The reliance on imperialist aid has been has been a constant feature that is ever increasing and a crushing burden on the already impoverished populace. According to the budget presentation at the Ministry of Finance on Thursday, May 4, some 82 percent of the available national financial resources in the next fiscal year 2011-2012 will be allocated to three sectors: debt servicing, defence and running of civil administration.

Even though these figures are a conservative estimate, they reveal the pathetic state of the economy and the callous nature of our ruling classes towards social development and the plight of the masses. The lust for loot and plunder to enrich themselves while the masses suffer the consequences of this economic disaster is typical of the ruling elites. Military and civilian rulers have alternated in power only to pile up this extortion of national wealth.

However, with the present unprecedented crisis of world capitalism the plight of the working classes has worsened astronomically. Energy and food prices have shot up; healthcare and education have become an unaffordable luxury for the masses. Just to survive is a struggle that the masses have to endure, a situation unforeseen even in the chequered history of this tragic land.

Pakistan which came into being not as a nation state but comprising of different nationalities, the very name of the new country being an acronym of the various regions. The failure of the system has further complicated and bloodied the national contradictions that have now become irresolvable in the incumbent system. Throughout its history its unity has been under constant threat. The breakup of East Bengal was a glaring reminder of the fragile nature of the national cohesion and the farce of its myth of sovereignty. Ever since then the situation has deteriorated and the events in Baluchistan and elsewhere reveal the desperation of the state in trying to forcibly keep the federation intact by resorting to coercion and state terrorism. The infrastructure is rotting and society is constantly besmirched in anarchy, chaos, disillusionment, terrorism, violence and tyranny.

The military dictatorships tried to coerce the people through state repression and when this began to fail, the revolutionary mass upheavals were diverted and distorted through the so called democratic discourse. But the democratic dispensations failed to deliver and now they have plunged society into an abyss of misery, poverty, deprivation and disease. The life of the vast majority of the masses has become a brutalizing agony. The recent revelations that almost half of the electoral lists are fraudulent have exposed the real nature of this democratic facade. The political parties that have emerged under this truncated democratic rulership have no fundamental differences in their social and economic policies. Listening to the speeches of the party leaders and parliamentarians in the assemblies and on the television shows reminds one of Shakespeare’s Hamlet: “Polonius: What do you read my lord? Hamlet: Words, words, words.” (Act II, Scene ii).

Paradoxically with economy in such a calamitous state and the social fabric in tatters, the army chiefs are reluctant to intervene to run the country through direct military rule. But the crisis refuses to spare the state and the military apparatuses and fuels the contradictions that are shaking these institutions.

The recent abduction and killing of Osama bin Laden by the US Navy Seals has further accentuated these conflicts and the army is facing embarrassment and humiliation. The trust deficit between the Americans and Pakistan army has never been greater. Without informing the military’s top brass and jamming the Pakistani radar system while conducting this operation, has exposed the frustration and distrust of the imperialists towards their main allay in this war against terror. CIA director Leon Panetta’s statement that “the Pakistan army was either accomplice or incompetent” in dealing with Osama’s refuge within Abbotabad’s military cantonment area added insult upon injury for the custodians of the ideological and geographical frontiers of this theocratic state.

Shouting about the breach of sovereignty is therefore frivolous. Without economic sovereignty any political sovereignty is a mirage and a farce. The first economic planning commission set up in 1948 comprised a majority of US experts. The subsequent regimes, apart from the Z.A. Bhutto government for a few years in the early 1970’s, slavishly carried out imperialist dictates. Ayub Khan said on 3 January 1966, “Pakistan will be willing if necessary to be a satellite of the US...” Pakistan even supported the Anglo-French invasion of Egypt in October 1956 during the Suez war.

The present preposterous war was started by US imperialism more than three decades ago. Osama bin Laden was recruited to this Jihad by no less than the national security advisor of the US, Zbignew Brzezinski in 1978. The ISI and the Pakistan army were plunged into this war of attrition by General Zia ul Haq at the behest of the Americans. Now the conflicts within the black economy are changing loyalties and friends are turning into foes.

In their extreme deficit of confidence the western imperialist rulers are lurching from one blunder to another. And yet the alliance between the imperialists, the fundamentalists and the Pakistani generals will continue to plod on. That is because in the last analysis their vested interests are based on this capitalist system in its terminal decay. But it will be a fragile, shaky, and deceptive alliance. Conflicts will continue to erupt with even more perilous consequences for the whole region.

The inferno of this conflagration will continue to kill and injure hundreds of thousands of innocent souls in this region. As long as the present socio-economic system remains, the region will continue to sink into barbarism. The very existence of culture and civilization is being threatened by this imperialist madness and fundamentalist bestiality. It may seem to be a momentous task, but without a socialist transformation the survival of humanity will be seriously compromised.