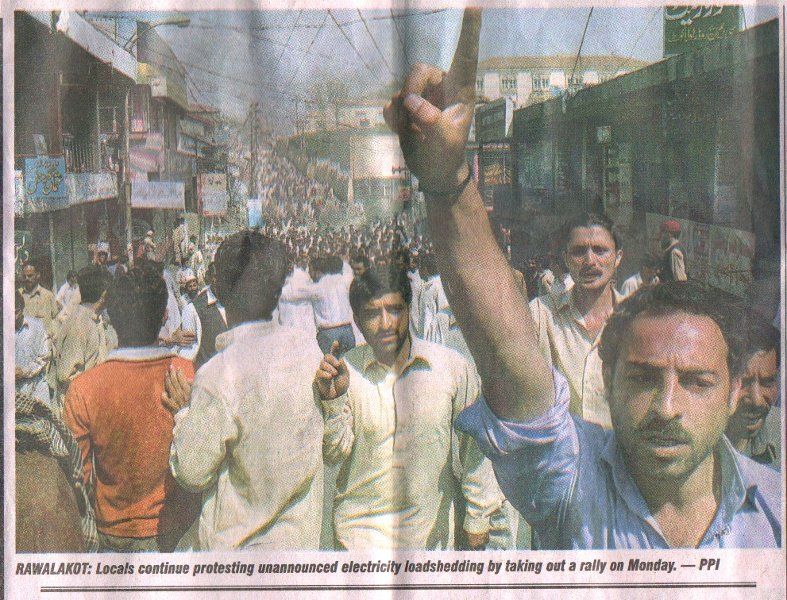 Protests against power cuts and price hikes are continuing in Pakistan. Here we have a report from Rawlakot where thousands came out on the streets and were faced with the police firing live ammunition on the crowds, injuring several, among them Marxists from the Jammu Kashmir National Students Federation, JKNSF.

On 28th March on the call of the traders’ association for a “shutter down” strike in Rawlakot against power cuts which have reached up to 20 hours daily, nearly 10 to 15 thousand people came out on the streets at 10am. There was a complete wheel jam and a “shutter down” and all the city was brought to a standstill.

When the demonstration reached Baldia Stand, the police started firing tear gas and baton charged the protestors but the people kept on moving until the police opened fire on the demonstration. Nearly 15 people were injured out which 5 are seriously injured and are being treated in hospitals in Rawalpindi. Nearly 20 people were arrested. However, the protestors stood firm against this barbaric repression and remained on the streets till 7pm.

Marxists from the Jammu Kashmir National Students Federation, JKNSF, which is the largest student federation of Pakistani-occupied Kashmir, played a leading role in this demonstration. Hundreds of Marxists from the JKNSF were present in this demonstration and leading it with their revolutionary slogans. They raised slogans against the oligarchy of the capitalists and the ruling class which is responsible for the price hikes. They also raised slogans which said that only socialist revolution can end this misery. They got a resounding response from the people in the demonstration for their slogans.

With their revolutionary slogans the whole demonstration became more militant and advanced, in spite of the obstacles created by the police. Faced with the angry mood of the people, the police opened fire, as a result of which the first victim was comrade Wajid who got a bullet on his leg. Comrade Wajid is a member of Central Committee of the JKNSF.

After this incident, on the call of comrade Amjad Shahswar, president of the JKNSF, a committee was formed to organise these demonstrations. This committee comprised of members from different student federations, traders’ association, trade unions and political parties. This committee resolved to continue the protests in Rawlakot and other cities of Kashmir.

On the call of this committee demonstrations were held against power cuts on 29th March in Rawlakot, Thorar, Khai Gala, Chota Gala and many other cities. The committee has put forward the following demands:

Negotiations between the committee and the administration have failed and protests continue all over Pakistani-occupied Kashmir.