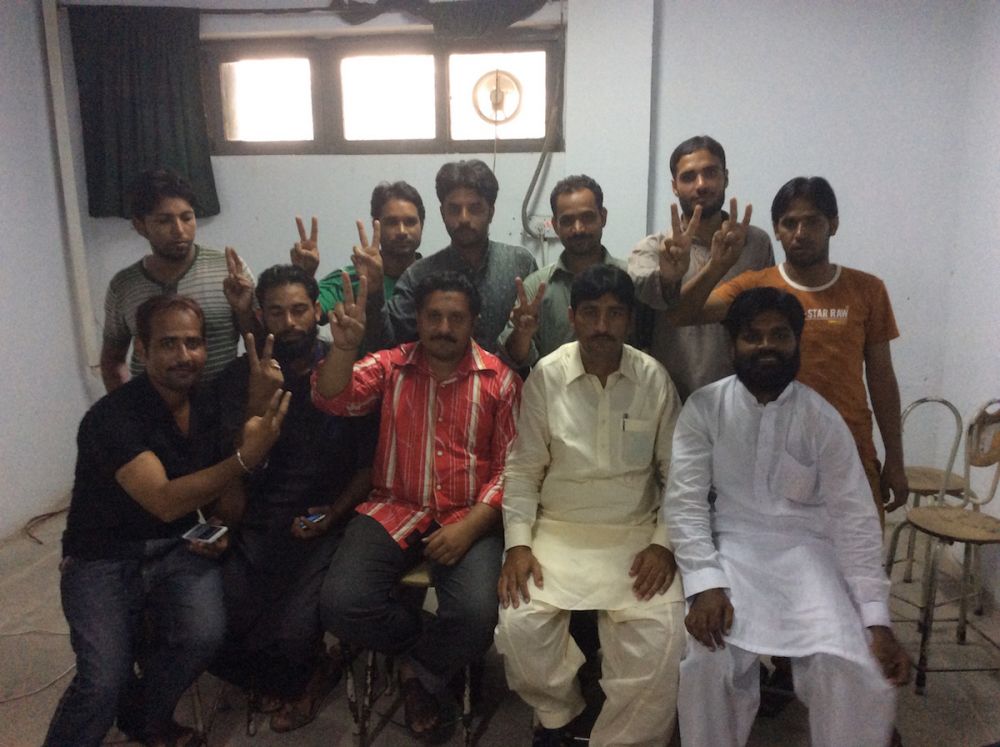 A three-day strike by workers of the Forward Gear in Sialkot, Punjab has ended in victory as they have won their demands. The workers have won around 15% increment in their salaries, all sacked workers reinstated, and management has accepted their union Forward Gear Workers’ Union CBA as the true representative of workers in the company. During the three days of the strike hundreds of workers took part and achieved a total work stoppage. This is an important victory for workers in the Pakistani trade union movement and important lessons can be drawn from it.

Forward Group Pvt Ltd. is a famous sports manufacturer group in Sialkot, Pakistan. It consists of two units: Forward Sports and Forward Gear. It reached international fame by producing the Adidas soccer balls for the FIFA World Cup 2014 in Brazil. International media like CNN and the BBC ran special documentaries highlighting the quality products produced by the group. In addition, Forward Gear produces different types of Adidas bags to be used in international sports events. The group received best export award and praise from international sports bodies as well as a European Union award for quality manufacturing. However, this quality comes from extreme exploitation of workers who are living in difficult conditions of hand-to-mouth subsistence. 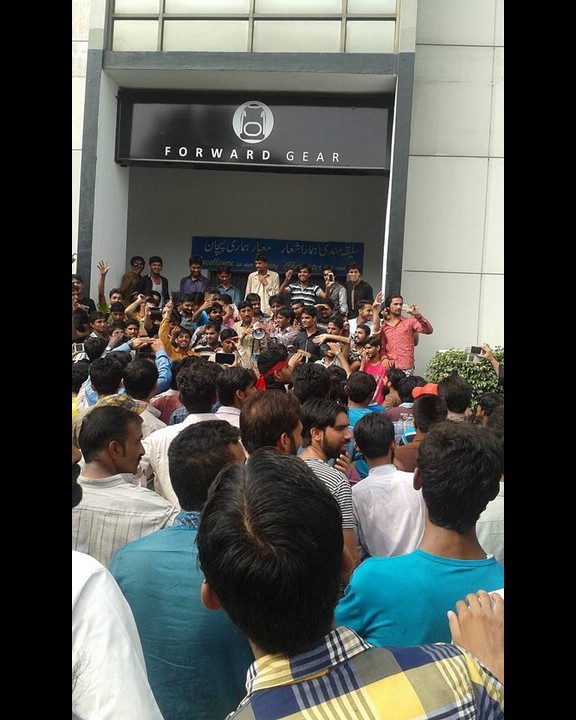 Forward Gear now earns billions of rupees but its workers are being paid pennies. Each worker produces on average 400 bags per month; the price of a bag on the international market is around 300 Euros but workers are being paid less than 125 euro monthly. There was not even the concept of permanent employment and other workers’ rights. Workers were forced to work under a brutal contract system and in spite of working for the company they were not “officially” employed by company. No leave was given to workers and even during work hours washroom timings were noted down and salary was deducted. 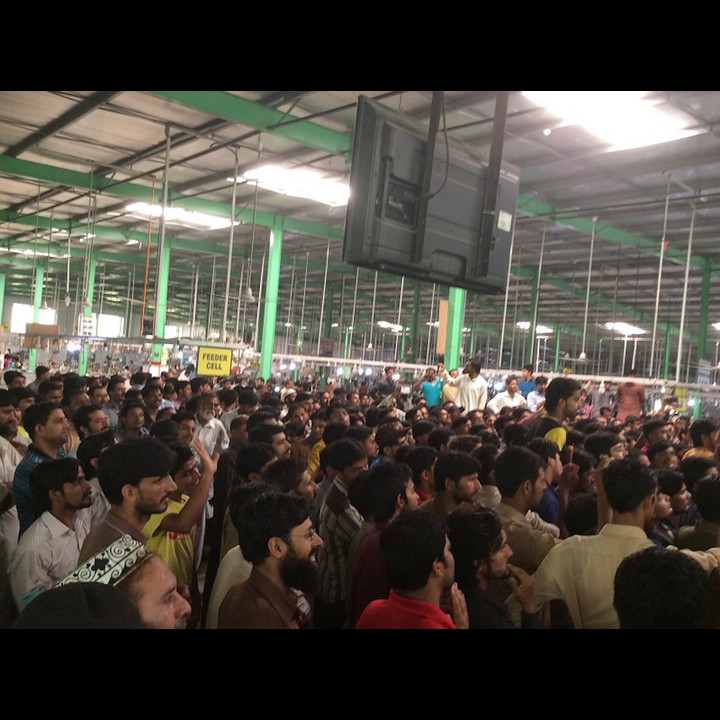 In June 2015, Forward Gear Workers’ Union put forward a Charter of Demands for the new financial year to management through official channels. Rather than having a dialogue with union about the Charter of Demands, Management used worst kind of actions against Union leaders and workers. In this regard fake cases were registered in the local police station against union leaders. 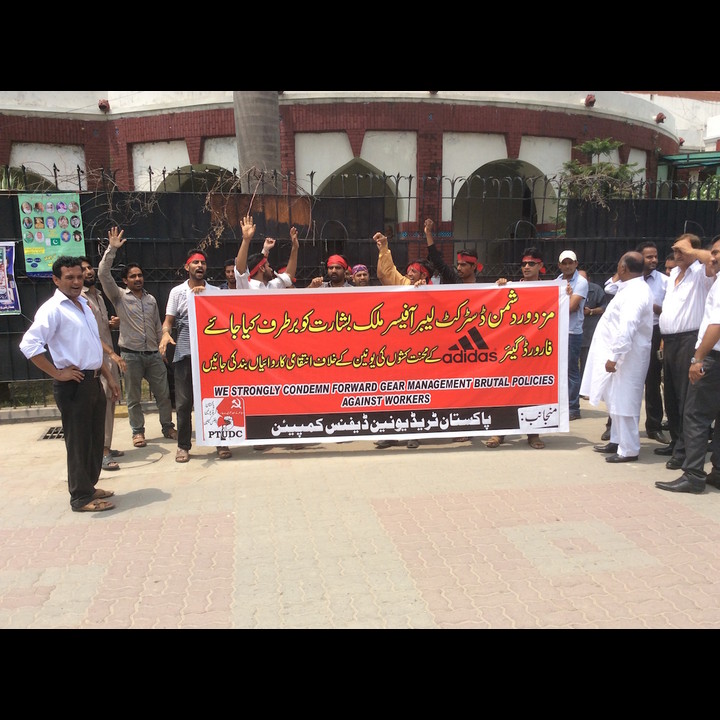 Factory management, under strict directions from Owner and CEO Khawaja Masood, started to crush union. They started giving cash bonuses to workers to refrain from union activity and effectively turned the workplace into a high security prison. Iron gates were deployed in production halls; workers were locked inside a cage while working. Occupational safety was compromised and the company deployed high-tech gadgets and CCTV cameras to spy on workers. Armed security guards were roaming inside halls to check on the workers; workers were being divided and crushed.

District Labour Officer Malik Basharat played the role of obedient servant to management. On 30th July he registered a new pocket union based upon fake membership and issued a letter of CBA (Collective Bargain Agent) to new the pocket union Masoon Itehad Union. Moreover he cancelled the registration of the workers’ union. 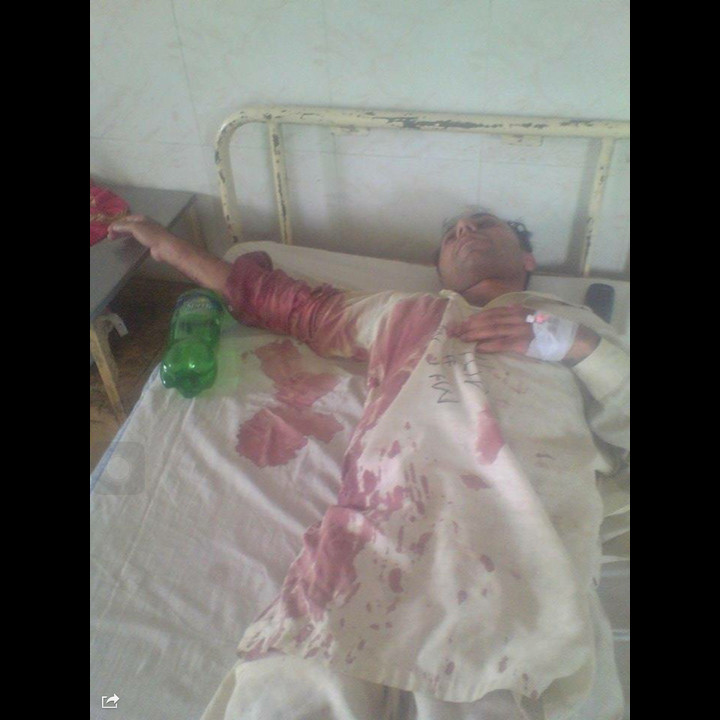 Using this golden opportunity, Forward Gear factory management started physically harassing workers. On the morning of 4th August at around 8:20 when workers began their work, factory-hired goons attacked one worker, Hafiz Shamas Tabraiz. A union leader tried to calm the situation but he was attacked by HR manager, (retired) Colonel Masood Sadiq. Workers took Shamas to a nearby hospital, where he was referred to the District HQ Hospital as he was severely injured.

This incident worked as a spark: within minutes workers stopped working and began to protest against management. The workers of other halls also joined them and this spark became fire that spread to all factory. Forward Gear Workers’ Union President Ali Butt announced a complete strike until demands were met. Workers blocked all the gates and took control of factory. The management disappeared and everywhere slogans, discussions and picket lines were formed. This continued for two days then on third day of strike all of Forward Group units observed strike. Workers from adjoining factories like Leather field and Star Pak also joined Forward workers and announced a complete strike if demands were not met. Frightened, management rushed to local police to rescue them from this situation and registered a fake case of dacoit, riots and theft committed by the workers. On the third day, workers aggressively put forward their demands, and announced that they intended to paralyze the whole of Sialkot city. PTUDC comrades actively participated, gave them a clear political line and also addressed the workers. PTUDC Sialkot chapter also organized a solidarity protest in front of DCO Office (District Government) Sialkot against District Labour Officer and for demands of workers. 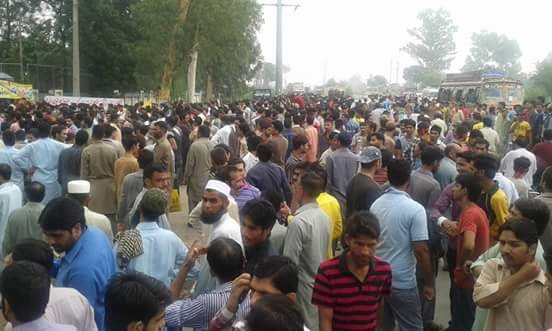 Under pressure from the strike spreading to other factories and the strengthening of workers power, district management rushed in to handle the situation. The District Police Officer (head of police) and the District Coordination Officer (head of administration) called for reconciliation between workers and management. Management not only accepted the demands but promised to refrain from further attacks on workers. District administration immediately suspended District Labour Officer Malik Basharat and Station House Officer Airport Police Station Sambrial Mushtaq Cheema. Workers thanked the PTUDC for their support and vowed to fight against any further attacks. PTUDC comrades Umar Shahid, Nasir Butt, Babar Patras and Umair Ali from the Progressive Youth Alliance, while congratulating workers on their victory said:

“This is victory due to your unity. This is just a battle in class war against this cruel capitalist system. There is no emancipation of workers under capitalism hence we must struggle for socialism.”

Forward Gear Workers Union President Ali Butt, Gen Secretary Mushtaq Shehzad said that we will continue our struggle and this process of unionizing will spread to other factories as well.

Workers of the World Unite !