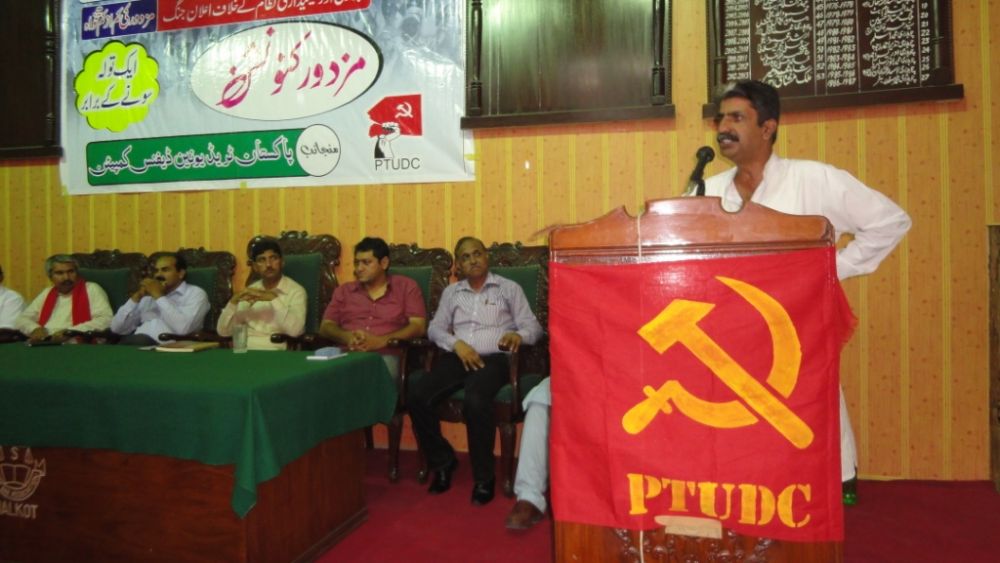 The PTUDC organized a historic labour convention in the industrial city of Sialkot on Sunday the 13 of September. Sialkot is famous for exporting sports goods and surgical instruments to all over the world. Footballs used in the world cup and other important events are manufactured here by the poor, skilled labourers of Sialkot who work under very difficult conditions.

The main slogans at the convention were to end the privatization policy of the government and to demand an increase in the minimum wage to become equal to 10 grams of gold. A large number of workers attended from the electricity department WAPDA Hydro Union, GEPCO & GEPCO Meter readers Association, Sui Gas, the Post Office, Coca Cola, Sialkot Dry Port Trust, Pakhtoon Labour Front Sialkot, Anwar Khawaja Industries, Forward Gear, Leather field and others from Sialkot surgical & sports industry.

Speaking on this occasion all of the labour leaders said that the Pakistani State has collapsed in terms of delivering anything to ordinary people. On the dictates of Imperialist financial institutions it is implementing the worst kind of policies for the working class and they are going to privatize all public assets to put them into the hands of the capitalists. They said that if workers are united then the ruling class cannot do such things and we can defeat them.

In his address, the chief guest Qamar uz Zaman Khan said that Forward Gear workers have proved that the working class can win if our labour leaders stand on firm principles. They have put forward an example for the whole of the Pakistani working class that must be learned and followed. The ruling class has been attacking the working class relentlessly while corrupt trade union leaders are helping the ruling class in its exploitation. They share equal responsibility for the attacks on working class because of this. The central leadership of WAPDA Hydro Union is hesitating to call workers for a decisive action against privatization and is betraying the movement. It will be completely wrong to blame the workers for not resisting. WAPDA Workers have A tremendous tradition of class struggle. In 1969 the workers of the electricity department forced General Ayub Khan to step down. It is now time to take the same action again.

Comrade Adam Pal said in his speech that the recent incident of a factory fire that killed 18 workers in Gakkhar shows once again the complete bankruptcy of the Pakistani state which cannot even implement those labour laws which they have made themselves. He also mentioned the recent general strike in India of 150 million strong militant Indian workers which has shown that the working class is alive and can rewrite history. Indian workers put aside all difference on religious, nationalist, linguistic, caste and other lines and forged a unity on class lines. The Pakistani working class has to follow the example put forward by them. He also said that the judiciary, labour department, media and parliament are tools of the ruling class and state that are used by the capitalists to suppress the workers movement. The working class can only get its rights by struggle and uniting the workers of all sectors on one platform.

Muhammad Ali Butt said in his speech that the Forward workers stand with all workers in their struggle for their rights. We oppose privatization and we will stand with the workers of WAPDA, PIA and Railway in their struggle against privatization. If workers in government departments want to see the plight of workers in the private sector then they are welcome to visit our factory, where we make footballs up to international standards. He said that in the private sector workers are mostly working for 12 hours daily and are paid on average around Rs. 7000 ($70) per month. This meagre wage is not enough for the survival of a single individual but workers have to feed their families on this amount also. He said that we thank the PTUDC for their support in our struggle against management, Police, the labour department and district government. He also thanked all participants who attended this labour convention.

A resolution was unanimously passed with the following demands:

At the end of the convention a rally was organized from the District Bar Hall to the DCO Office Chowk where participants chanted slogans against privatization and in favour of our demands. 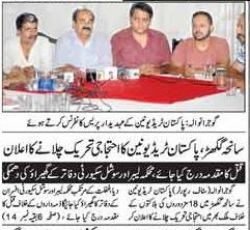 On Sunday the 13 of September, at around 5 PM, the PTUDC leadership held a press conference at Lords Hotel Gujranwala.  This included the Central General Secretary, Qamar uz Zaman Khan, the Secretary of South Asia, Adam Pal, Joint Secretary, Changaiz Malik, and the leader of YDA Punjab, Dr. Valeed Khan. Comrade Sibghat Wyne, Comrade Muhammad Ibne Sana and others from Gujranwala were also in attendance. A large number of media representatives were present on this occasion.

The PTUDC leadership explained the causes of the factory fire incident, which resulted in the death of 18 workers, while 25 are still in critical condition in hospital. They said that workers had reported the poor condition of the boiler to the owner many times but he never showed any concern. They said that the owner is a leader of the ruling PML(N) in the district and he will get away with these murders without any punishment. The Labour department and other concerned authorities of government are also responsible for not performing their duties and for taking bribes to ignore this malpractice. They said that workers were not unionized and were not given wages and the safety which should exist according to the law. They said that the Chief Minister himself is responsible for ignoring the plight of the workers.

They demanded a fair trial of the owners on charges of murder and that compensation of Rs. 5 million should be paid to the family of every deceased worker. They said that PTUDC will hold protests against the government and factory owners responsible for this incident, if these demands are not met.