Details
our correspondent in Lahore
19 March 2010 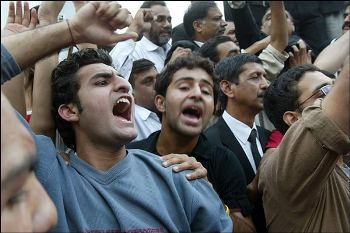 The latest news coming in from Pakistan indicates how tense the situation has become. Spontaneous protest rallies broke out yesterday, continuing today, sparked off by increased transport costs, but also against the long power cuts the people have to endure. The police have responded in some cases by firing on the protestors.

The 29th Congress of The Struggle is meeting in an economic, social and political crisis without parallel in the history of Pakistan. The economic collapse is causing widespread misery among the masses. 20,000 people are falling into poverty every day. To the scourge of unemployment is added the constant increase in prices of basic necessities and the daily electricity cuts that plunge cities, towns and villages into darkness sometimes for ten hours or more.

The situation in Pakistan is reaching a critical point. Unemployment, price rises, poverty and desperation have reached record levels, while terrorism, bomb blasts and sectarian strife are rampant. To make things still worse, the energy crisis has plunged much of the country into darkness. The so-called loadshedding has meant power cuts of 16 hours in urban areas of the city while 18 to 20 hours of power cuts is being recorded in rural areas. Besides, industrial areas are observing 8-hour loadshedding on a daily basis, which has forced workers to come out onto the streets.

One well-known journalist wrote recently that we should be prepared to put up with power cuts because we have democracy. How hollow such words sound to millions of Pakistanis who are struggling to survive! The election of the PPP government has made little or no difference as far as the masses are concerned. Under the right-wing leadership of Zardari the government has carried out a policy of cuts and privatization and subordinated the country to US imperialism, participating in the criminal war in Afghanistan that has brought further death, devastation and misery.

Yesterday, Thursday, March 18, the anger of the people finally boiled over. The immediate cause was a bus fare increase, which led to an explosion of protest on the streets of the capital Islamabad. The protests have continued all day today (Friday). Angry demonstrators clashed with police who fired rubber bullets and also shot live rounds at the crowd, injuring several.

The protests started when students and residents blocked a key road in Islamabad's Bara Kahu neighborhood, to protest the 20 per cent increase in bus fares. Students of various colleges of the twin cities of Rawalpindi and Islamabad, living in Bhara Kahu and its adjoining areas, told journalists they had planned a peaceful protest against increases in transport fares, as their parents were unable to give them Rs100 daily to get to school.

The students blocked the main Murree road to register their protest and demanded a review of the fare list. When a group of protesters intercepted some public service vehicles (PSVs), their drivers and conductors started arguing with students, which resulted in fighting.

The situation finally exploded when police used tear gas in an attempt to stop the protests, but without success. The demonstrators replied with a hail of stones, injuring some policemen. The angry protesters started pelting wagons and buses with stones and broke windowpanes of dozens of public service vehicles. The students stopped a number of public service vehicles and snatched keys from their drivers.

The local police called in extra forces and tried to clear the road with baton-charges and hurled teargas on the orders of the ADC (G). When this failed, they resorted to firing rubber bullets and also live rounds. As a result, 21-year-old Mehfeez, son of Abdur Rashid, a first-year student of the Islamabad College, Shamsabad, received a bullet in his chest. He was rushed to the Pakistan Institute of Medical Sciences (PIMS) in a critical condition.

Shahzad Town Circle SDP, Farhat Kazmi was wounded along with seven police personnel during stone throwing. According to press reports, some protestors attempted to seize the police weapons. The protest, which started at about 12.30pm, continued till late evening. Police arrested dozens of protesters but most of them were released on the orders of the deputy commissioner. Traffic between Murree-Azad Kashmir and Rawalpindi-Islamabad remained blocked for more than six hours.

Alarmed by the violence, the government moved quickly to rescind the fare increase late Thursday, but the protests continued today (Friday, March 19) with students demanding the release of protesters arrested the day before. On Friday morning rock-throwing protesters blocked a main road to Islamabad's airport. Protesters said more than a dozen students were in police custody.

Television news footage today showed students throwing stones at police officers, who were using tear gas and batons, and firing shotguns and pistols into the air, although TV coverage showed some policemen firing straight into the crowd. A young boy was seriously wounded and 21 others were also injured.

Unable to halt the protest, Rawalpindi police were called in as Islamabad police ran short of tear gas shells. A vehicle of the UN inspection team investigating the murder of Benazir Bhutto was also attacked by the demonstrators. The UN team returned to the airport in Islamabad after the attack and requested for security from the United States' embassy.

The sheer ferocity of the uprising took the PPP government aback. Following orders from Prime Minister Syed Yousuf Raza Gilani, Interior Minister Rehman Malik has ordered an inquiry into the incident and appointed the deputy commissioner to submit a report within 72 hours.

Deputy Commissioner (of Islamabad) Amir Ali Ahmad said the administrative officers would be punished according to the law if they were found guilty of provoking the students. He said he would complete the inquiry within two days to “ascertain the facts”. But today (Friday) the situation remained tense till late evening and the protesting groups continued attacking police from different sides. The Deputy Commissioner added that all issues had been settled, but that some people were creating a law and order problem. He said the chief commissioner has cancelled the fare list and ordered its revision.

However, the burning discontent is spreading throughout the country. In Faisalabad enraged workers have staged protest demonstrations, burning tyres, against the prolonged power cuts, while traders have organized token hunger strikes against the price hikes and loadshedding of electricity and gas. In areas such as Mulltan small traders and peasants have also staged protests. Yesterday it was the turn of Bahawalpur, where hundreds of traders, small farmers and students staged a demonstration against 16-18 hours of unscheduled loadshedding, blocking the main highway.

The mood is becoming explosive, and resembles the situation in the build up to the 1968 revolutionary uprising. The patience of the people has its limits, and these limits are fast being reached.

See pictures at the website of Dawn: Thursday and Friday.