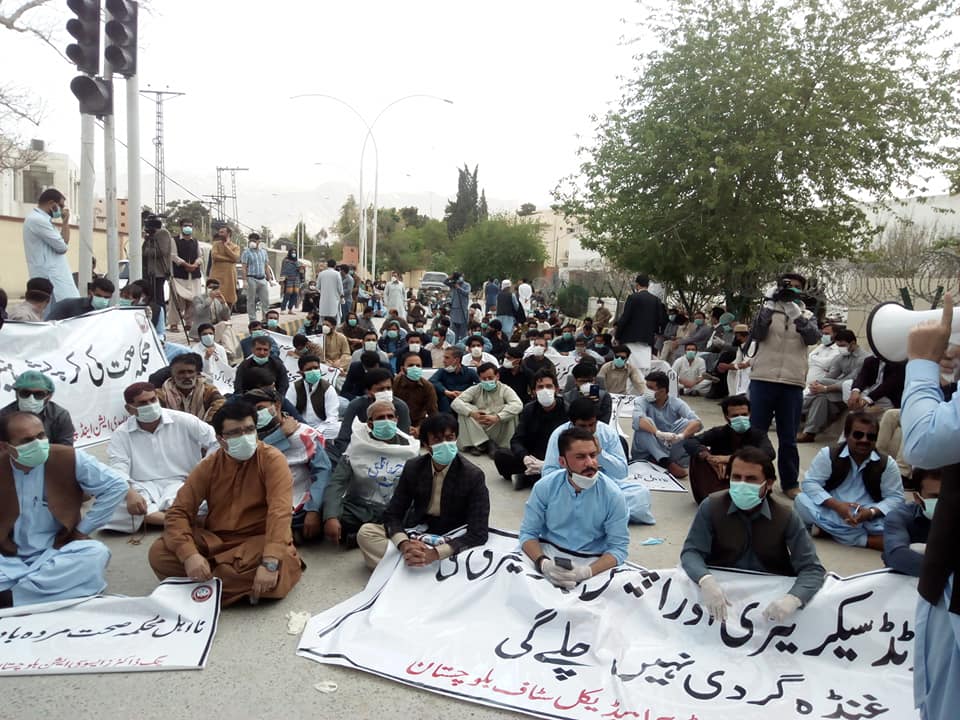 Today, dozens of health workers were tortured and arrested in Quetta, Pakistan while they were protesting for the provision of personal protective equipment outside the office of the Chief Minister of Balochistan Province in Pakistan.

The Young Doctors’ Association of Balochistan, along with the Nurses’ Association and the Hospital Workers’ Association, had been demanding the provision of protective equipment for many days but the government was not responding to their demands. These health workers were providing health services in government hospitals without any equipment. Many of them contracted the coronavirus because of this and at least 13 have tested positive so far. A dozen others are waiting for their test results.

Three days ago, they held a joint press conference in which they gave the government 48 hours to provide protective equipment. If this demand wasn’t met, the health workers stated, they would hold a protest against the government. No one gave any heed to their demands. For this reason, they started their protest this morning in front of the Chief Minister’s office, risking their lives due to the COVID-19 pandemic. Instead of listening to their complaints, the government met them with savage repression. They were brutally beaten by the police, taken into custody and shifted to different police stations in Quetta.

According to our most recent information, dozens of health workers were still in custody, along with the leaders of the Young Doctors Association, Paramedics Association, and the organiser of RWF Balochistan, Comrade Karim Parhar. Comrade Karim Parhar also shared a video on Facebook, showing him inside a police van, being taken to the police station together with many other health workers. In the video, all the arrested health workers are seen raising their demands. They showed complete resolve, determination to fight for their rights and to save not only their own, but also their patients’ lives.

The situation in Pakistan’s other provinces and cities is no different. From day one, health workers organised in the Grand Health Alliance have been demanding protective equipment from the government. However, the pandemic has been allowed to ravage the country for several weeks, and they have not received any of this lifesaving gear. Even ordinary facemasks are not available to these health workers. In many places, they are forced to use plastic bags and other such material to protect their personal safety. Dozens of health workers around the country have contracted COVID-19, with a few having already died. One of those is a 27-year old doctor, Osama Riaz from Gilgit in Baltistan, who was screening COVID-19 patients there. Many other doctors, female nurses and hospital workers have tested positive due to the lack of protective equipment.

The Grand Health Alliance’s leaders have held various press conferences and raised their voices in many TV shows, as well as on social media, putting forward these demands. The government steadfastly refuses to listen. This puts in stark relief the callousness and inhuman nature of the ruling class here. Instead of providing health workers with proper PPE, the government announced that those who die in this fight would be labeled as martyrs and asked the security forces to present health workers with a salute of honor. But health workers publicly condemned this action, saying they didn't want to become martyrs; instead, they want to continue fulfilling their duties in this critical situation.

Already, Pakistan’s ratio of health workers to the population as a whole is one of the worst in the world. Pakistan spends less than two percent of its GDP on healthcare and there is only one doctor available for every 1,500 people, and only one hospital bed for every 2,000 people. There are many fewer nurses than doctors. Every year, around half a million children die from treatable diseases like malaria, pneumonia and dysentery in Pakistan. In the same time period, more than 100,000 women die during childbirth. More than 45 percent of children are malnourished, causing their growth to be stunted.

In a country of 220 million, only 22 big teaching hospitals are available for the masses, while there are 950 poorly maintained and ill equipped secondary hospitals and 6,000 basic health units that only provide basic services, though only on paper most of the time. In reality, the situation is much worse, with hospitals understaffed and without any resources to treat the thousands of patients coming in every day. When this pandemic started spreading in Pakistan in late February, the government in Pakistan didn't take it seriously and gave permission to various congregations, including religious gatherings of thousands of people in various cities, due to which the virus spread across the country. Also, the government carried out the privatisation of hospitals in the first week of March, while health workers were busy screening COVID-19 patients. So far the government has reported only 52 deaths due to coronavirus but this is a huge understatement. Various other sources report a higher rate of deaths, while testing facilities are not widely available. According to a report by The Independent Urdu, expired testing kits are also being used by the government, which has put a question mark over all testing being carried out in the country. This shows the bleak picture of health services in the entire country, which is already at the 154th position in health facilities among the countries of the world according to the World Health Organization. Simultaneously, Pakistan was the 11th-largest buyer of sophisticated weapons in the world in 2019 and spends around 50 percent of its annual budget on debt servicing, as well as more than 25 percent on defence. Annually, four percent of the GDP is spent directly on defence, along with large amounts indirectly.

In this situation, the coronavirus pandemic has brought the country to the verge of a catastrophe, where thousands of people can die while the ruling class continues to shift its wealth in safe havens outside the country. The policies of the government are to brutally crush any kind of dissent and use all its power to silence the working class, who are coming out to defend their rightful demands. Also, to fight the coronavirus pandemic the government has announced tax breaks and subsidies worth billions of rupees for the rich in the country, while the poor continue to die of hunger and disease and millions starve in miserable living conditions.

The fight for health!

The Red Workers’ Front is at the forefront of the struggle against these measures and is in close coordination with the Grand Health Alliance in all provinces to put pressure on the government to provide protective equipment. The RWF has initiated the campaign, not only amongst health workers, but has taken it to other sectors of the working class to forge unity among the workers in this catastrophic situation. Millions of workers have been thrown out of their jobs due to the lockdown and many more have to survive this lockdown without wages or support from the government. In many cities food riots have already started, in which people have come out of their localities in their hundreds to protest on empty roads for basic food items. Some protests have turned violent and have led to the plundering of nearby food resources.

The Red Workers’ Front is demanding that the government provide basic food items to all working-class people, waive their electricity and other utility bills and order a rent freeze in the entire country. To provide these resources, the government should expropriate the rich and save thousands of people from dying of hunger and disease. But the ruling class of the country is too busy with its dirty politics and is using every means to safeguard their own vested interests, while unleashing chaos on the masses and throwing them to a miserable death due to hunger and disease.

The Red Workers’ Front is trying to organise the working class in this catastrophic situation through online meetings and campaigns on the ground. A large number of workers are sending video messages explaining their plight and demanding basic safety equipment from the government. These video messages are being published on the RWF Facebook page and getting widespread support. So far, workers from the electricity department, telecommunications, education, irrigation and other departments have sent their video messages in solidarity with the health workers and also explaining their own plight in these conditions. Industrial workers from Colgate toothpaste, textiles, coal mines, construction, the auto industry and other sectors have also sent their messages and have stressed the need of a united struggle against the vicious ruling class of Pakistan. The RWF has also organised online meetings of electricity workers and in various other sectors to discuss these issues.

In the coming months, the death toll is expected to rise due to the coronavirus pandemic, along with the struggle of the masses against the ruling class, in which Red Workers’ Front will try to bring all sections of the working class on one platform to fight against this mass murder of the workers.

The struggle of health workers for protective equipment is part of the struggle of the working class to snatch its right to life from the jaws of death, which has been imposed by the bloodthirsty rulers not only in Pakistan but in the whole world. It is now the duty of the workers of the world to fight against this draconian capitalist system, which has brought this misery to the human race on the whole planet. Only a united action of the workers of the world and their solidarity can bring back life, happiness and prosperity on the planet by overthrowing the rule of Capital.