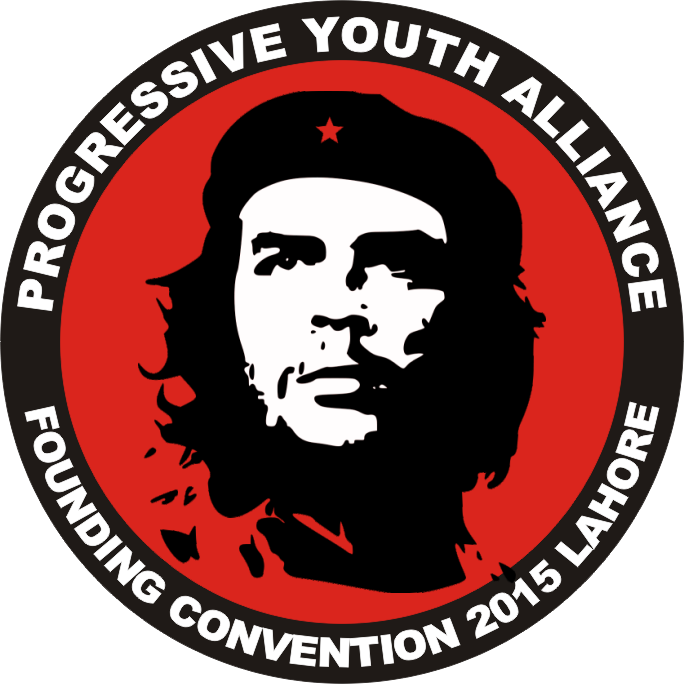 The Progressive Youth Alliance (PYA) is holding its founding convention on Saturday, December 5th in Lahore. This will be an immense step forward towards the revival of left student politics, which has been in steep decline for almost three decades now. It is worth mentioning that students unions are banned in the country since 1983 and no “democratic” regime has reversed this brutal relic of Zia’s draconian regime.

Thousands of youth and students are actively involved in the preparations for the convention across the country. In every major city membership camps, meetings, seminars, and regional conventions are being organized. Local chapters and units of PYA are being formed at institutional and district level. These structures are to be expanded to provincial level as the membership targets are met. A massive mobilization of youth and students is gaining momentum gradually as the date of the convention approaches.

The convention is being held in the background of deepening socioeconomic crisis in Pakistan and internationally. The right-wing PML (N) regime are carrying out drastic cuts to education and health. Historic institutions like Murray College (Sialkot) and Gordon College (Rawalpindi) are being privatized. On response, students and teachers of these institutions have organized mass protests during last few weeks. But these campaigns are isolated and lack leadership with a solid strategy and revolutionary ideology. The literacy rate of the country has further declined 2% percent last year, officially down from 59 to 57 percent. Unemployment is rising sharply with two million youth entering job market each year. The minister for planning conceded that at least 7% GDP growth rate is required to create any new jobs. But in spite of all the fudging of the official figures, the current growth rate is hovering around 3%. Almost sixty state owned enterprises in services and industry (including power sector and airlines) have been listed for privatization under the dictates of the IMF. If this privatization proceeds as planned, the massive downsizing which will ensue will further add to the already gigantic army of the unemployed. Brutal national oppression and along with class exploitation has intensified. In such dire conditions no political party is addressing the burning issues of students and youth. A huge vacuum has opened up for the left in society.  There is an urgent need to organize, educate and mobilize millions of youth on the basis of revolutionary ideas and build a formidable left alternative for the workers and the youth. 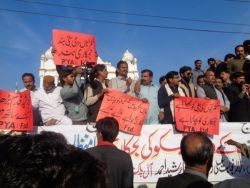 In the present unfavorable objective conditions in Pakistan, our comrades launched the PYA back in 2011. ‘Progressive Youth Alliance’ is neither a student union nor a federation. Its main objective is to unite progressive students unions, groups, societies, individuals and other political currents within the youth on single platform for a united struggle against the commercialization of education, unemployment, state oppression and Islamic fundamentalism. The main demands include a tenfold increase in education budget, the lifting of the ban on student unions, an unemployment allowance of Rs. 15000, the separation of state from religion, the right of self-determination for oppressed nationalities, equal rights and status for women at every level, the nationalization of all educational institutions and free education for all.  The ongoing campaign for holding this convention is being organized around these demands and is attracting vast layers of youth. 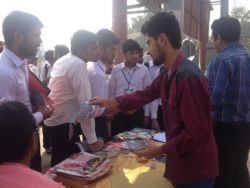 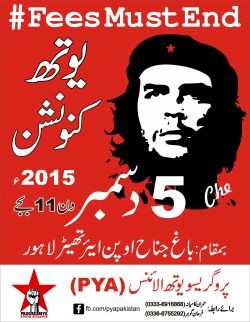 The main strategy of the campaign is to organize registration camps in order to distribute leaflets, initiate political discussions and register those who agree to our basic program as members. Around fifty thousand leaflets, stickers, posters and invitation cards have been printed and distributed so far. Dozens of such camps have been organized in Karachi, Hyderabad, Dadu, Multan, Bahawalpur, Rahim Yar Khan, Lahore, Faisalabad, Rawalpindi, Wah, Buner, Malakand, and Kashmir. Camps are usually held in front of important universities and colleges or places of historic gatherings of youth and students. Each camp is followed by meeting(s) with the initial contacts and basic organizational units are formed wherever possible. Weekly or fortnightly study circles are also initiated for the political and ideological education of the new members. Movie sessions are also occasionally organized. At places where camps are not possible due to various reasons (including state oppression) we have been carrying out the distribution of leaflets on a mass scale. The comrades of Baluchistan have adopted this strategy. 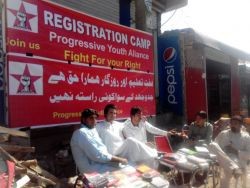 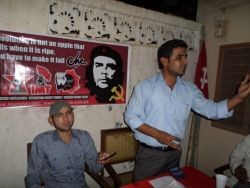 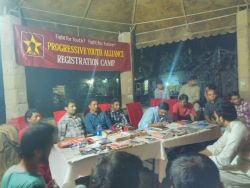 FaisalabadAlongside these camps, meetings with progressive student organizations are being held. Jammu Kashmir National Students Federation (JKNSF) and Balouch Students Organization (Pajjar) have already agreed to join the Alliance officially and attend the convention with as much strength as possible. Many local groups and notable individuals from some other organizations/societies have fully agreed to the program and demands of PYA and are attending meetings and seminars as sympathizers. Such groups and individuals will be attending the PYA founding convention in large numbers. 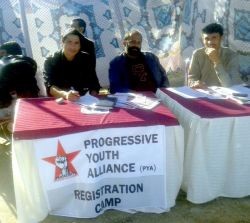 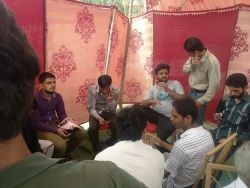 Karachi CampSome of the district bodies of PYA have decided to hold regional conventions before the founding central convention. The regional Convention of Rawalpindi-Islamabad held on November 22nd was a huge success with more than two hundred youth from various institutions participating. Regional conventions of Multan and Karachi would be held on 25th November with similar results expected. Seminars, meetings and lectures on topics such as free education, women's oppression and it's solution, the importance of student unions, the lessons of the life and struggle of Che Guevara and the national question have been organized in Dadu, Hyderabad, Lahore, Sialkot, Swat, Peshawar, Bahawalpur, Mardan and Kashmir. Seminars on the 98th anniversary of Bolshevik Revolution were also organized throughout the country in collaboration with the PTUDC. 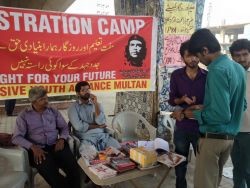 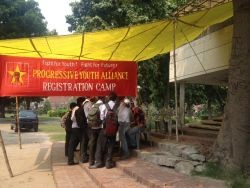 Registration camp in LahoreThe campaign of ‘PYA Lahore’ is in full swing particularly, as this organizational unit is hosting the founding convention. Six registration camps have been organized in front of huge institutions like the University of Lahore, the University of Central Punjab, the University of Management & Technology and the Government College University. Chapters have been formed at the Government College University, the Forman Christian College and the ‘Centre Flats’. Dozens of meetings are taking place with different organizations, youth councils and societies every week. A camp of the campaign will be organized in front of the Lahore Press Club from 1st to 3rd December in order to attract media coverage. 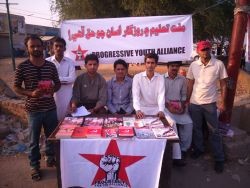 Considering that we have had such a multi-dimensional and energetic countrywide campaign, it is expected that around two thousand students and youth will be attending the convention on December 5th at Bagh-e-Jinnah (originally Lawrence Gardens) Open Air Theatre at Lahore. The event will be comprised of speeches by students and youth leaders, music, revolutionary poetry and a stage play. It will open at 11 AM and close at 4pm, after which a torch-bearing rally will march from the venue to Charing Cross, a place located in front of Punjab Assembly House in the center of Lahore. This historic founding convention of PYA will surely help to break the political stagnation of recent years amongst the youth. Building of Progressive Youth Alliance (PYA) will undoubtedly increase and strengthen the forces of Revolutionary Socialism in Pakistan.