Details
Our Correspondent in UAF
22 October 2010

Student protests are on the increase also in Pakistan. At the Agriculture University in Faisalabad the Revolutionary Council [Inqlabi Council], with a tradition going back to 1968, has been relaunched by Marxist students and in a recent meeting they called, close to 700 students turned up. 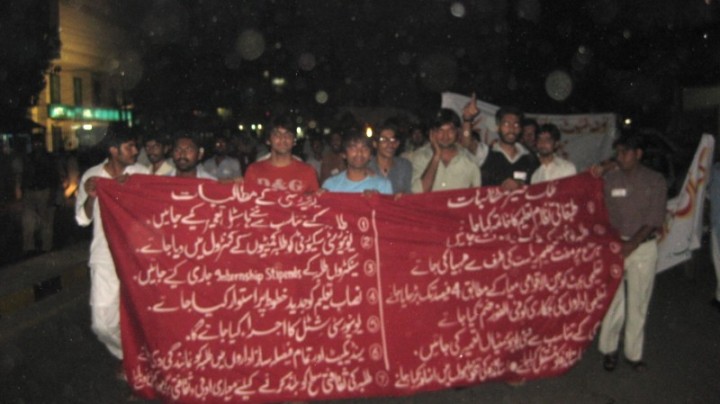 The 33rd Anniversary of the Death of the founder of the Inqlabi Council in the Agriculture University Faisalabad was held on October 20, in which students from various universities and colleges in Faisalabad participated in big numbers. The speakers emphasized the fact that the problems facing the students, along with generalized misery and poverty, can only end through a socialist revolution.

Every era has some specific character of its own. 1968/69 was the year which decisively had the character of a revolutionary period. Just like the Pakistan People’s Party, the Inqlabi Council (Revolutionary Council) was founded in 1968 by the most radical elements of that period in the Agriculture University Faisalabad.

It was basically a conglomerate of different tendencies that stood against the reactionary organisation of Islami Jamiat e Talaba IJT, the student wing of Jamat-i-Islami. And since then it has been a tradition for the students of this particular university.

The founding manifesto of this student organisation was quite radical and its founders vowed to pursue the revolutionary path being followed by the students in the whole world at that time. The main motive was to combat the influence of the IJT and give a platform to the students to raise their concerns before the administration.

As time passed, and the founders of the council retired or left university, the cast elements regained control and the council started to degenerate. The vices of drugs and illegal arms tainted the original objectives foreseen by its founders. These vices were patronised by the Zia ul Haq regime to mould the ideals of the students nationally and to create a reason to put this giant power back in the bottle so it would not pose any threat for the state.

After the brutal dictatorship of Zia, the Inqlabi Council was unable to resist the pressures of the objective situation and it completely fragmented into different caste organizations.

However, a few years ago the Marxists starting reorganising the Council along revolutionary lines and on the basis of the ideas of those who had founded it. The sole purpose was to give it its original socialist lines and to build a force of revolutionary students to overthrow capitalism in this country. 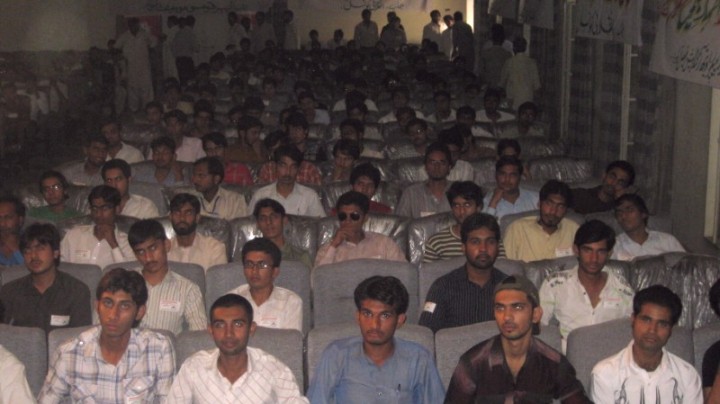 Asalm Meraj from the Labour Qaumi Movement was also present and he paid tribute to the late Lehri and said that the labour and student movements both are the sole power house of a revolution and his organisation would stand shoulder to shoulder in any hour of need.

Comrade Muazzam said that the students have the ability and potential to run the educational institutions and country better than these corrupt bureaucrats and we want to build a system which is free of the ruling cliques’ corrupt bureaucracy and ruthless landlords. He said that the PSF is in full agreement with all the demands of the Inqlabi Council and will always be there to help if any drastic steps will be taken against students in ongoing inquires.

Comrade Umar Rasheed from the Agriculture University briefly but eloquently described the overall situation of the students in Pakistan and the resistance which is gathering momentum against the latest cuts in the education sector and the privatisation of schools and colleges. He explained that we are not against any single Vice-chancellor or Administration of the university but that it is the system which is the main culprit and until the system is not uprooted completely the problems will remain.

Comrade Zohaib Butt explained what the reasons behind the violence in student politics are and what are the revolutionary ideals on which the PSF and other revolutionary student organisations are standing. These are the ideas of scientific socialism. In 1968/69 a socialist revolution was lost due to the lack of Bolshevik leadership but now capitalism is caught in an impasse and its downfall is being reflected in all spheres of society. The peasants and proletariat are looking to the students to play their role in the struggles and we all together are the only force which can end this dark night.

Comrade Amjad Shahswar said the historical division along religious lines was a disaster and now both Muslims and Hindus are not living a healthy and peaceful life across the border. We are the future of this country and we must arm ourselves with the ideas of scientific socialism to solve all the miseries of our poor people.

A peaceful protest was held at the end and students raised the slogans “Zinda Hai Council (the council is alive) and “Kaali raat jaaway hi jawaay surkh sawera away hi away” (The dark night will end and the red dawn will surely appear).

This was the first political programme held here after a gap of 15 years and it was a great success in which over 600 students participated. The environment inside the hall was electrifying while students listened to all speakers with great attention. This shows the desire among the students for change. And we are determined that we will build this Council on socialist lines and then link it with the power of labour in Faisalabad.

The banners of the PSF Punjab and the JKNSF were also there supporting the revolutionary struggle of the Inqlabi Council UAF. And the hall was decorated with banners with revolutionary slogans and demands of the students.