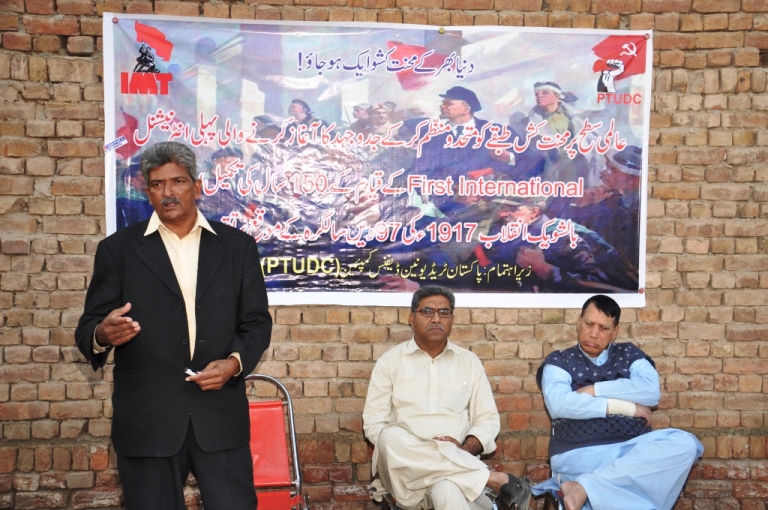 In order to commemorate 150 years since the founding of the International Workingmen Association, the first international organization of the working class, and 97 years of the Bolshevik Revolution, the Pakistan Trade Union Defense Campaign organized public meetings across Pakistan. Here we give brief reports of the meetings.

In Multan a meeting was organized on 16 November to mark 150 years of the First International and 97 years of the Bolshevik Resolution. The meeting was presided over by Tariq Choudhry of PTUDC and leader of WAPDA Hydro Workers Union Sayed Agha was the chief guest.  PTUDC organizer comrade Nadeem pasha was the stage secretary. Asad Patafi, Arshad Nazir, Zeeshan Shehzad, Nadir Gopang, Jam Sajjad, Mazhar Kaat, Aslam Ansari and Sardar Muhammad Hussain Thaheem Advocate addressed the gathering. The speakers said that the formation of the first international was the first serious attempt to unite the working class on the world scale. The struggle materialized in the form of the 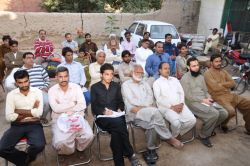 Bolshevik revolution in 1917 and a backward, semi feudal and illiterate country was transformed into an industrial and developed power. This was only possible through a planned economy. The collapse of Soviet Union was a failure of criminal Stalinism, not Marxism. A new wave of movements started in 2011 and is spreading all over the globe. Marxism is the only hope for the survival of humanity. The working class of Pakistan will enter the arena of history and the traditions of Bolshevism will rise again on a higher plane than the revolutionary movement of 1967-68. 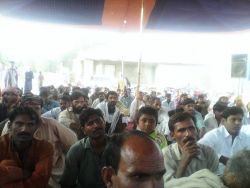 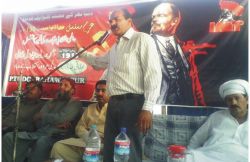 he workers. Choudhry Noor ul Hassan said that working class will advance in a revolutionary movement. Senior Vice President of PTUDC Rana Qamar Uz Zaman Khan spoke about the role of Karl Marx and Friedrich Engels in the first international. He explained the historical significance of the Bolshevik Revolution of 1917.  He pressed upon the need for the working class to unite in the fight for a socialist revolution to uproot the oppressive capitalist system. H 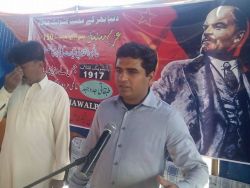 e said that the workers of the Gulistan Textile Mills are in the initial phase of their struggle and they would have to join hands with other workers and beware of the agents of the ruling class in their ranks. 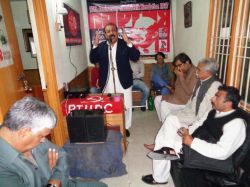 On 14 November PTUDC organized a meeting at Chinyot Bazar Chaudhary Towers where comrade Lal Khan was the chief guest and the main speaker. The meeting started with the recitation of a revolutionary poem by comrade William Rose. Organizer of the Students’ Rights Forum comrade Rizwan explained the achievements of the Bolshevik Revolution and the international crisis of capitalism. Leader of Pakistan Peoples Party comrade Ilyas Khan explained the 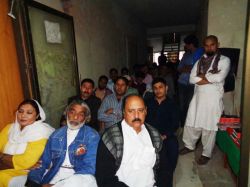 basis of the political crisis in Pakistan and the need to build a revolutionary party. Comrade Akhtar Muneer from Agricultural University recited a revolutionary poem. Inam Khan Niazi emphasized the importance of Marxist theory. Comrade Najaf Khan from Ghulam Muhammadabad said that the solution of the problems of the working class lies in socialist revolution. Comrade Ismat explained the gains for the women after the Bolshevik revolution.  Comrade 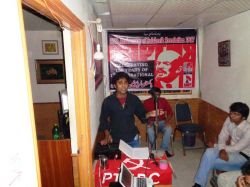 Usman recited another revolutionary poem. Comrade Lal Khan Summed up the discussion and explained in detail the great events of 1917 in Russia and the great revolutionary movement of 1968-69 in Pakistan. He said that a Leninist party and a revolutionary international were the need of the hour. Workers and students from Allied Hospital, GC University, University of Agriculture and technical college participated in the meeting. Comrade Umar conducted the stage and the meeting was concluded by singing the international.

On 10 November a meeting was organized by PTUDC to commemorate the Bolshevik revolution. The meeting was presided over by Professor Ayub Farooqi and Ali Murad Khetran. Leader of PTUDC Adam Pal was the chief guest and the main speaker. Amongst the speakers were Balochistan National Party’s divisional organizer Kaka Buzdar, general secretary PPP D.G. Khan Iqbal Bhutta, PPP senior leader Manzoor Ahmed Khan Lund Advocate, PTUDC leader from D.G Khan Ali Akbar, People’s Student Federation (PSF) leader Shahryar Zauq, Atif Javed and Sattar Lund. General Secretary PPP district Rajanpur and revolutionary leader comrade Rauf Lund was the stage secretary.  The speakers explained the history and significance of the Bolshevik revolution and solution of the problems faced by the working class can only be solved through such a revolution. The brutal murder of a Christian couple was strongly condemned in the meeting. A resolution was unanimously passed against privatization and anti-workers policies. The meeting was concluded by singing the international. 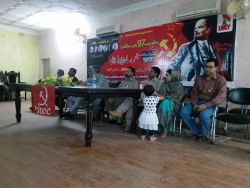 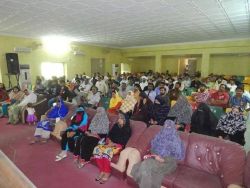 Senior Vice President of PTUDC Qamar uz Zaman Khan spoke about the history of the first International, Bolshevik revolution and its gains and impacts on the working class movements around the world. Leader of PTUDC Sindh Hanif Misrani explained the impasse of capitalism. Comrade Lal Khan explained the current political situation of the working class and the politics of non-issues by the ruling class. He explained the events of Paris Commune and the movement of 1968-69 in Pakistan. Dr. Mahmood Ul Hassan from PPP also addressed the gathering. 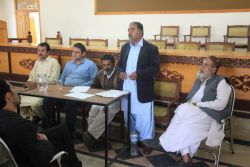 On 8 November a meeting was organized by PTUDC. PTUDC leader Adam Pal was the chief guest and the main speaker. General Secretary of PTUDC Nazar Mengal introduced the speakers. A large number of workers, youth and women were present in the audience.  Comrade Shakeela recited a revolutionary poem. Hassan Jan spoke about the History of Bolshevik revolution and the need to revive the B 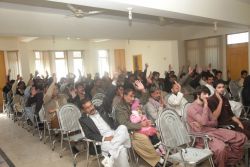 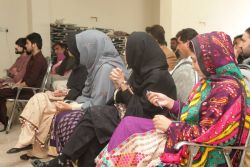 e crisis of capitalism, resurgence of national question, situation in the Middle East and misery that humanity is faced with. He said that today the need of socialism is more than ever before. Humanity has no way other than socialism or barbarism. The meeting was concluded by singing the workers’ international.

On 8 November PTUDC organized a meeting in Chopal, Nasir Bagh. Workers and students from numerous institutions participated in the program. Comrade Atif conducted the stage and leader of Pakistan Peoples Party comrade Ilyas Khan was the chief guest.

Leader of the Young Doctors’ Association Aftab Ashraf opened the discussion and spoke about the history and significance of the Bolshevik Revolution. Adeel Zaidi, Valeed Khan and Farhan Gohar explained the gains of the Russian revolution and planned economy and also the Stalinist degenera

tion. Comrade Hifza from Young Nursing Association spoke about the struggle of the nurses and need of socialist revolution today. Secretary General of YDA Punjab Dr. Tajammal Butt was also present at the occasion.PTUDC organizer Rashid Khalid explained the deepening crisis of world capitalism and the movements all over the world. Tahir Shabbir recited revolutionary poems.

Ilyas Khan summed up the discussion and explained the role played by Lenin and Trotsky. He said that there was simmering revolt in the working class and the history of the Bolshevik revolution will repeat itself. The meeting was concluded by singing the international.

Comrade Rahul welcomed the guests and explained the significance of Bolshevism today. The speakers explained the revolutionary movement of 1968-69 in Pakistan and the perspectives. Lal Khan and Riaz Baloch emphasized the need to build a revolutionary party to eradicate the misery of the working class. 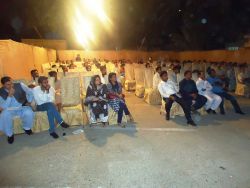 large number of workers, students, teachers and political activists were present at the occasion. The speakers said that the Bolshevik Revolution was the most import event in human history. The brutal murder of a Christian Couple in Kot Radha Krishan, Murder attempt on comrade Riaz Lund and grenade attack on the home of comrade Ghufran in Malakand were condemned during the meeting. 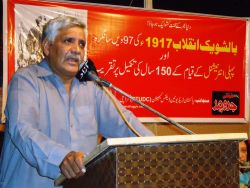 A resolution was passed to express solidarity with the Kurdish fighters battling ISIL. Resolutions were also passed to condemn the forced conversion of Hindu girls to Islam in Sindh and against the privatization of OGDCL and all other state enterprises. The meeting was concluded by singing the International. 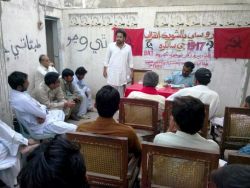 On 7 November Bolshevik day was celebrated in Dadu. A meeting on “Bolshevism, The Road to Revolution” was organized by PTUDC. Abid Zoner presided over the seminar. Rashid Zoner explained the history of Bolshevism and its struggle. 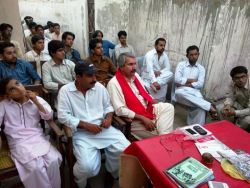 PTUDC organized a public meeting in District Bar on 8 November. Comrade Ilyas Khan advocate was the Chief Guest while a large number of lawyers and political activists attended the meeting. Comrade Nasir Butt conducted the stage. Speakers explained the significance of Bolshevik revolution of 1917 and its relevance in the present epoch.