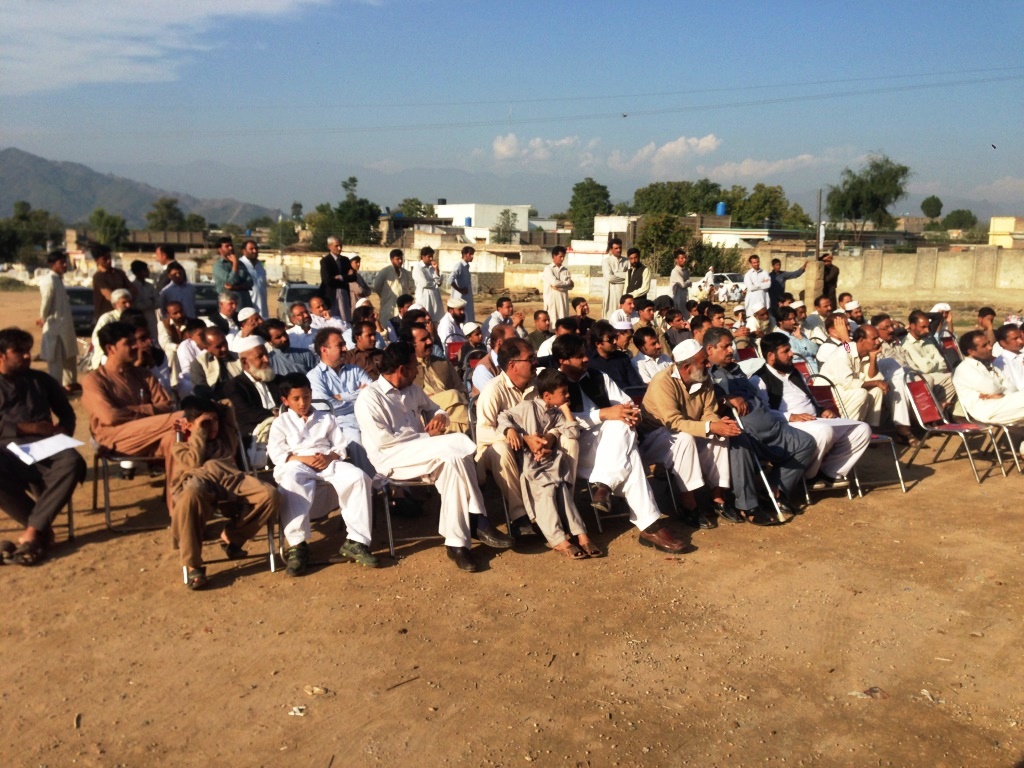 On Friday 17 October a condolence meeting was held for 23 year old Comrade Sajid Alam, area secretary of The Struggle for Malakand, who was killed in a tragic road accident. Killed by the intensely barbarous conditions found in Pakistan generally, and in Khyber Pakhtunkhwa in particular. As if this were not heartbreaking enough, the local Taliban tried to disrupt his funeral, calling him an infidel, making his grieving family's life an even worse hell on earth.

When they heard Lal Khan was coming to commemorate the memory of the comrade and console the family, the Taliban vowed he would never leave Malakand alive. He went. He consoled the family and comrades. He gave a fiery and inspiring speech and urged them to avenge this young life, unnecessarily snuffed out by a sick and diseased system in a sick and diseased country. Comrade Lal Khan is back home safe and sound. But the Taliban continues to harass and threaten Sajid Alam's family and the comrades. The comrades continue the irreconcilable struggle to socialist victory.

The condolence meeting was organized by the Progressive Youth Alliance and Pakistan Trade Union Defence Campaign in Malakand in which a large number of youth, workers, political activists and friends and relatives of Sajid Alam participated. Comrade Lal Khan was the chief guest at this occasion while comrade Nasir Amin performed the duties of stage secretary. 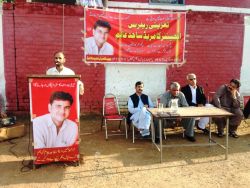 Speaking at the occasion a former teacher of Sajid Alam, Muhammad Sabir said that he was different from his peers in many different ways. He said he was a serious young person who had a deep interest in literature and poetry and hated inequality in society. He said that he last met him while travelling in a bus and during the discussion he shed light on the political situation in the country and whole world, and was really impressed by his knowledge and felt that he had become an extraordinary human being.

Comrade Imran said that Sajid Alam was a true and honest revolutionary and the best way to pay tribute to him is that we carry forward the struggle of socialist revolution.

Ameer Zaib recited some poetry of Sajid Alam in which he had explained the miseries of life in a powerful way. Comrade Fazl e Qadir from Peshawar and Comrade Bachazada from Swat expressed their views about him and said that he had dedicated his life for revolution and his struggle against Capitalism will not go in vain.

His elder brother Naveed Alam said that though he was younger than himself, still Sajid was his teacher. They had long discussions on politics, the economy and philosophy and he cleared his confusion in a beautiful way. He said that he was not an enemy of anyone's religion but his fight was against exploitation and inequality. 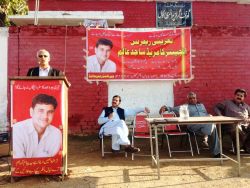 Comrade Ghufran Ahad said that men can die physically but their ideas remain alive. Sajid Alam will remain in our hearts due to his untiring work for socialist revolution. His dream to liberate mankind from poverty and tyranny will not die and we will fulfill his dream. He said that reactionary elements in this area with the support of the state have started a baseless campaign against comrade Sajid and the Marxists on a religious basis. We want to make it clear that our struggle is not against religion but against those people who consider themselves apostles of religion but are defending the interests of the ruling class.These people have used a personal matter like religion for making money and have become pimps of this exploitative capitalist system. If to raise the voice of the downtrodden and oppressed class is a crime than we will keep committing this crime again and again. He said that we are not pacifists and our patience should not be tested, we know how to respond to such threats. In this whole world wherever there is oppression we will fight against it, leaving aside prejudices of colour, race and religion. 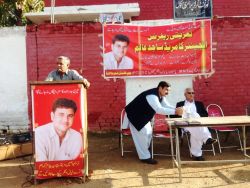 Comrade Lal Khan said that Capitalism is responsible for the death of young Sajid Alam. In this system money is made from the injuries of others and here death is cheaper than life. A huge part of the population lacks access to health care. If Sajid had been given basic health care after the accident he would have been saved. But he had to travel a long distance of many hours to Peshawar in an expensive private hospital to get treatment, when it was too late. He said that this brutal system has become a burden on society. There are more and more cars but the roads are narrow, which leads to more accidents every day. With comfortable public transport these accidents can end, but this system based on extracting more and more profits can't do this. He said that Sajid Alam was struggling for a system where no one could die with hunger, disease or terrorism, but this cruel system took away his life. At this occasion we vow to continue our struggle for socialist revolution and against this tyranny.We will revenge every injury this system has given to us.