The starkest contradiction of the present epoch is the huge level of inequality in which the vast majority of the human race is immersed in poverty, misery and deprivation in an era of plenty. And yet, today the means of production and modern advanced technology have the capacity to produce much more than the total needs for a decent existence of the human race. 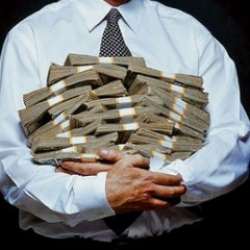 It was Karl Marx who predicted, some 150 years ago, in his epic work Das Kapital, that in the coming epoch, capitalist development will lead to a situation in which, “Accumulation of wealth at one pole is, therefore, at the same time accumulation of misery, agony of toil, slavery, ignorance, brutality, mental degradation, at the opposite pole.” The second most far-reaching and ingenious analysis and perspective put forward by Marx was that the nation state would systematically become redundant, as capital would assume a truly globalised character, cutting across national frontiers without any hindrance and obstacles.

Very few perspectives could have proved so correct after such a relatively long span of more than one and a half centuries. Astonishingly, his analysis is more relevant today than it was at Marx’s time. About 190 multinational corporations, from telecommunications, armaments, finance and food production control almost 85 percent of world’s economy. We live in a world that is an economic whole, but is divided up into discrete, irrational political units, with a crushing domination of the world market by these international corporations, backed by the imperialist states. It is these corporate banks and monopolies that dominate the finances and economies of the planet. The problem that globalisation faces under a capitalist system — based on the pursuit of profit — is that it is creating more and more poverty and inequality.

The social and class contradictions this profit system creates, due to excruciating deprivation, gives rise to social unrest, revolts and sometimes revolutions. The ebbing of these movements creates a social and political vacuum that is often filled with religious fundamentalism; national chauvinism and other reactionary tendencies that mostly give rise to terrorism, violence and mayhem. It is not an accident that the year 2013 saw more terrorism and bloodshed than at anytime since records began. This year is proving to be even worse. Conditions such as revolutionary movements of the masses or reactionary conflagrations in society threaten capitalist interests and creates the contradiction of the propping up of the nation state by the ruling elites to preserve their system and rulership. In this epoch, the rise of nationalism becomes a reactionary tendency from an economic and a social perspective of the class struggle and human emancipation. Nation states tend to be more vicious and repressive. The ruling classes and their political and media experts use the justification of “controlling” social unrest for exonerating the crimes of the nation state against the working classes and the oppressed masses.

Inequality has reached such harrowing proportions, that today just 85 individuals own more wealth than three and a half billion souls on this planet. Even after the 2008 crash of world capitalism, the biggest in recent history, the rich have become richer in spite of a recession and slump in the world economy. The multinational corporations have also accumulated massive wealth in spite of the severe capitalist crisis. According to a report formulated with the data from Fortune/CNN Money and IMF sources on just US corporate capital firms, they are richer than entire countries.

These multinational companies spend massively on lobbying in the US Congress and at the same time pay heavy bribes or kick-backs to the rulers of the countries like Pakistan. They use these subordinated states to carry out massive exploitation of the workers and the resources of these countries, extracting huge profits.

The ruling classes of these former colonial countries are historically belated, economically corrupt and debilitated, while also being morally, socially and politically reactionary. Due to their organic weakness and plundering of the state they cannot develop or sustain an independent and viable economy. The imperialists also use the client states where they “invest” to do the dirty work of repressing the toilers who dare to retaliate against these injustices or even try to unionise.

However, it is not just the workers and masses in the ex-colonial countries that this imperialist vulture capital subjugates to the extreme cruelties of contract labour, low wages and poverty through capitalist slavery. These imperialist bosses also target the workers and youth of developed countries such as the United States who have been suffering a painful decline in their living conditions for more than three decades. Poverty, unemployment and declining access to decent health and education have become a norm in the US.

The owners of these corporations are not necessarily US citizens but can be from any country in the world. Their exploitation of human labour is not restricted to any particular country either. In a certain way, they are making it abundantly clear that capitalism long ago went beyond the national boundaries in seeking profits and is now exploiting the workers of all countries. In his epic work, Imperialism: The Highest Stage of Capitalism, Lenin explained that a key indication of imperialist tendencies is the export of capital to extract higher rates of profits. And there is no end to their lust for more and more money.

In this period of mild reaction and terminal decay of capitalism the drudgery faced by the workers has become more intense. No freedom or prosperity is possible in any country of the world today without the overthrow of capitalism. A genuine class struggle that can achieve this historic feat has to be organised, transgressing the national frontiers on an international basis. That is the reason why Marx and Engels put forward the historical slogan, “Workers of the world unite!”