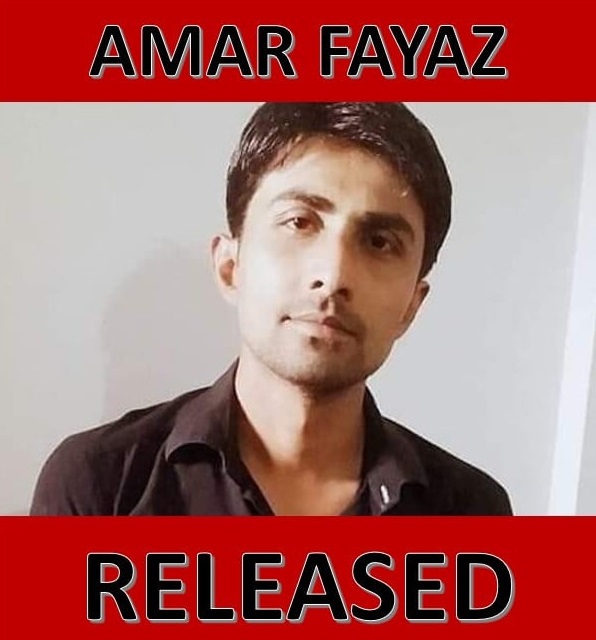 We were delighted to report on Monday that our comrade in Pakistan, Amar Fayaz, was returned safely after spending almost two months in captivity following his forced disappearance by the state. In this report, we initially neglected to include the efforts of our comrades in Argentina and Chile, who gathered a huge amount of support from leading members of the labour movement in those countries. We have now updated the article to reflect this: click here to skip to the new section.

We have just received the great news that comrade Amar Fayaz has been released today, the security agencies dropped him at his village. Amar’s release was made possible through the immense and successful international campaign organised by students, youth and workers from all around the world. We will update our supporters as we get more details on Amar’s release.

We thank all our supporters for their immense efforts: including campaigning, signing and sharing our petition, and performing various solidarity actions for the release of Amar Fayaz.

Amar Fayaz was abducted by the state security agencies on 8 November 2020 at around 1:30 am. Men in two security services vehicles, along with three police cars, abducted Amar in the city of Jamshoro in the Sindh Province of Pakistan.

Until his release, his whereabouts was not known by his friends and family, including his wife and a daughter. 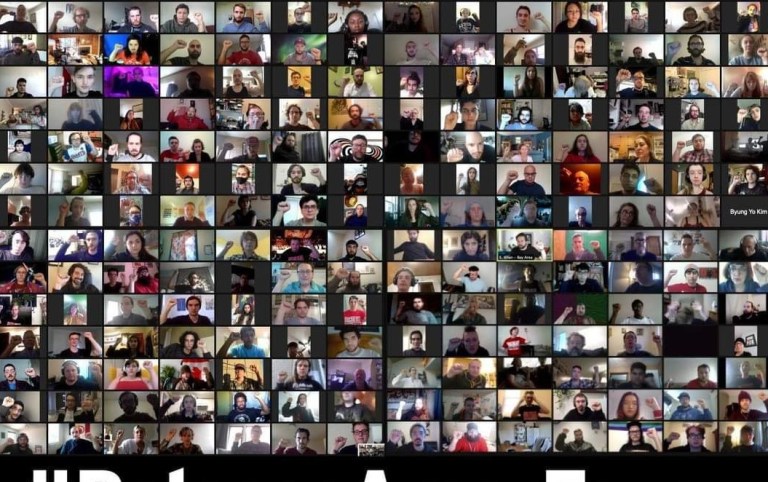 We launched an online petition, for which we managed to get over 12,200 signatures from 50 countries. This is our biggest petition so far. This is thanks to our supporters, who in addition to the signing, shared the petition to their friends, families and contacts, which resulted in the high number of signatories. Pakistani authorities and embassies were made aware of the numbers of signatures from various countries.

In many countries, there were COVID-19 lockdowns, which restricted outdoor gatherings. However, in a few countries with rather loose COVID-19 restrictions, supporters organised peaceful (and safe) protests outside Pakistani embassies to demand the release of Amar Fayaz. Supporters chanted slogans, held banners and placards, and presented letters to the embassy. On several occasions, peaceful protesters were harassed by the embassy staff and local security officials.

A day of action was organised in Canada, where supporters initiated a massive campaign of protests in front of Pakistan missions in Canada in Toronto, Vancouver, Ontario and Montreal, alongside sending letters and emails to Pakistani officials and getting representation in the mainstream media.

Our supporters gathered the support of their local members of parliament and trade union leaders for Amar Fayaz’s release.

Furthermore, a process was triggered to present a motion in the Canadian Parliament, sponsored by Niki Ashton MP.

In Sweden, an independent Socialist MP, Amineh Kakabaveh, signed a protest letter to the Pakistan Embassy and several Left Party MPs were in the process of sending letters to Pakistan.

In Germany, we gained the support of Tobias Pflüger, a Die Linke MP of the Bundestag, who wrote to the Pakistani embassy in Berlin in his capacity as Chairman of the German-South Asia Parliamentary Friendship Group.

This is just a short report of the international solidarity campaign for Amar Fayaz’s release. Thousands of our supporters and comrades showed their immense support through signing the petition; regularly posting pictures and appeals on social media channels, including Twitter, Facebook, Instagram and TikTok; writing to Pakistani authorities, and making appearances in the media.

Both MPs and former MPs of the Partido de los Trabajadores Socialistas (PTS-FITU) expressed their solidarity with the campaign for Amar Fayaz's appearance alive, demanding the government of Pakistan respect democratic rights and repudiating any ideological and political persecution.

Also, the MP for Santa Fe, Carlos Del Frade, of the Frente Social y Popular, sent an audio request to the Pakistani government for the release of Amar Fayaz, and demanded that they stop these practices of state terrorism.

Likewise, Corriente Peronista Descamisados expressed its solidarity with the campaign for the safe release of comrade Amar Fayaz, denouncing the systematic action of the Pakistani state that stigmatizes and persecutes political activists, journalists, students, etc.; remembering that the Argentinean people know the struggle against persecution, disappearance and death.

Chavismo Sur also demanded the immediate and safe release of comrade Amar Fayaz and emphasised that, as activists of Chavismo in Argentina, they also know this struggle against the repressive methods of the ruling class first-hand. Every injustice generates indignation, whether in Venezuela, Argentina, Pakistan or anywhere else in the world, because the struggle to end the endless horror of capitalism is a global one.

Flavia Dezzutto, Dean of the Facultad de Filosofía y Humanidades de la Universidad Nacional de Córdoba, expressed her condemnation of the abduction of Amar Fayaz, and demanded that the Pakistani state answer for his fate and that his civil and human rights be respected. She also emphasised that Amar Fayaz is a fighter for the educational community, which is why his disappearance and the violation of his political and human rights are particularly alarming.

And finally, from Chile, candidates of the Lista Independiente Unidad de Trabajadores para la Convención Constitucional, sent their solidarity with Amar and the struggle to respect democratic rights.

A victory for international solidarity!

Amar Fayaz’s release is a great victory for our campaign, which shows that when it comes to oppressing students and workers, an injury to one is an injury to all. Only through a united and joint international struggle are we able to successfully resist all attacks on youth and workers by the forces of oppression.

The Pakistan Trade Union Solidarity Campaign will continue to raise its voice against all brutalities against students and workers in Pakistan and around the world and will work with our network of supporters and comrades in our campaigns.

Through your support, we will keep our international campaigns alive and win further victories!