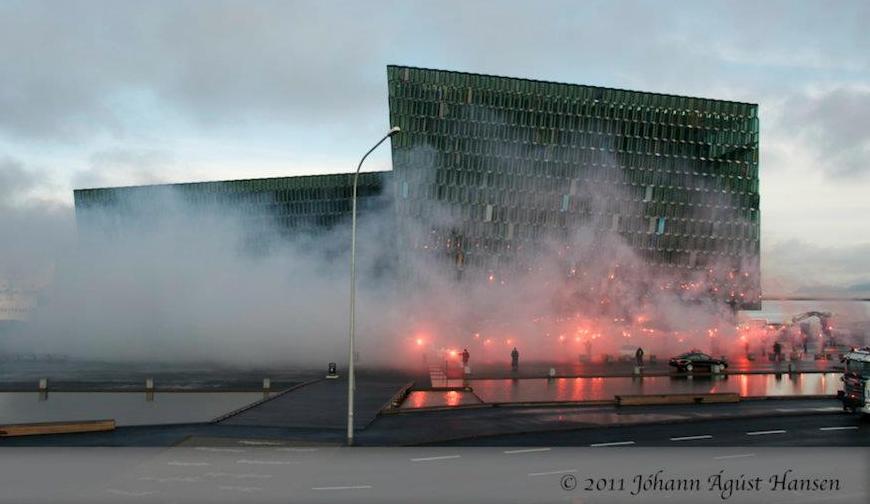 We have received this report from Iceland about a protest outside a conference hosted by the Icelandic government and the IMF. The letter makes the point that the IMF package for Iceland has been unsuccesful and that ordinary Icelanders are struggling to make ends meet. It shows that the political and economic crisis in Iceland is continuing.

On the 27th of October the Icelandic government and the IMF co-hosted the conference: Iceland's Recovery: Lessons and Challenges. The conference theme was the economic recovery achieved in Iceland due to the joint efforts of the convention holders. "Speakers included international and Icelandic academics, Icelandic policy makers and IMF staff involved in designing or implementing the program, as well as representatives of civil society." (See here: IMF seminar: Iceland´s Recovery—Lessons and Challenges)

The general public is in uproar and, other than the IMF and the government, no one feels that this partnership has proven successful. Furthermore, representatives of the public are hard to spot among the the conference speakers. A group of activists, on behalf of the general public, took it upon themselves to write a letter to the foreign speakers prior to the conference pointing out some discrepancies (

Press release). The group followed up with a red distress SOS at the conference entrance. 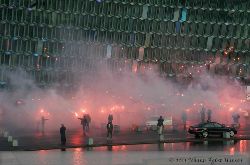 Protest outsideThe red SOS was a repetition of a similar distress call by the Indefence-group at Bessastadir (the presidential residence) when presenting the president with  signatures insisting that the decision to publicly guarantee the Icesave debt be subjected to a referendum. The picture taken over Bessastaðir during this event caught the attention of the international media, making the Icesave dispute known worldwide.

This red SOS in front of the Harpa conference center during the conference in Reykjavik is an attempt to tell the world that the IMF recovery package in Iceland has been unsuccessful for the general public. Claims that Iceland is „an example of how to overcome deep economic dislocation without undoing the social fabric.“ (Iceland's Recovery: Can the Lessons Be Applied Elsewhere?) are simply wrong. 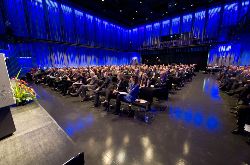 Inside the conference. Photo: IMF/Halldor KolbeinsThe consequences for Iceland are by no means different from what has occurred elsewhere with IMF involvement, with about 50% of Icelandic households struggling to survive and 80% of single parent families. (Statistics Iceland: Household finances 2011, note that the English version omits the most shocking numbers on single parent families).

The conference speeches can be found on the IMF website.