Hungarian PM Viktor Orbán secured his third successive term in the 2018 general election. Now, for the first time since 2010 polls show that the “united opposition” would defeat his party if an election was held today. According to the survey conducted by one of the best known Hungarian pollsters Medián, Fidesz support fell by 6 percent in a single month to 34 percent in December, while the opposition added 2 percent and took over Fidesz at 36 percent.

This is due to the government’s mismanagement of the coronavirus crisis and the fact that many have begun to see through their approach. Namely: waging a top-down class war whilst telling poor people that George Soros, the European Union and immigrants are responsible for their misery could only work for so long. However, the opposition to Orbán does not offer a substantive change - there will be no alternative for the Hungarian working class without relying on its own strength.

Orbán’s supermajority in parliament allows him to amend the constitution and pass any law without cooperation from the opposition. During the first wave of the pandemic, government MPs voted in favour of ruling by decree without a set time limit. Following international pressure, the government then declared a “state of medical crisis” until December, with a review planned in three months. In May 2020, an omnibus law (one covering a number of unrelated topics) was passed. It includes a whole host of measures, including the ending of the legal recognition of trans people, which means that trans people can no longer alter their gender and name on official documents. Fidesz also introduced a law under which spreading “fake news” about the coronavirus can result in a jail sentence of up to four years, which Orban’s opponents claim is being used to silence dissent against the government.

Another measure in March 2020 enabled employers to ignore any provisions of the labour law during the state of emergency, if there is an informal agreement between the employer and the worker. The argument was that it is necessary to make labour legal regulations more flexible in order to tackle the virus. A labour law specialist said that the measure practically amounted to suspension of the labour law.

Orbán continued waging a diplomatic war against the European Union over the so-called Rule of Law Conditionality, which would see EU funds cut for member states that disrespect the “rule of law”. Orbán’s regime uses the technique of simply calling everyone who disagrees with his political agenda an agent of George Soros (a Hungarian-born American billionaire of Jewish heritage). A famous example of this (among many) was when the government accused Soros of being behind the actor George Clooney’s criticism of Orbán.

More and more people have started to resent the government’s measures. Not that they don’t believe that restrictions are needed to tackle the pandemic, but because while stopping the economy and social life, the state has not provided any effective social protection to them. And has in fact used the virus as a cover to undermine workers’ rights and protections.

In April 2020, the government announced the privatisation of four of the most prestigious art universities in Budapest. Due to the unique type of privatisation, characteristic of the Hungarian ruling class nowadays, the government gained more influence over the operation of the university than when it was owned by the state. Privatised universities fall into the hands of foundations, which are led by someone who is loyal to the government. As a move against this measure, students of the University of Theatre and Film Arts occupied their campus at the end of summer 2020. The students occupied the building for several months and organised protests with thousands of people attending.

Despite their brave resistance, the students have made a serious mistake, one made many times before. They looked at their struggle as separate from any other struggles taking place at the same time. They didn’t want to risk becoming “political” by incorporating other social issues. Most tellingly, workers of the Russian steel mill Dunaferr (which is the biggest employer in Dunaújváros, the former “City of Stalin”) who protested simply to get their wages in time, have expressed their solidarity and initiated a dialogue between the protesting students and workers - but no response was received from the former.

Nevertheless, social unrest and dissatisfaction with the system will likely increase as the Hungarian economy is heading towards a new stage of crisis, along with the rest of the world. According to a survey conducted in November by GKI Economic Research Co., with the support of the EU, the business sector in Hungary has never been so pessimistic. 17,000 small and medium-sized enterprises have applied for loans during the pandemic to avoid bankruptcy. What lies ahead is therefore likely to be more attacks on wages and terms and conditions alongside a wave of bankruptcies and unemployment.

The emergence of Orbán’s regime 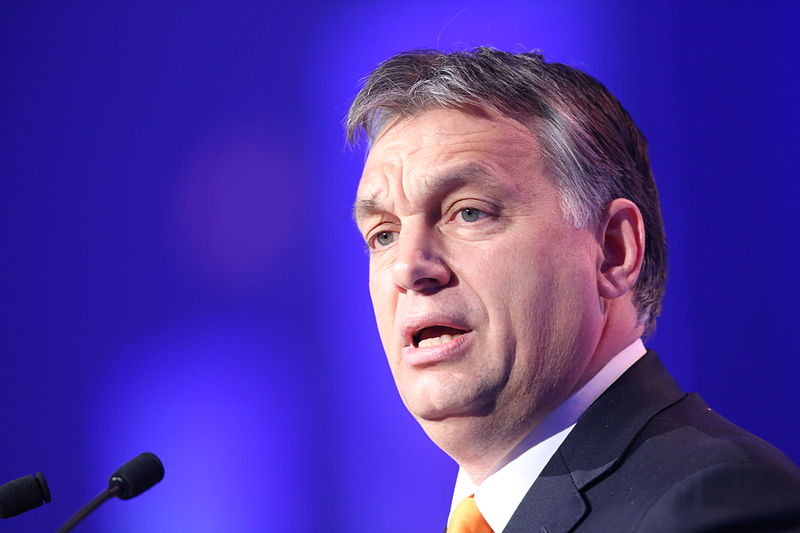 It’s quickly become clear that Orbán’s promise of a prosperous, economically independent Hungary is nothing but a lie and cynical deception of the people. But the united opposition offers no real alternative for workers / Image: EPP

After the restoration of capitalism in Hungary in the late 1980s, there was a consensus among the two dominant political blocs that the only possible way for the people to prosper is through modernisation, western integration and liberal democracy. By 2010, this modernisation project had completely failed in the eyes of the public. The 2008 crisis and internal political tensions (including violent demonstrations against the then ruling Hungarian Socialist Party in 2006) resulted in the notorious setback of its political representatives: that is the centre-left and liberal parties.

By this time, Viktor Orbán’s party (Fidesz) could successfully present itself as an alternative to this failed social and political project. Orbán emphasised the need for the creation of a national bourgeoisie and promised to fight against the EU, big corporations and Western subordination. These were the main reasons for their victory in 2010. Since then, they have been governing with a supermajority.

It’s quickly become clear though, that Orbán’s promise of a prosperous, economically independent Hungary is nothing but a lie and cynical deception of the people.

Many examples highlight this. Lőrinc Mészáros, childhood friend of Orbán and formerly a gas-fitter, has become the richest person in Hungary within less than 10 years. The law firm owned by the Minister of Justice represents big banks against victims of the financial crisis. Anti-worker laws on several occasions were written explicitly by industrial lobbyists. The State Secretary for economic development was the Executive Director of one of the biggest German automotive suppliers for 10 years.

Yet this anti-worker, oppressive character of the Orbán-regime has not been articulated and/or criticised by any opposition party. This is no surprise when you look at the composition of the opposition. It includes a liberal bourgeois party (Momentum), which supported Macron against the yellow vests; two centre-left parties; two green parties; and the right-wing Jobbik party.

In their recently published political agenda, the united opposition stated that they will “protect national borders”, “step up against irregular migration” and represent the position that Hungary should control its own borders and decide for itself how many refugees are allowed to enter the country. So, whilst claiming to oppose Orbán, they end up mirroring his positions, thinking this is the only way to win elections.

It is clear that they do not offer a genuine alternative to Orbán’s politics. While many workers and students do support them at the moment simply to get rid of Orbán, there’s something which is clearly not covered by either of the two political blocs, that of the interests of the working class.

The working class is able to become a political actor on its own, as was most recently illustrated in 2018, when trade unions led tens of thousands of workers to protest the slave law, which raised the yearly cap on overtime to 400 hours from 250 (an additional working day a week), and gave companies three years to pay for the work. Although the law has been passed, it’s rarely applied in practice.

Class-conscious workers and students must continue to build their own movement, because they cannot count on anyone else. There is some way to go, but only through hard and patient work can we ultimately build an organisation capable of leading the working class to overthrow capitalism. Then we can build a society in which our common resources will be placed under the democratic control of the working class.