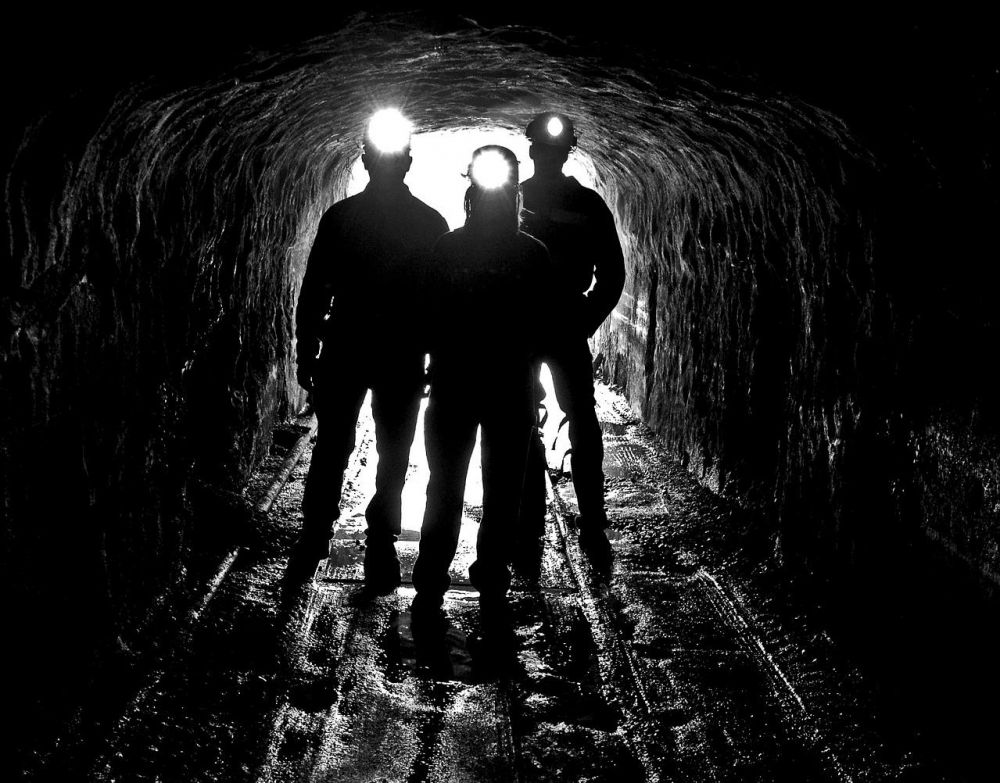 Alan Woods writes an obituary of Olwyn Hughes, a Welsh miner whose political life went back to the period during and just after the War, when he first got active in politics, first in the Young Communist League, and then in the Trotskyist Revolutionary Communist Party.

I first met Olwyn in 1971 in a Marxist discussion class we had organised in the small Welsh mining town of Ammanford. But Olwyn's political life went back a lot further, to the period during and just after the War, when he first got active in politics, first in the Young Communist League, and then in the Trotskyist Revolutionary Communist Party.

For a young miner like Olwyn, it must have been difficult not to have been a Communist. Ammanford used to be known as "Little Moscow". And not accidentally. The mining valleys of South Wales had a long history of bitter class war. Memories of the general strike and the inhuman treatment meted out to the miners and their families driven back to work by starvation by the mine owners in cahoots with Winston Churchill were burnt into the consciousness of a whole generation and passed on to the next.

The Russian Revolution offered a beacon of hope to these workers who embraced it with that passion so typical of the Welsh. The South Wales miners' union actually affiliated en bloc to the Communist International. Even in the 1970s I remember that there was still a bust of Lenin in the Ammanford workingmen's club where we held our Sunday night meetings, alongside the photographs of young men from the area killed in the Spanish Civil War.

Tragically, the Stalinist degeneration of the Russian Revolution had its effects on the British Communist Party, as all the others. A whole generation of class fighters were cynically duped and deceived. And what fighters they were! In spite of everything, one has to admire the militant spirit and dedication of the Communist workers who sincerely believed that in carrying out the orders of their leaders, they were preparing the revolutionary transformation of society. Olwyn used to speak of one of these, who would be out every evening selling the Daily Worker. A man of small stature, he would stride into the miners' club, plant himself firmly in the middle of the floor clutching his bundle of papers under his arm, and shout out: "Does anybody want to read the truth?"

But the real truth was that the Communist Party was no longer a weapon for changing society, but a tool in the hands of the Moscow bureaucracy. This was clearly revealed by the cynical gyrations of the CP line before and during the Second World War. Dudley Edwards, who was a marvellous old comrade. described to me one incident on the eve of the War when Stalin suddenly signed a non-aggression pact with Hitler. Prior to this, the CP line was one of "popular frontism", a class collaborationist policy, the alleged purpose of which was to secure an alliance of the Western "democracies" with Russia against Nazi Germany. Knowing nothing of the change, Dudley was preparing to mount the speakers' rostrum to defend the popular front, when someone tugged him by the sleeve and whispered "Comrade, the Line's been changed!" So he threw his notes away and delivered a speech saying the exact opposite of what he had intended. There were many such cases.

The abandonment of the policy of popular frontism and the adoption of an ultra-left policy in the first days of the War did not shake the confidence of the working class Communists, though many middle-class fellow-travellers immediately jumped ship. What really caused dismay in the ranks was the next change of Line. When in the Summer of 1941, Hitler cynically broke his pact with Stalin to attack the Soviet Union, Moscow required a totally different policy. Hitherto, the British CP had had a caricature of Lenin's policy of revolutionary defeatism, demanding, in effect, peace on Hitler's terms. They irresponsibly fomented strikes at the slightest pretext at a time when the British workers were working round the clock for the War effort. Now, at the drop of a hat, the Party called a halt to all strikes and demanded the workers step up productivity for the war.

Overnight, without any explanation, the imperialist war became a progressive war against fascism. This was too much for many Communist workers to swallow. How could such a policy be justified? What did it all mean? The only people who gave explanations were the Trotskyists of the Revolutionary Communist Party (RCP). While consistently calling for the defence of the USSR, they advocated a policy of class independence, calling on the Labour Party to break the coalition with the Tories and Liberals and take power on the basis of a socialist policy of nationalising the banks and monopolies under workers' control and management. As a result they were viciously attacked by the Stalinist leaders of the CPGB who issued a scurrilous pamphlet called Hitler's Secret Agents, and even called on Herbert Morrison, the Home Minister (and Labour Party member) to illegalise them - which he refused to do.

Throughout the War, the Labour Party agreed to an electoral truce with the Tories. They were all in the wartime coalition, so there were hardly any elections. An exception was the by-election in working-class Neath in 1945, when the RCP fielded a candidate in a safe Labour seat. The Stalinists were beside themselves with rage. They did everything possible to disrupt the RCP's campaign, but without success. The RCP made a big impact with its programme and ideas - not least among sections of the CP workers.

A few miles away from Neath, along a desolate, wind-swept valley, lies the small mining town of Gwaun-cae-Gurwen, popularly known as G-C-G, or "the Waun". Here the RCP established an active branch, mainly of miners who had come over from the Communist Party. The leading spirit was one Johnny Jones, a self-educated man, like many Welsh workers at that time who took the trouble to raise themselves above the terrible conditions of life to conquer for themselves the world of culture and ideas. Johnny used to write marvellous articles for the Socialist Appeal from which you could get a clear idea of the lives, thoughts and aspirations of working people. Still a youth, Olwyn joined this group. He never really left it till the moment of his death.

It took some guts to be an active Trotskyist militant in a CP stronghold like that. The Stalinists looked on them as traitors or worse, and on more than one occasion criticism was not limited to verbal exchanges. Olwyn gave me the following example. One of the RCP members (I don't remember the name) was quite a tough man, although quietly spoken. Once, he and Olwyn were chatting over a pint in the local club, when a particularly fanatical Stalinist came up behind them and began taunting the alleged "Trotsky-fascists." Olwyn's companion turned round and addressed the provocateur: "Are you talking about me?" The man had scarcely had time to reply in the affirmative, when the fists started to fly. The aggressor ended up on the carpet, whereupon the victor looked challengingly round the room: "Now then. Anyone else got anything to say?" They did not.

Of course, my own acquaintance with Olwyn started many years later. Yet he always spoke of that period with the liveliest enthusiasm and affection. There was a reason for that. These were the years that gave him the education and the ideas that would shape the rest of his life. In the bleak days of the capitalist upswing, when the forces of genuine Marxism were isolated for a whole historical period, Olwyn became temporarily cut off from the movement. But unlike others he always kept faith. Not the blind faith of a religious fanatic, but the conscious faith of a working class revolutionary who has absorbed the fundamental ideas and theories of Marxism.

When I met up with him in that study group, it was as if the knot of history had been suddenly retied. He instantly recognised our ideas as his own. When he met Ted Grant again after many years he commented in amazement: "He's just the same as always". He was really delighted that we had remained firm, defending the ideas of Marxism "just the same as always". He was always a voracious reader and had a very high political level. Whenever we met, he always insisted in discussing theory. The question of the Soviet Union was one of the things that interested him most. Shortly before his death he had just read Ted Grant's new book Russia - From Revolution to Counter-Revolution. He regarded both this and Reason in Revolt as wonderful achievements, and "a real addition to Marxist thought."

All his life, Olwyn Hughes remained what he had always been - a working miner. In the last period, he worked in small private pits, and on one occasion he described the kind of conditions that prevailed in them. There was an explosion in a nearby mine, and Olwyn rushed to help with other miners. The first one to enter the mine, at first he could see nothing. Then, as his eyes got used to the dark, he could see a man on the ground, black all over with coal dust. Eventually, the man spoke to him in Welsh: "Olwyn. Don't you know me?" It was a friend of his. What Olwyn did not know was that, beneath the thick layer of coal dust, most of his skin had been blasted away by the explosion. He died shortly afterwards. Later, the mine owner claimed to have found a box of matches in the dead man's pocket. This version was supported by the man from the mines inspectorate who came to investigate. When I saw Olwyn in the pub, his face was ashen. "Well," he told me, "I was in that mine after the explosion. The heat was so bad, it had melted metal. Yet they say there was a box of matches!"

From this single incident you can learn more about Olwyn Hughes and thousands like him than in any book. The unshakeable loyalty to the cause of socialism and the working class he displayed all his life did not come from books, though he loved them too. It came from life itself. From hard experience. From a deep and enduring sense of rebellion against injustice. It is a matter of the most heartfelt regret that I did not manage to see Olwyn before he was taken from us. I had intended to. Now that meeting will never take place. This short tribute must stand in its place. It is the only kind of monument that I know Olwyn would want to have.