Britain
Share
Tweet
The leader of the attempted occupation of the Visteon plant at Basildon (component supplier to Ford) speaks to Socialist Appeal. After the ending of the occupation, the workers have maintained a twenty-four hour picket on the factory. The plant in Belfast remains occupied.

The leader of the attempted occupation of the Visteon plant at Basildon (component supplier to Ford) speaks to Socialist Appeal. After the ending of the occupation, the workers have maintained a twenty-four hour picket on the factory. The plant in Belfast remains occupied.

I was the former deputy convenor at Basildon up to 2003. I am affected personally by the threatened closure. I, like other pension holders, find my pension is in receivership with the government. It was our duty to come here in solidarity with the present workforce and with the former workers and pension holders.  We arrived here at 10am on the day after closure was announced. There was divided opinion as to whether to occupy. The advice from the union (Unite) was that occupation would be illegal. 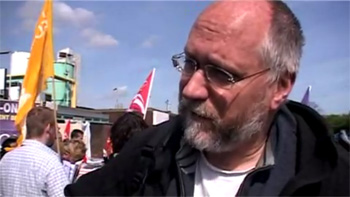 Des Heemskerk at the Visteon plant at Basildon

We then took a vote on whether to ignore that advice. Two dozen of us voted to ignore the advice and occupy. I led the occupation through a back gate. We got in completely unhindered. We occupied the plant from 10 onwards, conducting radio interviews and generating publicity for the occupation.  When we were discussing at the gates at 10am against the argument that occupation would be illegal, I argued that if the Chartists hadn’t committed illegal acts we wouldn’t have universal suffrage; that if the Tolpuddle Martyrs hadn’t broken the law and been transported, then we wouldn’t have a trade union movement; and if the suffragettes hadn’t fought the law, women wouldn’t have the vote.  It is better to break the law than break the poor, as the slogan from Poplar Council in the 1920s reminds us.

With the smallness of our numbers, there was a build up of police during the course of the day. There were about 120 police in riot gear, with police dogs barking and a lot of intimidation. They were walking through the factory and peering into the board room, which we had occupied. A police negotiator turned up and told us we’d all be arrested. Five of the 24 decided to go up on the roof, as had happened at Enfield, where they had 80 on the roof. The roof here was unsafe and that didn’t give us confidence, and what with the smallness of our numbers and concern about being arrested, we voted to end the occupation. So we walked out in a dignified manner to tremendous applause.

Although the occupation didn’t succeed, it gave our cause tremendous publicity. We were having discussions throughout the day with the workers while we were occupying. We were discussing the reasons for the collapse and the question of the whole capitalist system, which has caused the crisis.

In Belfast the police hadn’t been near the plant. The factory is in the Falls Road and they’d made no attempt to interfere. At Enfield they got a court order, an injunction, against the occupation. However the injunction had a technical mistake in it, so the occupation continued. The whole question of the occupation was inspired by the occupation of Waterford Crystal in the South of Ireland. There have been massive demonstrations in Dublin, and movement in unprecedented numbers throughout Ireland. The idea of occupation spread to Belfast and from there to Enfield and to Basildon, where we have had a partial success. The occupations have been an inspiration to all workers. 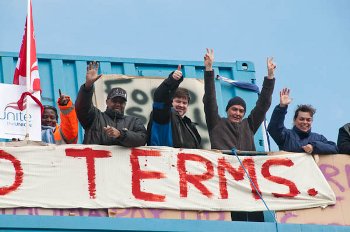 The whole idea of occupation came from tactics used by the labour movement in France and also in the USA. General Motors at Flint, Michigan was occupied in the 1930s. There were sit-down protests to establish trade unions at Flint. Workers draw inspiration from other movements. This could be repeated on a large scale. The lessons have been carried from Waterford to Belfast and then to Enfield and Basildon. The tradition of occupation has started in Britain and will  be firmly established.

The closure is not just because of the crisis but because of management taking advantage of the crisis. They are doing what they are doing to make a profit. They have deliberately run the company into the ground, and moved jobs to Slovakia where the wage differential with British wages is 7:1. This is a prime example of capitalists squeezing workers and trying to squeeze, cajole and drive down conditions.

A document has been retrieved from Companies House by the local MP. Visteon management set up a new company on January 28th.They have the deliberate aim to bankrupt us and then reopen as Visteon Automative Products, as a new company with the same machinery and a new workforce with lower wages and conditions. This is the ugly face of capitalism. There is only one way to end this profiteering. We have to occupy and take production of goods into our own hands. The solution is nationalisation under workers’ control and management. There must be production for need, not profit. In other words get rid of the capitalist system, which is rotten to the core.

Documents leaked to the Belfast Telegraph reveal that Ford made cast iron guarantees to Visteon workers that they would not lose out when the new components supplier was spun off in 2000.

“Accrued seniority and all existing terms and conditions, in particular pension entitlements, will be transferred to the new employment contracts,” the documents state. “For the duration of their employment, terms and conditions will mirror Ford conditions (including discretionary pension in payment increases) in the respective countries (lifetime protection).”

The agreement also noted that before the full spinoff Ford employees working in Visteon activities were eligible to volunteer to be reassigned to Ford and that all collective agreements, including investment and employment security agreements, would be fully adopted by the new company.

Davy McMurray from Unite said the documents are proof Ford has ongoing responsibilities for its former employees. “How they can say there were no guarantees is beyond me,” he said. Ford asserts it is under no “legal or moral” obligation to help Visteon UK employees.