Britain
Share
Tweet
Workers of the Prisme Packaging Plant in Scotland are occupying their factory since March 4 after they were told that they were to be laid off without any back pay. Since then the workers are fighting for their right to work and pay. This shows the growing radicalisation of the working class of not only Scotland but also of Britain as a whole.

As socialists we clearly support the movement of the workers in fighting for their right to work and pay. There is no doubt in my mind that supporters of Socialist Appeal, and those who are amongst the readership of Socialist Appeal, must absolutely support the fight for their pay that the workers of the Prisme Packaging Plant are engaged in and have been since Wednesday, March 4, 2009. 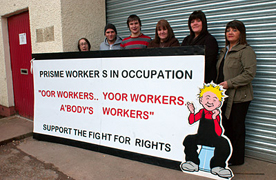 Prisme Packaging Plant opened as per usual on Wednesday the 4th.  The workers came in to begin work but by 9am the Managing Director, the person who the workers had thought that was the owner of the company, all of a sudden resigned and handed the workers of the company individual letters. In these letters the workers were told that they were to be laid off without any back pay which had been due since 1st of March. The situation naturally can be better explained by this quote from Matthew who has worked at the Prisme packaging plant for two years. He said:

"On Monday we came into work as normal and the Managing Director came in and gave his letter of resignation. So we phoned the company secretary who was actually on holiday. We were told to speak to a guy called Alan Dand. On Tuesday he called us, and an administrator came to look at the accounts. Then the company told us that they didn’t have enough assets to pay for the administrator and said, ‘Looks like we’re just going to shut the door’.

"We were told that the director and a legal representative were coming to tell us our rights but in fact the legal representative was for the director and wouldn’t tell us anything. They won’t even tell us who owns the company! We demanded that we be given a letter how much we were entitled to in redundancy payments, our P45’s and statutory redundancy forms. When we received the letter it stated how much our statutory redundancy payments were and that we were entitled to wages, pay in lieu of notice and accrued holiday pay. Then the next sentence of the letter said ‘Unfortunately, we do not have any money to make these payments to you’.

"They said there were other routes we could take to get our redundancy payments, but all they have suggested is speaking to the Citizens’ Advice Bureau.

"After receiving these letters we were told to leave and come back at half nine in the morning but we decided we’re not leaving until we receive what we’re entitled to. We’re not giving them the opportunity to lock the doors while we’re out so we end up with nothing."

It has also been reported that Maureen a worker of the factory for 13 years spoke of the optimistic mood amongst the workers in the factory “We have decided to continue our fight to put this company to shame. We have to fight for our rights. The support we have had has been tremendous, totally amazing." This shows only in a small part the growing radicalisation of the working class of not only Scotland but also of the United Kingdom as a whole. If we base the outlook of how this occupation goes in regards to that of the Chicago Republic Windows factory occupation then , should the Prisme workers continue their struggle, they may look at seeing the company bought over by another and the workers managing to keep their jobs. However we cannot be sure how the capitalists will react in this instance.

Send messages of support to the workers occupying the Prisme Packaging Plant by texting or phoning: 07970875455 or alternatively you can send an email to prismeworkerssolidarity@googlemail.com

In addition to sending the workers of the Plant messages of support supporters, should see about gathering together canned foods and organising a collection at local Labour party and trade union meetings, so that they can be sent to the workers to help them through the occupation. These can be sent to:
Prisme Packaging & Design Ltd
Unit 2 Angus Works
Tannadice Street
Dundee DD3 7PT