US foreign policy is dictated by its role as an imperialist power. Some of the most glaring cracks are opening in the Middle East. Obama is being forced by the objective conditions to change the specific approach of US imperialism without changing the general course whatsoever.

US foreign policy is dictated by its role as an imperialist power. By imperialism, we mean the monopolistic rule of the big banks, which have control over all the other economic sectors of society, and the carving up of the world into spheres of influence by the powerful capitalist nations. After WWII, and even more so after the collapse of the USSR, the US found itself as the most powerful imperialist nation and the sole world superpower. The modern history of nearly every underdeveloped or “third world” nation involves imperialism stamping its policies onto them by various means, both direct and indirect, economic, political, and military, through free trade agreements, covert actions and coups, proxy wars, and outright invasion. 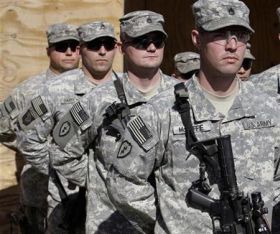 Capitalism’s phase as a relatively progressive force for human development has long been passed. Today, the US finds itself on top of the heap, a position that it refuses to yield, even as the heap begins to rot at its core. This serves only to pile the contractions higher and faster. There are cracks appearing everywhere in the dominance of the imperialists. It is precisely at this juncture that diplomacy is needed to complement the more blunt methods. Enter Obama.

Some of the most glaring cracks are opening in the Middle East. Obama is being forced by the objective conditions to change the specific approach of US imperialism without changing the general course whatsoever. For the time being, his strength lies in presenting the current objective weakness as a “change in policy,” while at the same time, not altering any policy in any meaningful way.

It has now been six years since the invasion and subsequent occupation of Iraq. Despite the “withdrawal” of US troops from Iraq’s major cities in late June, the occupation nevertheless continues. Although Republicans fumed and fussed about Obama’s plan for Iraq, painting him as willing to “cut and run” and all the rest, Obama is keeping the political and military position of the US in the Mid-East much the same. He has simply had to tactically retreat, in order to attempt to regain some ground lost in recent years.

Although the Iraqi government is now formally in charge, the US is still maintaining a longer-term military presence of as many as 50,000 troops. General Petraeus, in early May, announced that, “[W]e’re going to have ten Army and Marine units deployed for a decade in Iraq and Afghanistan.”

While there is big publicity for scaling down US troop deployments in Iraq, there is no mention of the private security contractors in the country, which make up a formidable private mercenary army, numbering around 133,000 (around the same number of US troops still in Iraq). A June report by the Pentagon shows that, under Obama’s presidency, there has been a 23 percent rise in “Private Security Contractors” working for the Department of Defense in Iraq and a 29 percent increase in Afghanistan. While this report specified DoD contractors, it did not include the figures of other agencies, such as the State Department. “This means, the number of individual ‘security’ contractors could be quite higher, as could the scope of their expansion,” as was recently pointed out by Jeremy Scahill, the author who brought public attention to Blackwater (now called Xe), one of the largest private security contractors in Iraq.

Contract bidding with private oil companies has been opened up. To pay for the enormous destruction caused by the war and to give at least the appearance of not entirely selling out the country’s sovereignty, the Iraqi government is so far attempting to make a show of its “independence.” In other words, they are trying to drive up the price they get for selling off Iraq’s natural resources.

As for the masses of Iraq, the war solved nothing. Saddam may be gone, but the country is in ruins. Hundreds of thousands of lives have been shattered. The poverty millions face is incalculable. The only way forward is to link the struggles of the Iraqi working masses to the broader struggles currently taking place in the region. The presence of US imperialism in any country in the Middle East is a threat to all, and to the world. Ultimately, this struggle must move toward socialism, which could finally bring lasting peace and prosperity to the region, through a genuine, democratic plan of production using the region’s rich resources to develop mass programs to eradicate the poverty and misery that results from the imperialist strangulation of the region.

Even before the Iraq War, there was the occupation of Afghanistan, where the situation is no better. Here there is not even the semblance of a plan for withdrawal. Both wings of the US ruling class are in agreement on the Afghanistan occupation. In February 2009, it was reported that the US will build two huge, new military bases in southern Afghanistan.

Given the vast oil resources in the Persian Gulf, Caspian Sea, and Central Asia, and the increasing competition with Russia, China, and India, the US wants to ensure it has a direct military presence in Central Asia.

The Russian imperialists have protested fairly vocally over the US setting up massive permanent bases and other infrastructure so close to their sphere of influence. China, as well, has set up favorable long-term trade deals with Pakistan, in order to secure its influence in the region. In June, Obama signed a $103 billion war supplemental bill that has provisions to increase funding for Pakistan’s military. There are other deals in the works that would favor trade between US corporations and Pakistan.

The increased incursions into Pakistan are a sort of “Plan B,” after the assassination of Benazir Bhutto. But as more and more civilians are being killed in the attacks, it is undermining support from within Pakistan. In order to keep Pakistan in its sphere of control, the US will use Al-Qaeda and the Taliban, as a pretext for increased intervention, if necessary.

The revolutionary developments in Iran are terribly worrying for Obama and the US imperialists. Their slow motion reaction to the post-election mobilizations was a signal of this. While having a policy of regime change for Iran, they know a genuine mass movement organized from below, which could spread throughout the region, is not in their interests. They have learned this lesson in Latin America. Obama is being careful to not upset the balance in the region any more than he has to. But his attempts to defuse contradictions that have been building up for decades will, ultimately, prove impossible.

Both Russia and China have increasing influence with Iran, which was added as a candidate to the Shanghai Cooperation Organization, a regional counter to NATO, and an organization which rejected US observer status in 2005. 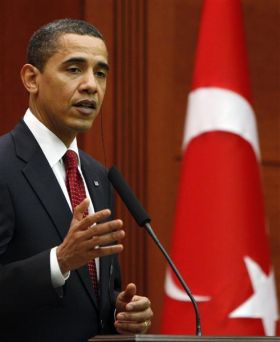 Obama in Turkey This same shifting of influence was what prompted Obama to visit Turkey this year, in an attempt to shore up support for the ongoing “War on Terror.” U.S.-Turkish relations have been somewhat strained since the start of the Iraq war. However, Turkey still hosts a major U.S. base in the region and has its own military might, including shared nuclear capabilities. Due to its straddling a very strategically important region of the world, it is being courted by all major players, from the Europeans and the Americans to the Iranians, the Russians and the Chinese. This explains why, in the midst of the worst economic crisis in decades, Obama put a visit to Turkey high on his list of priorities.

The global crisis of capitalism is having a profound impact around the world. There is not a single stable regime in the entire Middle East, from Israel to Egypt, Jordan to Iran. Sharp changes in the balance of world forces are on the agenda. The task for Marxists is to be prepared, rather than caught off-guard by events. The recent developments in Iran are an example. We must also keep our eyes on countries like Egypt and Morocco.

Obama and his administration are doing their best to ensure the continuation of the present system. Ultimately, it is the task of the US working class to put an end to capitalism at home and imperialism abroad. This is not just a nice slogan or “good idea,” but in a very real sense, the only way forward for humanity. The “policy change” that we really need is a change in class rule. The capitalist class is no longer fit to rule humanity; it’s therefore high time the working class majority ran the show. For an end to the rule of the big banks and the imperialist carving up the world! For a Socialist Federation of the Middle East and the World!