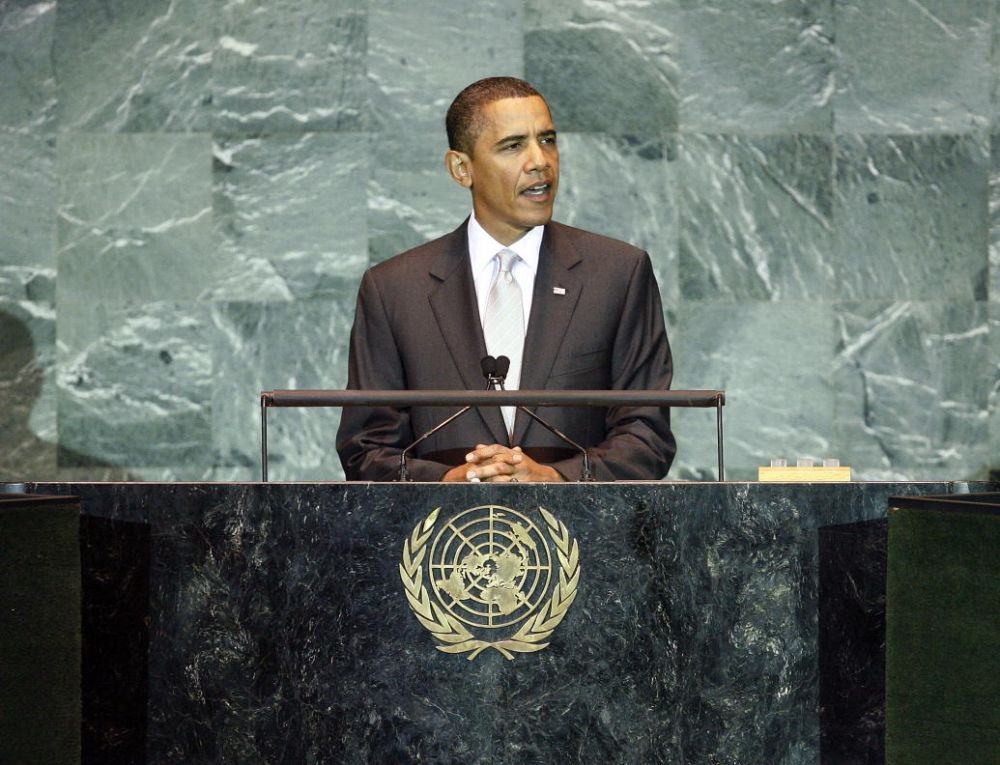 As Barak Obama took the podium to speak at the annual session of the UN General Assembly on Wednesday (of last week), his speech seemed to be coming from another planet, about another planet. His posture and sophistry of oration had waned. He was saying things he didn’t really believe in.

His references to wars and conditions in different regions and the prospects for the world capitalist economy were analogous to Orwell’s ‘Newspeak’. The visibly atrophied confidence, he was futilely trying to muster, exposed above all the decline and decay of the mightiest imperialist power in history.

Obama hardly mentioned Latin America, as not much good news is coming for the bosses of the world from that crucial continent. With a left-wing swing in politics and the emerging mass movements threatening US hegemony, the beleaguered imperialists cannot contemplate a military aggression against the rising tide of the oppressed. If it were not for the reformist leaders and lack of a Leninist leadership, the overthrow of capitalism and the end of imperialist plunder would have gone a long way during the last decade. But after the resurgence of the class struggle in South America it was the Arab revolution that shook imperialism and the existing world order.

With a nauseating rhetoric on democracy, he was praising the fall of the dictators who had been toadies of US imperialism right up to the point of their fall. After all, not long ago, it was under Hosni Mubarak when Obama made his ‘historic’ speech in Cairo. Not one criticism was raised then against the Mubarak regime. The biggest partner of US imperialism in the Arab world is the Saudi monarchy that has given sanctuary to those very dictators who were overthrown by these mass revolts. The partners he mentions include the monarchies and despotic regimes of Morocco, Jordan, Bahrain, the UAE, Qatar and other reactionary dictatorships that are repressing the people and are being supported by imperialism even today. However, all of these despotic regimes are in crisis and will be swept away by another tide of mass revolt that is being prepared.

But the most pathetic part of Obama’s speech was when he rejected the recognition of the Palestinian state by the UN. Even the most elaborate diplomatic hypocrisy could not conceal his disgraceful retreat on this issue in the wake of the onslaught of the reactionary Israeli state. With their strong lobby in Congress and with the backing of the imperialists, these right-wing Zionist leaders call the shots in US Middle East policy. The weak and subservient Palestinian leaders of the West Bank came up with a meek demand of changing the status of the Palestinian state from a non-voting ‘observer entity’ to an ‘observer state’. The Vatican is an ‘observer state’. The nervous response to even such a mild ‘status’ demand is an expression of the panic the US and Israeli ruling classes are gripped by.

And for the first time in its history the Israeli state was confronted with a challenge that has shaken it to its foundations. The ruling elite and the Netanyahu regime were rattled. But the challenge did not come from without. In recent weeks the workers and youth in Israel rose against the system and the state demanding revolutionary change and social justice which was supported by 90 percent of Israel’s population. It is only through such class war that the workers can decisively defeat the Zionist state and ensure the liberation of Palestine. Such a revolutionary victory would also begin the process of the creation of a Socialist Federation of the Middle East.

The ‘two state solution’ always was and is a deceptive utopia. Even some of the serious bourgeois analysts accept this. The former CIA strategist and veteran US journalist, Eric S. Margolis wrote recently, “Many outsiders believe a two-state solution between Israel and the Palestinians is possible provided irksome details can be resolved. This author does not share this rosy view. Israel’s hard right Likhud Party and its semi-fascist coalition allies are determined to retain the entire West Bank and Golan Heights. Israel’s strategy has been to hold endless, phony ‘peace talks’ while rapidly expanding West Bank and Golan settlements. An upgrade of Palestine’s orphan UN status won’t do anything to address these basic problems”.

The Palestinian question, like innumerable disputes around the world, exposes the impotence, deceptiveness and frivolous character of the so called United Nations. Ever since its inception in 1945 this body has not been able to resolve a single major conflict, from Kashmir to the Congo, and the Korean peninsula, the list is endless. 218 resolutions have been passed by the UN calling for the end of the occupation of Palestine by the Israeli imperialist forces. We all know what has come out of it. Since the Second World War there have been more conflicts, wars and insurgencies that have killed more people than the causalities of the two world wars combined. Ant this bloodshed continues to get worse.

The UNO has been the handmaiden of the imperialist powers and it acts in accordance with the interests of these bosses. It is in reality a debating club of the elite leaders who oppress billions across the planet. It was founded as a result of a rotten agreement between the ‘victorious’ imperialist capitalist powers and the bureaucratic caricature of a socialist state [the Soviet Union] where the genuine working class revolution had degenerated along nationalist lines. The deals that once again divided up the world according to spheres of influence were struck during the summits between Churchill, Stalin, Roosevelt and Truman in 1944-45 at Yalta, Tehran and Potsdam. Churchill wrote in his book ‘Triumph and Tragedy’, “The moment was apt for business, so I said, ‘Let us settle about our affairs... Don’t let us get at cross-purposes in small ways’... I pushed this across to Stalin... He took his blue pencil and made a large tick upon it. It was all settled in no more time than it takes to set down... After this there was a long silence. At length I said, ‘might it not be thought rather cynical if it seemed we had disposed of these issues, so fateful to millions of people, in such an offhand manner?” (Pp.227-8) Thus the arch-reactionary exposes the betrayal.

The foundation stone of the UNO building was laid by the same President Truman who had ordered the dropping of two atom bombs on Hiroshima and Nagasaki, even when the Japanese were ready to surrender. Obama said correctly that no number of UN resolutions can achieve independence for the Palestinians. It is a dis-United Nations that plays on national divisions. All serious issues in politics and society are resolved by wars and revolutions. The imperialists are waging those endless wars. The proletarian vanguard is preparing for revolution.