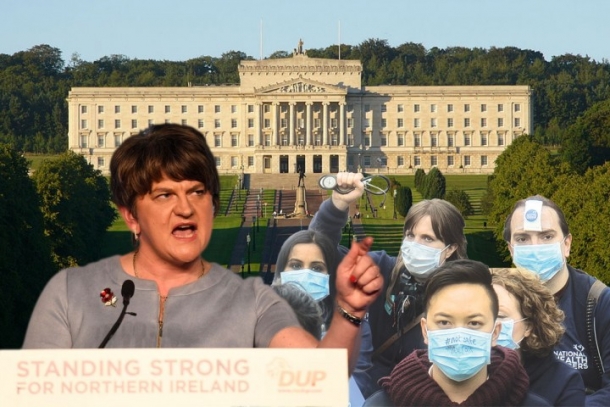 COVID restrictions are set to loosen up in the North of Ireland – part of a cynical attempt by politicians to use the pandemic for sectarian ends. Workers in both communities need a united socialist struggle to end this chaos and crisis.

The Stormont Executive in the North of Ireland has voted to relax lockdown restrictions from next week, beginning with cafes, coffee shops, and non-licensed restaurants.

The loosening of measures, described by the head of the BMA in the North of Ireland as “an act of careless vandalism”, was agreed despite Stormont’s own official medical adviser stating clearly that a failure to extend the lockdown by two weeks would result in excess deaths continuing to spiral.

The question of the lockdown has once more plunged Stormont into renewed crisis, barely ten months after power-sharing was restored. Describing the crisis that this has opened up, DUP leader Arlene Foster bullishly declared: “Sometimes compromise doesn't come easy and it has to be fought for to secure it.”

What has been ‘fought for and secured’ is the compromising of hundreds more lives in the quest to restore profits. 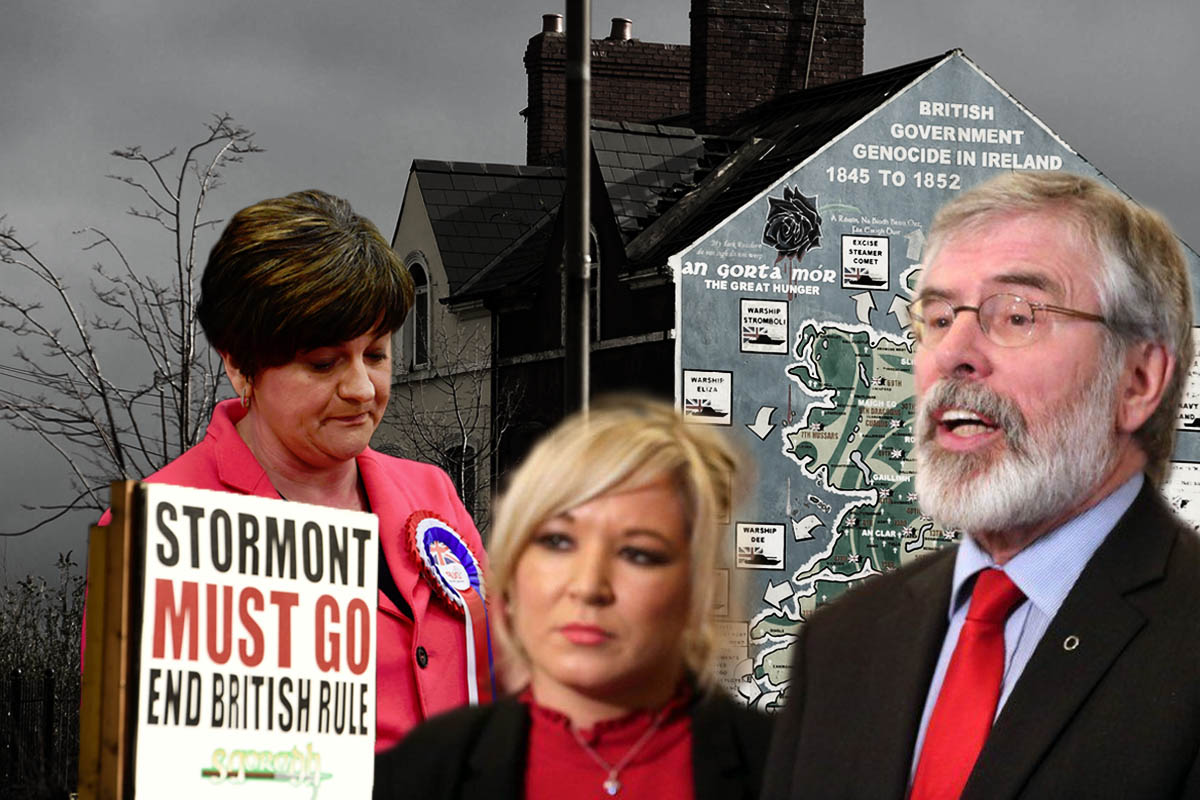 After barely ten months up and running, Stormont is once more mired in crisis / Image: Socialist Appeal

This latest ‘compromise’ was only agreed after months of neglect that allowed a health emergency to unfold, and a week of the DUP playing sectarian football with the question.

Several weeks after local lockdowns had been declared in parts of the North of England, the DUP were still resisting any notion of a circuit breaker to prevent the spread of the epidemic, on account of the damage it would do to businesses.

By the time a lockdown was declared in the North of Ireland in mid-October, Derry City and Strabane in the west of the region was registering 970 new infections per 100,000 residents per week. This compared with a level of 624 per 100,000 in Liverpool at the same time.

The catastrophic resurgence of the disease is fundamentally linked to the same factor that has led to its resurgence in the North of England: poverty. In Derry, two thirds of children grow up in poverty. In 2017 the city was ranked last in a list of 57 cities across the UK in terms of ‘economic health’.

As Stormont Executive Ministers meet to discuss the #coronavirus restrictions, Dept of Health data shows that hospitals here are once again operating at 100% capacity.

There are 10 unoccupied beds in NI - however 4 hospitals are operating beyond their capacity. pic.twitter.com/R5UVuO5zYM

Having been late to enter lockdown, the DUP have been determined to come out of lockdown early. A week ago, UUP MLA and Health Minister Robin Swann proposed an extension of lockdown by two weeks on the basis of advice from the chief medical adviser. Yet his proposal was unilaterally vetoed by the DUP using the so-called ‘cross-community mechanism’.

These ‘mechanisms’ were built into the Good Friday Agreement a quarter of a century ago, nominally at least to prevent a unionist or nationalist majority in Stormont enacting sectarian legislation that negatively impacted the other community.

Far from having attenuated sectarianism, we now have the spectacle of these mechanisms being used by the DUP, who have a majority in the unionist camp at Stormont, as a veto. They have effectively declared COVID-19 a question of conflicting sectarian interests!

In the end, the UUP and Alliance opted to vote for the DUP’s proposal, whilst the SDLP abstained, and Sinn Féin opted to vote against.

On the back of the debacle, one commentator in the Belfast Telegraph wryly asked readers, “Well, are you disillusioned with power sharing yet?” After barely ten months up and running, Stormont is once more mired in crisis.

As the relaxing of measures was announced, 143 care homes across the North were reporting outbreaks. Meanwhile, hospitals are running at 101% capacity. Healthcare workers have now received a devastating stab in the back from Stormont.

As usual, the DUP have tried to shift responsibility for the chaos onto other parties. UUP Health Minister Robin Swann has been picked out in particular for his frank remarks about what the crisis will mean for non-COVID patients. He pointed out that because 400 beds were being used by COVID-19 patients, cancer patients may not get the treatment they require and could die as a result.

Reacting with faux-outrage, DUP MLA Alex Easton claimed he was “horrified and shocked” by Swann’s statement. “The health minister has had months to prepare for this second surge of COVID-19,” Easton asserted, “and has had millions and millions of pounds pumped into the health service.”

No one who is aware of the dilapidated state of the NHS in the North of Ireland can honestly claim to be ‘shocked’ by Swann’s words – above all an MLA in the very Assembly that has overseen its calamitous decline.

Indeed, the only reason the UUP took the portfolio for health in the first place was precisely because the DUP and Sinn Féin didn’t relish taking responsibility for the state of the healthcare system.

Mandy McAuley looks at the impact of the second Covid-19 wave on the Northern Ireland health service.
Tonight 22:45 BBC1.
We're in the middle of a second wave and the DUP wants to ignore medical advice and open hospitality.
It's madness but not surprising from the DUP.
£££££s

Before the COVID-19 crisis erupted, the North of Ireland was estimated as having 2,103 unfilled nursing positions. Of more than 300,000 patients on waiting lists across the North, more than 100,000 have been waiting for more than a year.

This was already an eye-watering figure for a region with a population of little over 1,800,000. Yet that figure has leapt by a third since the first wave of the virus. In some cases, waits can last longer than five years, as is the case for rheumatology appointments.

The crisis in the NHS has made every day a payday for capitalists in the health sector. To plug the gap in staffing, huge sums of cash are doled out every year to private agencies. By tipping the NHS over the precipice, COVID-19 has only meant more money is now being poured into private coffers. From 29 June to 18 October this year, over 1,000 patients had procedures performed by the private sector…and paid for out of the public purse. 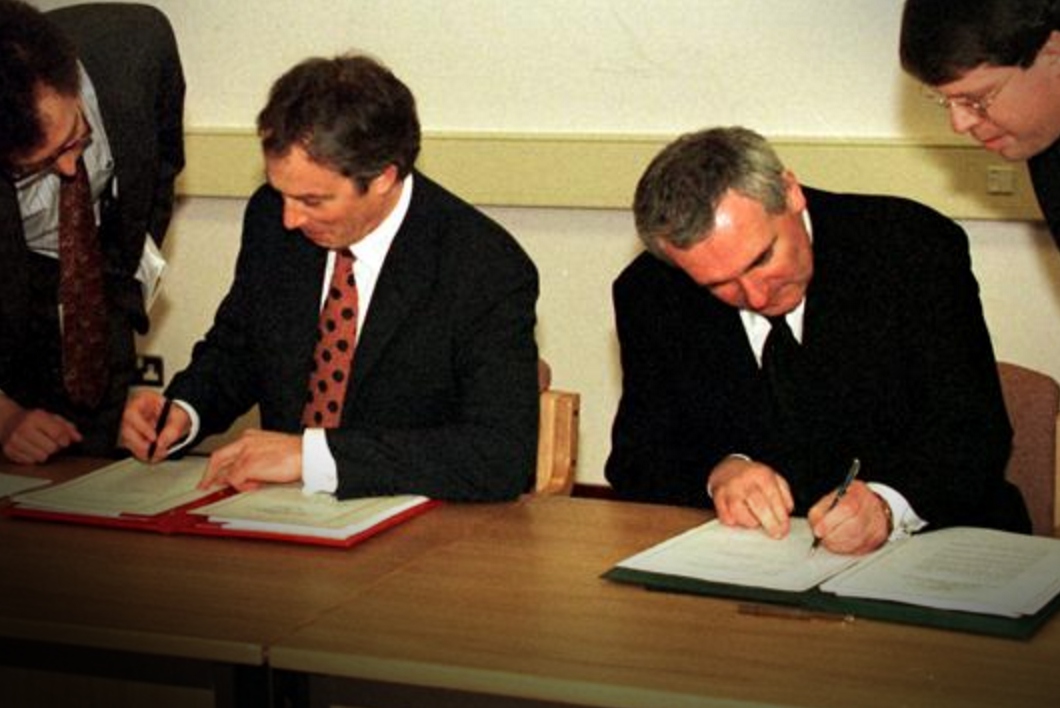 Since the Good Friday Agreement was signed a quarter of a century ago, the Stormont government has been dogged by crises / Image: public domain

Since the Good Friday Agreement was signed a quarter of a century ago, the Stormont government has been dogged by crises. Periodically the Assembly has collapsed, only for politicians across the sectarian divide to come together and promise one ‘fresh start’ after another.

The latest ‘fresh start’ was promised in January this year, after three years of the North bumping along without a government. We explained at the time that its revival would solve precisely nothing.

Despite the periodic breakdowns at Stormont, the Good Friday Agreement could appear to get by as long as capitalism was booming, and as long as joint EU membership of the UK and Ireland meant that the border didn’t present an issue.

But by 2017, after a decade of austerity, the mood in society had turned to one of revulsion against the self-serving politicians from both sides of the sectarian divide. The stability of the political setup was delivered a one-two knockout combo with the Brexit vote.

The Renewable Heating Incentive scandal, in which the DUP assisted big business in looting £500 million from the public was the straw that broke the camel’s back. Sinn Féin had no desire to pull the plug on the Assembly. But, faced with a mood of bubbling anger in society and a political challenge on their left flank from People Before Profit, they were forced to do something.

The period from 2017 to 2020, however, only saw conditions worsen for working people. This was blamed by the media and governments in Dublin and London on the lack of a working executive. The tragic killing of Lyra McKee in Derry by the stray bullet of a New IRA shooter was used to further heap pressure on the DUP and Sinn Féin to get back to negotiations.

In the end, the threat of new elections to the Assembly, and the prospect of incurring the wrath of an increasingly embittered and angry electorate, forced the parties to go once more into government. The December 2019 elections were a warning shot to both Sinn Féin and the DUP. In the absence of an alternative, many voters expressed their disgust at the biggest parties by voting SDLP or Alliance.

Now, the Stormont merry-go-round has now come full circle and it teeters once more at the brink of collapse. The whole thing is a farce. Every few years people are encouraged to vote along sectarian lines, after which all parties unite anyway in a Grand Coalition. Ministerial portfolios and other benefits of office are then horse-traded by politicians; big business are invited in as partners; and workers are left out in the cold. 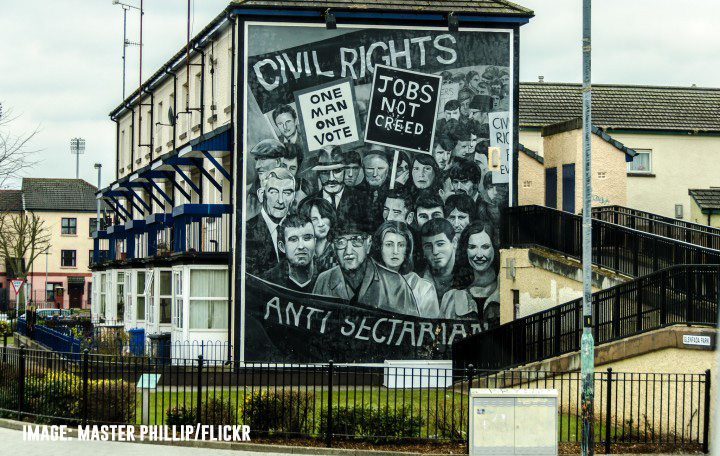 We need to sweep away the rotten edifice of capitalism in Ireland and fight for a Socialist Republic / Image: Master Phillip, Flickr

The setup at Stormont was never able, nor was it ever intended, to solve the burning problems faced by working-class people in the North of Ireland. In fact, it was a recipe for stasis. Far from solving sectarian divisions, those divisions were institutionalised to guarantee a permanent deadlock where nothing ever changes.

This was all very pleasing for those who make splendid profits from the status quo. But the status quo is now insufferable for the majority of people. COVID-19 has raised it to the level of a threat to the lives of every worker and their family members.

The likes of the DUP want to turn COVID-19 into a sectarian football. But the real division in the North is not between Catholics and Protestants but between capitalists and workers.

We need to sweep away the rotten edifice of capitalism in Ireland and fight for a Socialist Republic. By nationalising the monopolies, we could take their ill-gotten profits and put the resources needed to fight this pandemic at the disposal of workers in healthcare and elsewhere to really fight this virus.

When the economy is no longer run on the basis of profit, we can do away with the false dichotomy that capitalism poses of saving jobs or saving lives. Under a socialist plan, if a lockdown is needed to save lives, workers who can’t work could be paid 100% of their wages to stay home, while small businesses could receive all the support they need.

Only by building a revolutionary socialist party based in both communities can we create the tool needed to sweep away the rotten capitalist system, and with it the deadlock of the Stormont circus.