Share
Tweet
In response to coup plotting in both Bolivia and Venezuela, the Hands Off Venezuela Campaign, together with several other Latin American solidarity organisations, organised a picket outside the US Embassy in London followed by a highly successful public meeting, where all speakers and participants condemned the manoeuvres of US imperialism and pledged themselves to keep up the solidarity activity. 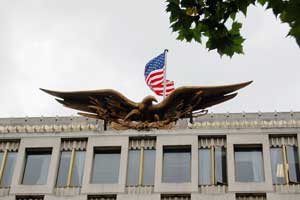 Yesterday John McDonnell MP explained why US imperialism is so concerned about developments in Bolivia and Venezuela: “What the US is terrified of is the prospect that socialism will catch light all across the Americas, so of course it has to go on the attack. But it is exactly for this moment that solidarity campaigns exist.” He explained that, “what is happening is not a personal attack on Morales or Chavez but an attack on the seeds of socialism that they are spreading.”

The occasion was a solidarity meeting held at the office of the National Union of Journalists in London, which followed a very successful picket outside the US Embassy earlier in the afternoon. In fact, yesterday, hundreds of Latin American solidarity activists and supporters participated in the two activities that were organized by Hands Off Venezuela and other Latin American solidarity groups to express their solidarity with the people of Bolivia and Venezuela.

Picket outside the U.S. Embassy 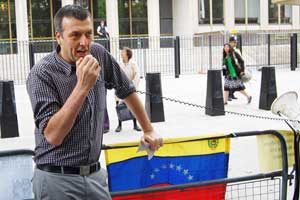 The afternoon picket outside the U.S. Embassy saw the participation of up to 100 activists. For the workers and students in Britain, the revolutions in Venezuela and Bolivia are a massive inspiration. All the more worrying it is then when these revolutions are under threat from plotting generals and fascist gangs. Many speakers throughout the day, expressed the sentiment that an injury to one is an injury to all – a defeat of the Bolivian or Venezuelan revolution would be a blow also to the workers of the world.

Many organizations were present at the picket. Jeremy Dear, General Secretary of the National Union of Journalists addressed the gathering, pointing out the fact that it was ironic that here he was protesting outside the US embassy when the Bush administration had actually nationalised more sectors of its economy in just a few days than Hugo Chavez had in the whole of the last decade! He stressed the fact that, “The US is standing up for privilege, for the interest of the few a 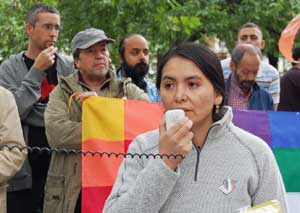 gainst the interest of the many and will go to any length to achieve it.” He warned that US imperialism would “drown the revolution in blood if it gets the opportunity,” a reference to the coup against Allende in 1973, but then added, “But there is one big difference - we are prepared, we have learned the lessons and we are already organised.” In response to this rousing speech the crowd started chanting “No More Coups” as they waved their banners in front to the Embassy.

There were speakers from the campaigns, Hands Off Venezuela, Colombia Solidarity Campaign, Bolivia Solidarity Campaign, Global Women’s Strike and Movement of Ecuadorians in the UK. Following these speeches, others attending the protest, workers and students from Colombia, Bolivia, Britain and Chile took the opportunity to express their solidarity with their brothers and sisters in Venezuela and Bolivia and their opposition to U.S. imperialism.

Meeting at the NUJ

The evening meeting was packed with over 100 people in attendance. The first to speak was John McDonnell MP, as we have reported above. He recalled the experience of Chile in 1973, and stated that solidarity had to be expressed now. “As soon as I return to Parliament I will raise this issue on the floor of the Commons”, said John. He was followed by Beatriz Souviron, Bolivian ambassador, who gave an update on the recent massacre by fascist gangs in Bolivia. Felix Plasencia from the Venezuelan embassy also spoke, expressing his gratitude to the assembled meeting and the organizers for the support they had shown for the peoples of their countries.

Alan Woods, founder of Hands Off Venezuela, was next to speak. He argued that the people had to be armed in order to defend the revolution from the coups and also cited the example of Chile 35 years ago. “The example of Chile and now of Bolivia shows that a revolutionary government can't trust the army to defend itself”, stated Alan. He went on to attack the oligarchy, the capitalists, landlords, who were the “main enemy to the Revolution”. He added that, “Only their overthrow would advance the cause.” Alan concluded by saying that if Hugo Chavez was here, he would say that the best way to help the Bolivian and Bolivarian revolutions is to fight for socialism in our own countries.

Amancay Colque from the Bolivia Solidarity Campaign explained the details of the Bolivian massacre and how non-violence in the face of armed fascist gangs becomes absurd. She explained how in Pando state, the reactionary governor had hired mercenaries to machine-gun rural workers who support Morales. She also stated that the oligarchy is backed by companies in the US and European countries. “Our enemy is also imperialism”, she said.

The meeting expressed its anger at the conduct of the prefects of Bolivia who had plotted with the U.S. Ambassador against the democratically elected president of the country. Many called for those responsible to be put on trial. The U.S. was repeatedly condemned for its meddling in the affairs of Bolivia and Venezuela and many speakers expressed their support for the expulsion of its ambassadors. In fact, whenever this call was issued during the meeting there was loud cheering.

At both events, frequent mention was made of the blackout in the media. How can it be that when 30 poor peasants are massacred by fascist gangs, this news warrants no mention. And yet, mainstream media such as the BBC and CNN have no qualms in implying that Evo Morales is some kind of dictator. A great deal of anger was expressed at the media's silence on the coup attempt.

Long live the revolutions in Venezuela and Bolivia!
Down with U.S. imperialism!