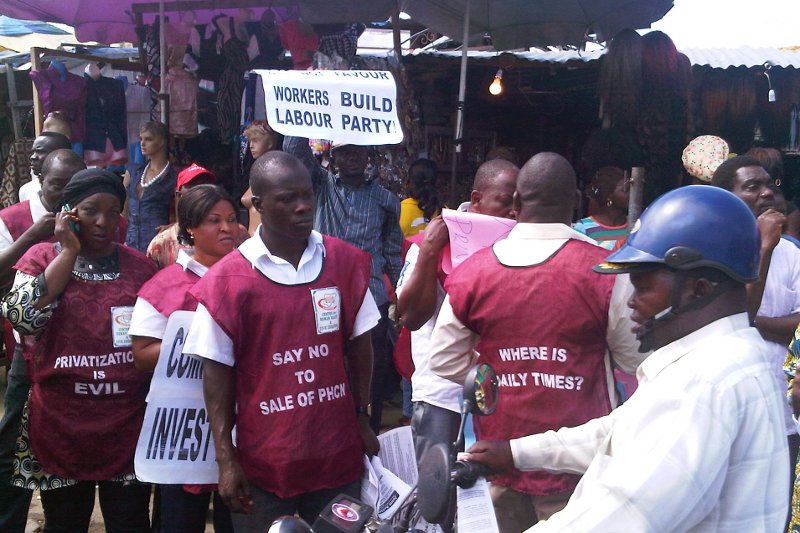 The Nigerian ruling class continues to lose its social base. And rather than this process being reversed, it is accelerating. The main social base upon which this present bourgeois democratic experiment bases itself has been almost completely eroded. The ruling class finds itself more and more isolated from the ever increasing mass of Nigerian masses.

More and more Nigerian masses are joining en-masse the ranks of those more advanced layers who are correctly sceptical of the possibility of the Nigerian ruling class solving any of our fundamental problems. All the attempts of the ruling class to reverse their misfortune have been unsuccessful. How could it be otherwise?

When at independence in 1960, per capital income was $2000 while it was just barely over $200 as at 2006, when life expectancy was almost 70 years in the 1960s but just a little over 40 years now, when over 40 million Nigerian youth are roaming the streets looking for jobs and survival. Nigerian Universities were among the best in Africa in the 1970s and 80’s but have now completely collapsed and are no longer rated even within West Africa?

All this is a recipe for a decisive and aggressive battle between the haves and have-nots. The present situation is pushing forcefully towards an all-out fight between the thieving, inept, mafia-like Nigerian ruling class and the Nigeria masses. Everything is pointing to one thing and just one thing: a big battle is imminent. Therefore, the big question is, how is the Nigerian ruling class preparing for this battle and how are the Nigerian masses also preparing for this major onslaught? While Goodluck Jonathan is helping the ruling class to mark time through deception, Babangidda is preparing for a civil war against the masses, but the question is: who is going to lead the masses?

“The theory of Marxism, as Marx himself wrote in the introduction to his work ‘Critique of Political Economy’, established approximately the following proposition with regard to revolution: No social system departs from the arena until it has developed the productive forces to the maximum degree attainable under the given system; and no new social system appears on the scene unless the economic premises necessary for it have already been prepared by the old social system. This truth, which is basic for revolutionary policy, unquestionably retains all its meaning as a guide for us to this very moment. But more than once has Marxism been understood mechanically, unilaterally and therefore erroneously. Wrong conclusions may likewise be drawn from the foregoing proposition” (Leon Trotsky, A school of Revolutionary Strategy).

If the above proposition from Marx is correct, why then has capitalism continued to survive in Nigeria; when in the 1970s manufacturing was 14% of GDP and presently less than 1%, when urban unemployment was 10% in the 1970s but is now over 40%, with decaying infrastructure, an inability to generate more than 3000 Megawatts of electricity when the actual need is over 67,000 Megawatts, when, most unfortunately, Nigeria has been demoted from a net exporter of food to one of the world leading importers of staple foods?

It would be naïve of anybody to expect a dying socio-economic system to just honourably excuse itself out of the way of people’s progress; it will not commit historical suicide, but will rather continue dragging on until it is overthrown or else it will continue to destroy everything in its wake. Behind every socio-economic system are human beings who are actually benefitting from it. These human beings will readily go to any extent to save the system upon which their livelihood depends. As it is for humans, so it is for socio-economic systems. When its life is in danger, it will mobilise all its reserve forces and make all frantic effort to survive. Capitalism in Nigeria is not an exception; it is mobilizing all its social weight and reserve energy to continue dragging the Nigerian masses into an unfortunate abyss. It mobilises religion, the army, the police, uses deception and the forces of tradition to fight its way through despite the enormous amount of blood dripping from all its body.

What does this division consist of? A section of the Nigerian ruling class (Jonathan and co) is saying “let us continue deceiving the Nigerian masses, let us blame this or that man for all the problems, let us present to them another gentle face as their leader so that they won’t revolt against the system, a system which is the real culprit”. Another section (Babangidda and co) says “stop there” to their colleagues and reason to the contrary, saying, “we must stop all these deceptions at once and face the reality of the situation, get our police and army ready for an inevitable battle with the Nigerian masses on the streets.” They reason that, “if we continue deceiving the masses will keep having hope where there is no hope, faith where there is none and they keep asking for what we cannot give, they will then revolt against the system because all the promises are not met and they see us too weak to stop them from overthrowing our cancerous system, therefore the best option is to have a strong leader to keep the masses mouth shut”.

Both of them are right and both are wrong at the same time. Despite the gentle and pretentious posturing of Jonathan, it does not prevent the Nigerian workers from militantly asking for their rights; the last strike by NUEE and the preparation for another round is a striking confirmation of this observation. As their colleagues in other section rightly warn, no amount of pretentious and futile promises will prevent the Nigerian masses from challenging this useless and inefficient ruling class. The destination of this deceit leads to a powerful battle.

The other section too is wrong because, no amount of preparation and intimidation can cow the Nigerian masses led by organised Nigerian workers from struggling for their survival. The rank of the military they rely on for protection is very angry with them; their colleagues who are presently imprisoned for legitimately asking for their salary are heroes. Although the rank and file of the Nigerian army is quiet now, in the upcoming decisive battles the soldiers will realise that they are just ordinary workers in uniform. They will fraternise with their brothers and sisters in the workplaces. The coming battle is a battle for survival; it is about bread, shelter and clothing.

Most unfortunate in this whole episode is the hue and cry of the NGOs and some pseudo-lefts who keep shouting about “One Man, One Vote” without any substance. They ask the Nigerian masses to “vote right and vote wisely”. But when it comes to who to vote for they keep mum. What does this call mean? They want the masses to choose between death by firing squad or death by hanging; but alas death is death, whichever way it comes.

This is the time to aggressively and quickly build an alternative platform to struggle and to win power. Now is the time to build our political alternative, to march behind the working class under a genuine, courageous and determined leadership.

In today’s society, of all the social classes, only the working class is in the best positioned to lead the other oppressed classes out of the ruinous domination of the ruling class. Who can deny this in Nigeria? Who led us to fight against destructive policy of the Obasanjo regime on the “oil subsidy”? Who led all the oppressed strata against the burdensome VAT that the Yar’Adua regime wanted to impose on the working class? There are 10 million organised Nigerian workers and a total of 57 million working people, an enormous power.

The Nigerian working class is one of the most powerful in Africa, in terms of numbers and influence, but as Trotsky always emphasised, the “working class is potentially very powerful, but without organisation and bold, revolutionary leadership, the working class is just a mere raw material for exploitation”.

The working class requires its own political party, completely independent of the bourgeois influences and prejudices. And interestingly enough, the Nigerian Labour Congress formed its own party, which was hailed by all progressive elements, but no effort has been made to boldly and energetically mobilise the rank and file of the Nigerian workers into the party. As the Nigerian ruling class is getting set for a violent attack on working people in Nigeria, the only preparation we can hold on to is to double our efforts in building a Labour Party and insist on the independence of the party.

The time is now for all the vanguards of the working class to move from factory to factory and office to office, mobilising all the best elements of the working class into the Labour Party and collectively evolve a genuine leadership, a leadership that is bold, honest, tested and truly capable of leading us out of the quagmire that the Nigerian ruling class has immersed us in.