To an ordinary sincere observer, a recent clampdown on a few corrupt officials by the Obasanjo administration is just a difficult to unravel riddle. How come an Obasanjo who did everything possible to cover up the certificate forgery scandal of the then speaker of the Federal House Of Representatives (Alhaji Buhari), even planned to reinstate him back after impeachment, could have become a saint overnight? Is this the Obasanjo who entered a deal with Abacha’s son, that all that he wanted back was half of what they stole? Now this same Obasanjo is prepared to stake everything to imprison these criminals. 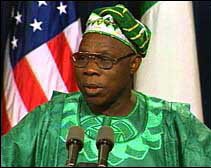 Obasanjo has been part and parcel of various criminal acts that took place in Anambra, and he even protected his brother-in-law (Chris Mba ) who was the major criminal in the acts. But now, interestingly enough, Obasanjo has publicly denounced his own wife, he has sacked his best friend in the Police force and has sacked his former close confidants in the executive. However; you and I know that every member of the Nigerian ruling class is corrupt, it goes beyond one or two scapegoats. So why the sudden change of mind?

Why the sudden change?

Obasanjo’s regime is very desperate to conclude its anti-working class policies it had embarked on since coming to power. Over 4,000 jobs are already awaiting termination in addition to over 5000 that had already gone. More people are falling below the poverty line, and more students are dropping out of school as a result of exorbitant charges. The price of petrol increases as it pleases his lordship. People continue to languish in penury and the highest levels of insecurity.

It is absolutely impossible for people to continue watching, while their present and future are being brutalized like this. People have to fight back and they have been fighting back. Since Obasanjo has no solution to their problems, and he must continue his attacks because they are dictated by the powerful forces of capitalism. At the same time, he cannot curtail the anger of the people; his only option remains a pretentious attack on a few scapegoats and a desperate search for a credibility that has long been lost. It is the same factor that forced Obasanjo to embrace his fashioned National Conference that is forcing him to pick on 0.000001% of the corrupt officials. If we attack these few thieves, people will think they are the cause of their woes, so says Obasanjo, but for how long can you deceive the people? Obasanjo is one of the richest Nigerians and he has never worked outside Government milieu, so where has he made his Billions?

Why are they so corrupt?

Like any other ruling class of any “third world” country, the Nigerian ruling class has corruption as its surname. They are corrupt through, through and through. In an economy where over 60% of the capital belongs to foreign capitalists and close to 75% of GDP leaves the country in the form of capital flight, the only option remains for the local capitalists to enter into the public purses and appropriate the public funds. No free and fair method of capital acquisition is available for them; they have to build houses scattered around world, they need to drive the most expensive cars, they need to live like real capitalists. But unfortunately for them no capital is at their disposal, but public wealth. Therefore, corruption in Nigeria like in other developing economies has an objective basis. It is the only way in which the local ruling class can accumulate funds under this system. With more privatisation of our public wealth, we get more subservient to the foreign domination and more corruption and more crises. Obasanjo knows this but he cannot face the facts, because he himself is a product of these anomalies. Presenting it to us as if there are only four or five corrupt officials, is only a shameful and deceptive show. For as long as the system that places the wealth of the people in the hands of few individuals exists, corruption will continue and will get worse and worse.

What is the way forward?