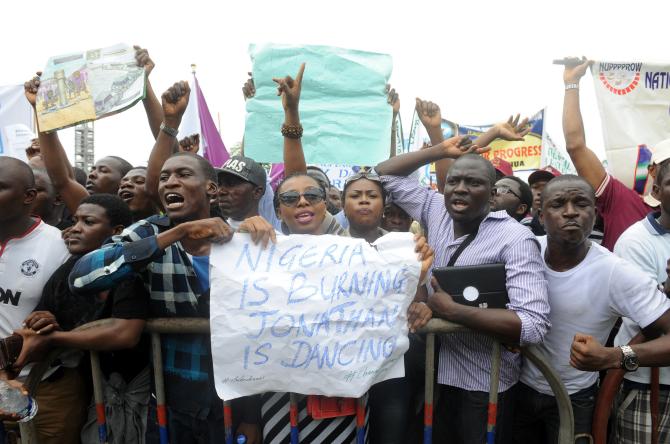 Although the barbaric acts of Boko Haram have the attention of many, there is another process taking place within the mass of Nigerian workers and poor.

In January 2012 we saw a mass movement of unprecedented dimensions. That has left its mark on the consciousness of workers and youth, and this was very evident in this year’s Mayday rally in Lagos. What happened on that day openly reflects the rising class consciousness and growing militancy of the working class and other poor strata of the society.

This is not in any way surprising as it comes at a time when the masses, after suffering years of attacks from the various draconian policies of the Nigerian ruling class, are eagerly looking for alternatives and not prepared to continue to be on the receiving end.

For one, this year’s Mayday was characterized by numerous protests against not only the PDP-led national government, but also and equally intensive against the pretentious APC regime in Lagos State. In fact, the situation got out of the hands of trade union leaders who thought that it would be business as usual. They thought that Mayday would be a jamboree as usual, where they would invite the governor and several enemies of the Nigerian workers to the high table and afterwards cut cakes and have parties. They thought it would be a rally where they could make boring and empty speeches and call on the governor to arrogantly talk down on workers.

They never anticipated the protests and mass anger. The mood for mass action has been building up for some time in Nigeria and in Lagos. Tensions have been building up among Lagos State University [LASU] workers, lecturers and students over outrageous fee hikes, which has triggered off the outright collapse of the university; and the APC state government has further cut down funding.

The Lagos state civil service workers are under pressure to fight back. Aviation sector workers are preparing to fight the impending attack on them by the PDP federal government that is planning to merge aviation agencies and massively downsize the workforce, and there are those layers who are genuinely angered by the continuing degeneration of the security situation in the country a situation that has led to bombing and the kidnapping of scores of school girls. The list is endless.

In fact, the day before Mayday, April 30, workers, lecturers and some students of LASU, against all odds, held a united mass meeting called by the JAF [Joint Action Forum] in LASU where it was resolved that there would be a protest march on Mayday calling for the total cancellation of the fee hike in LASU, against the terrible conditions of service and for better funding. This was in spite of the reactionary role played by the leadership of the LASU authority backed students’ union leadership. These elements, acting out a script written by the school authority, tried to stop the meeting from holding.

However, in spite of this, the workers, lecturers, several students’ and JAF activists turned out massively to protest on Mayday. The JAF-led protest commenced miles away from the Onikan stadium venue of the Mayday rally. The police had earlier tried to stop the protest but were overwhelmed.

The aviation sector workers’ protest also started in the morning hours of Mayday. The workers moved round their various units before coming down to the venue of the Mayday rally with their banners and leaflets condemning the attempt by the Goodluck Jonathan’s regime attempt to lay off thousands. The protest against the deteriorating conditions in the country, led by Seun Kuti also commenced from outside Onikan stadium and the police also made attempts to stop it.

By the time the mass of workers had gathered the situation was quite charged. The arrogant governor of Lagos, Babatunde Fasola, had never been humiliated like this before. The LASU-JAF movement received massive support from workers, to the extent that the labour leaders were forced to allow the JAF secretary, Abiodun Aremu, to address the workers. This is probably the most radical speech made on Mayday in Nigeria for a very long time. The effect of the speech and protests on the governor was quite visible. He spoke immediately after and everything he said was to try to reply to the speech. He was visibly shaken.

After the governor’s speech the attempt by the Lagos State NLC leadership to continue with the programme of the Mayday march-past failed as more protests continued. They had to call off the march-past and close the programme.

We were actively present throughout the entire process. The Campaign for Workers’ Alternative, the Nigerian section of the International Marxist Tendency, is also part of JAF in Nigeria. We were there with the special edition of our paper which was well received. A total of 132 copies of the paper were sold at the rally.

What is even more significant is that we also participated in the Mayday events for the first time in Kano. Although the Kano APC government stopped the rally with armed police, comrades were still able to get to the venue and later sold close to 30 copies of the paper. The radical NLC leader was also arrested.

Overall, the outbursts at the Mayday events reflect the growing radicalization of the masses and class polarization in the country. It is clear it is only a matter of time before the masses, in spite of all odds, storm the streets.

The bourgeois media made attempt to cover up the development by under-reporting the events; however, they were still forced to acknowledge that protests happened.

Here we provide the report of the Mayday events in Kano from comrades on the ground:

The May Day rally did not hold in Kano. The chairman of the state NLC was taken into Secret Service custody and the state NLC Secretariat was taken over by heavily armed police. The reason given by the government? “Boko Haram could use the disorder to cause mayhem.” This was the same reason given when pro-ASUU student protests were suppressed. But as the NLC chairman in Kano repeatedly said, the "delicate" security situation does not stop the bourgeois parties (APC and PDP) from carrying out their rallies.

What explains this paranoia of the ruling classes towards organized labour in Kano? One reason is this: the January 2012 Uprising came closest to an insurrection in Kano; the youth actually stormed the state government house in protest. The police responded by opening fire, killing and injuring many protesters. Secondly, when the NLC national body betrayed the January 2012 Uprising, by calling off the general strike and protests, the Kano State NLC chapter vowed to continue the strike under the leadership of comrade Isa Yunusa Danguguwa. This brave labour leader vowed to continue the struggle even if that meant his resignation from the post of state NLC chairman. The Kano movement was halted only by the explosions and gunfire of Boko Haram on the eve of the planned protests. That was after armed men brutally beat up another brave labour leader, the ASUU president BUK.

The repression of organized labour in Kano is reflected in the personal ordeal of state NLC chairman, comrade Danguguwa. The government had tried to dirty his name by linking him with the January 20 2012 Boko Haram attack in Kano and had been harassing him for some time.