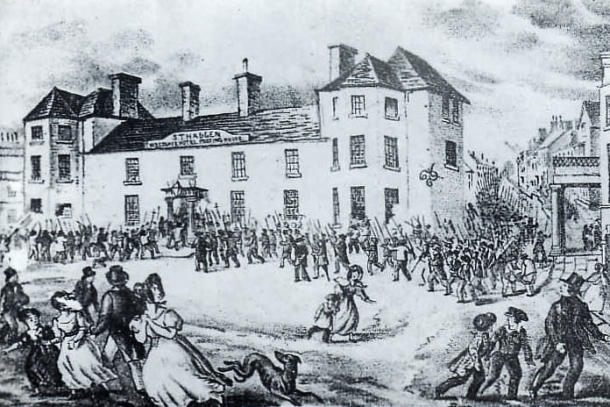 On the night of 3-4 November 1839, workers in Wales launched an insurrection known as the Newport Rising. These events are vividly discussed in Rob Sewell’s new book ‘Chartist Revolution’. Get your copy today to find out more.

181 years ago, the 18 year old George Shell prepared to join 20,000 to 30,000 colliers and ironworkers in an armed uprising in Wales. He wrote a letter to his parents, which survives to this day as a testament to the revolutionary self sacrifice of these workers.

The rebellion that George Shell participated in became known as the Newport Rising, and was part of the wider Chartist movement.

In order to achieve the demands of Chartism, the workers had first presented a ‘Great Petition’ to Parliament. This demanded, among other things, a vote for all men over the age of 21. However, the ruling class refused to grant this demand. They recognised that the Charter was not just a polite request for the vote. It was a catalyst that channelled the anger and hatred of the working class.

Once the petition was refused, workers across the country moved into action. They drilled, bought illegal weapons, and planned uprisings. Finally, the Chartist leaders in Wales decided on an armed attack on 3 November, hoping to capture Newport.

The Chartist forces marched overnight and arrived the following morning, on 4 November. But the authorities had been informed of what was happening and had reinforced the town. In the end, the troops opened fire.

There were officially twenty dead, some fifty seriously wounded, and many more injured. One of those who died was the young George Shell. His letter to his parents was found pinned to his clothing.

Although the Newport Rising may have failed, 181 years later it still shows the revolutionary history of the British working class. This history has been buried and forgotten about for over a century, and there has never until now been a genuine Marxist history of Chartism. 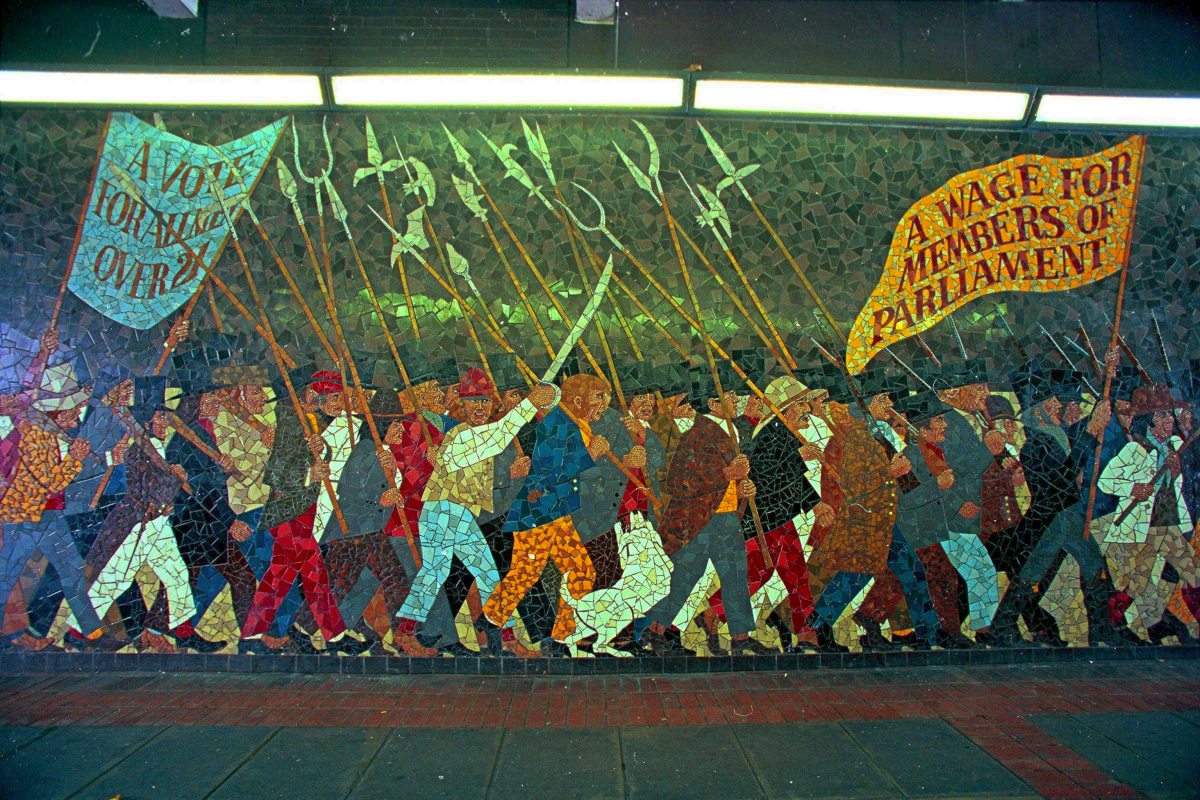 Although the Newport Rising may have failed, 181 years later it still shows the revolutionary history of the British working class / Image: public domain

By the summer of 1839, Chartist leaders in England were convinced of the need to take action to achieve their aims. John Frost joined other Chartist leaders in a plan to promote a general insurrection in Yorkshire, Lancashire, Birmingham, Sheffield and South Wales. Details would remain somewhat hazy. But on 3 September a meeting was told of plans for an uprising in Wales, scheduled for early November.

Rob Sewell goes on to explain what happened next:

... the South Wales valleys were in a state of near insurrection. Pike-making and drilling became extensive, while the authorities did not have the forces on the ground to prevent such activities…

Towards the end of October, after a huge growth in Chartist numbers, John Frost, William Jones, and Zephaniah Williams had finally decided on an armed attack on 3 November, hoping to capture Newport…

Newport was a convergence town that served the collieries and ironworks, and was therefore of strategic importance. This was most certainly part of a much wider plan, with uprisings planned in different areas of the country, particularly in Lancashire and West Yorkshire. The forces that they were assembling were viewed as part of a massive workers’ army that would spearhead a national Chartist uprising.

The Chartist forces were formed into three armed columns, made up of around 20,000 to 30,000 colliers and ironworkers…The columns were further split up into brigades, companies and units, and the men were armed with guns, muskets, pistols, coal mandrills and clubs.

The original plan was for a surprise night-time attack. However, faced with worsening weather conditions, the going got tough and the time line changed. Despite these delays, the columns marched in military formation overnight, thousands strong, from Nantyglo, Pontypool, Blackwood, Newbridge and Risca. However, they did not reach Newport until the following morning, 4 November.

The authorities had been informed of what was happening and acted accordingly, reinforcing the town with police, special constables and troops from the 45th Infantry Regiment. The unreliable 29th Foot Regiment had been withdrawn and replaced with more reliable, tried-and-tested infantry, which had put down a revolt in cold blood the previous year. The authorities had rounded up local Chartists and held them at the Westgate Hotel in the centre of the town. The insurgents were informed about the prisoners held at Westgate.

Unfortunately, rather than wait for reinforcements, they headed straight for the hotel, anxious to free their comrades. Other contingents were advancing on Newport, and thousands more were still stationed in the surrounding areas. In the end, the early Chartist insurgents crowded around the hotel at around 9 o’clock in the morning, facing about forty government troops who were waiting within. Apparently, the Riot Act was read. Then the troops opened fire, with several volleys, after claiming they had been fired upon…

Without cover, the Chartist insurgents had been dangerously exposed. In the end, faced with several rounds of firing, the crowd scattered and fled. There were officially twenty dead, some fifty seriously wounded, and many more injured…

The leaders of the rising, disorientated by the initial losses, staged a disorderly retreat, pursued by troops. When the musket smoke cleared, and the dead lay all about the ground, it was clear the attack had been defeated.

Thousands of insurrectionists were still stationed in surrounding hillsides and villages. However, the orders to advance never came. Skirmishes lasted for several days afterwards, as more troops were sent to secure the town. Order was restored at the point of a bayonet, under the stewardship of the town mayor.

The Newport massacre put an end to the Chartist insurrection in South Wales, although the authorities still believed further attacks were imminent. It also put paid to the idea of a national insurrection.

The defeated insurrectionists now found themselves isolated. The Chartists in the north of the country – due to a lack of serious preparation – failed to respond. It is true that revolts later broke out in Sheffield, Dewsbury and Bradford, but these were short lived and easily suppressed… In total, 125 men and women were seized and presented for trial. Sixteen prisoners were indicted for high treason, while twenty-four faced lesser charges of sedition, conspiracy and riotous assembly.

The Newport trial was one of the last mass treason trials in British history… A Special Commission of judges ruled over the two-week-long proceedings, after which, surrounded by soldiers, Frost, Williams, Jones and five others were found guilty. In sentencing the men, the learned judges placed the black caps of death on their heads. The Chief Justice addressed the eight prisoners, stating they “were to be taken to the place from whence they came, and from thence to the place of execution, there to be hanged by the neck until they were dead – afterwards, their heads should be severed from their bodies, their bodies quartered, and disposed of as Her Majesty should think fit”. He then concluded by asking the Lord to have mercy on their souls.

These courageous Chartists of Wales stood their ground and refused to flinch. As they left the courtroom in Monmouth following the sentencing, Williams defiantly shouted to the crowd, “Three cheers for the Charter!”

The Newport massacre and the threat of executions, rather than leading to demoralisation and despair, served to intensify the angry mood. Astonishingly, there was increased talk of revenge and insurrection...

The government became aware of the grave situation, and although vengeful local magistrates demanded the severest of measures against the Welsh leaders, there were those who urged caution for fear of turning the men into martyrs. It became increasingly clear that executions, together with the mutilation of the condemned men, could easily inflame the situation, resulting in further social unrest.

On 1 February, the Cabinet discussed the question and cooler heads prevailed. The men were saved from the gallows, and their death sentences commuted to transportation for life. This proved a wise decision for the ruling class under the circumstances. The mood in the country was an angry one, with talk of sedition and plans to rescue the men.

The Newport rising was over in a relatively short period of time, but this is in the nature of insurrections, which are normally not drawn-out affairs, but decided one way or the other very quickly. The deliberate attempt to downplay the rising must not be allowed to minimise this truly historic event…The Newport rising must be seen as the first generalised insurrection of the new industrial proletariat. It certainly reflected the insurrectionary mood of the times, and not only in South Wales.