New Zealand
Share
Tweet
Wages are abysmally low for supermarket workers in New Zealand. Recently the National Distribution Union organised a 48-hour stoppage. The bosses reacted with a lock-out. This has only served to strengthen the resolve of the striking workers. Send messages of solidarity and protest. 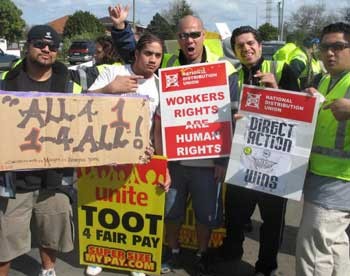 Australian owned Progressive Enterprises, the owners of Countdown, Foodtown and Woolworth's Supermarket chains in New Zealand, have locked out workers belonging to the National Distribution Union at there three distribution depots in Auckland, Christchurch and Palmerston North, after a 48-hour stoppage over the right to a national collective bargaining, which the new Australian owners have reneged on, and an 8% pay rise. The workers are on or about the minimum wage and are paid different rates at each of the depots for doing the same job.

To date the strike is solid and supermarket shelves are emptying. The strikers have sent out flying pickets to supermarkets after the union learnt that the company had set up a scab depot and are also trying to get deliveries direct from the manufacturers to the stores. The pickets are turning deliveries away from stores and are explaining their case to the shop workers, who have been instructed by the union not to unload deliveries.

The union has served an injunction on the company in the employment court to stop the scab depot from operating. At the time of writing the judge has ordered both sides into mediation for a second time, before he will give his ruling on the matter. The first attempt at mediation failed when the employers walked out. The union is clear that the dispute will not be settled in the employment court but on the picket lines and the Council of Trade Unions has given them their full support, and asked for solidarity. These are fine words but they need to be backed up with action from the CTU.

This strike is a symptom of the creation of a low wage economy, a direct consequence of 'rogernomics' which deregulated the economy in the 1980's ,shamefully carried out by the Labour Government of the time and pursued with glee by the National Government in the 1990's. The New Zealand economy is booming at the expense of workers here in NZ who are being squeezed at all levels to keep corporate profits high. Obviously the Labour Government's attempt at achieving social peace by the introduction of Family Tax Credits to boost the pay of the low paid is failing and workers' patience has broken, in particular as the government will not put up the minimum wage unless NZ can afford it! It is quite clear that none of this will change unless the Labour Government abandons its pro-capitalist policies and adopts bold socialist policies that can rid New Zealand of the scourge of poverty pay.

Messages of solidarity to: ndu@nduunion.org.nz 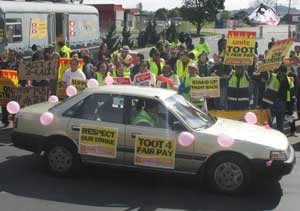 Progressive (Woolworths, Countdown and Foodtown) control 44% of the market and has recently been bought by Woolworths Australia.

Foodstuffs (Pak N Save, 4 Square and New World) has about 56% of the market. Each Pak n Save, New World and 4 Square is owned by a different employer, and those employers together own the wholesale businesses and the house brand, "Pam's"

The two chains had sales of more than $10 billion between them last year.

Woolworths Australia is a gigantic company with turnover of $A32 billion last year, excluding Progressive Enterprises.

Supermarkets disproportionately employ migrants, pacific islanders, maori, youth and women who are the lowest earning workers in New Zealand. Compare this with the all white Central Foodstuffs board.

Further background information from the union

How much do they charge their customers?

One argument that the Australian owners of Progessive Enterprises make is that they can't pay their workers as much as their Australian workers because their costs and the cost of living are higher there. But any kiwi who has crossed the ditch or has family living in Australia know this is not the case.

You only have to compare the prices of some basic items sold by Woolworths on both sides of the Tasman to see that not only do their Aussie staff get paid more, but their customers get charged less.

With food prices skyrocketing, those on low and minimum wages are hit hardest.

What about the suppliers? 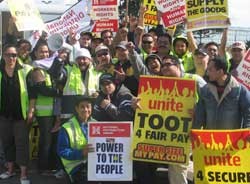 Suppliers to both Foodstuffs and Progressive have been raising concerns recently about the pressure on them to cut their selling price to these companies.

The consolidation of supermarkets into two companies has increased their control of the food supply chain which allows them to pressure suppliers to depress their prices.

One concern suppliers have is the requirement to provide enough product for both NZ and Australia which could put small suppliers out of business.

When you think about how much of your family income you spend at the supermarket - let's say 15% - and you multiply that by all households - you can begin to imagine what gigantic businesses supermarkets are. We spend over $11 billion at the checkout each year. That means nearly $1 in every $10 spent by individuals, government and businesses each year is spent at the supermarket

How much do they pay their workers?

Between 2001 and 2005 wages increased more slowly in wholesale and retail jobs than the average for all jobs. This means that already low-paid supermarket workers have fallen further behind other workers. Over this four year period, overall wages had risen by around ten percent. But in the retail and wholesale trade sector the increase was only around eight percent, meaning a yearly increase of only two percent. Because the increases were below inflation it meant we had been earning less every year.

Our campaign at Woolworths, Countdown and Foodtown last year that won us a 60 cents an hour pay rise was the biggest pay catch up we've had since the 1990's when the Employment Contracts Act dragged supermarket wages way down.

But there is still a long way to go. A significant proportion of supermarket wages losses came from the removal of penal rates - which most young workers haven't even heard of. All New Zealand supermarkets are still paying youth rates and it's time they stopped.